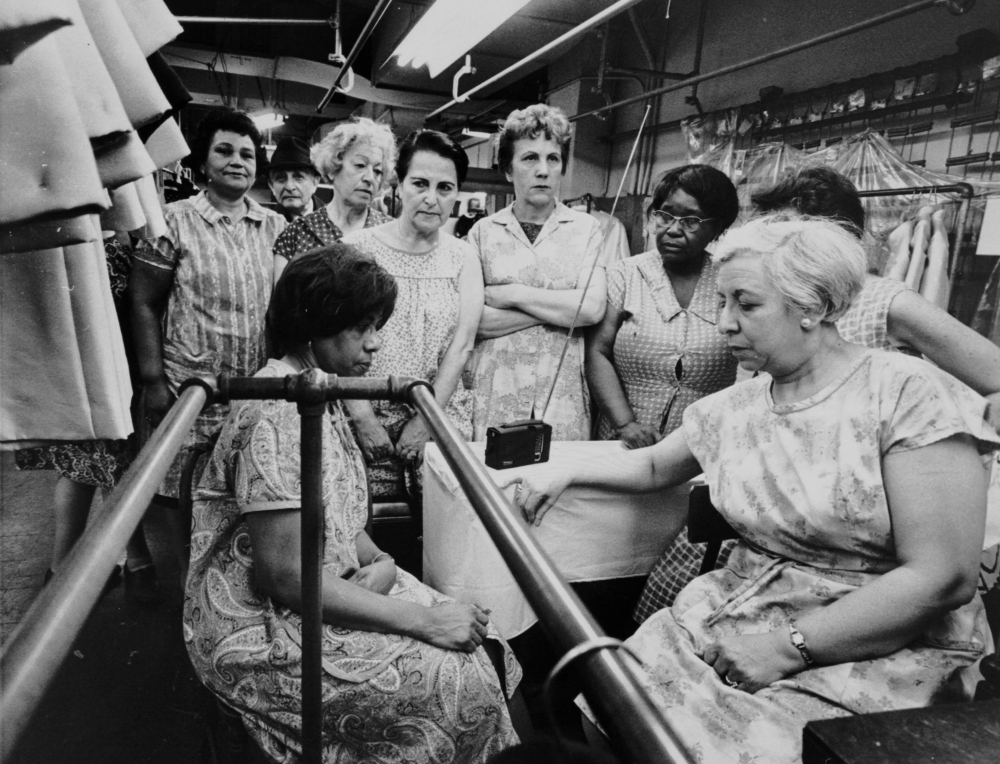 Fifty years ago today, the Rev. Martin Luther King Jr. was killed in Memphis, Tennessee. His funeral is the first public memory I have, that is, a memory linked to a public event. I remember my mother was baking a pie and she used to roll up the extra dough with cinnamon and sugar. She brought some of these into the TV room where I was watching King's casket drawn by two mules through the streets of Atlanta. I was 6 years old and did not understand the greatness of the man who was being buried, but I knew something extraordinary was taking place.

Regrettably, it was something seminal as well as extraordinary. The assassination of King was the first of many public memories for me, but also the first of many events that shook the nation to its foundation.

It was only a couple of months later that I remember kneeling with my family in front of that same TV as we prayed that Bobby would live. Another two months later, we watched our state's senator, Abraham Ribicoff, get heckled by Mayor Richard Daley at the Democratic National Convention. Vietnam. Watergate. Reaganomics. Iran-Contra. Two Iraq Wars. Monica Lewinsky. Trump. It all seems a blur of social and cultural regression, starting on the balcony of the Lorraine Motel in Memphis 50 years ago.

I did not know then, and did not know for many years, how great a man King was. Only when I read Taylor Branch's magisterial three-volume biography of King did I recognize how great a man he was. I am a slow reader but I dashed through those volumes. I took them on the metro, read them in bed, did not finish the newspaper in the morning so I could return to them.

That is, until the last 100 pages. Until Memphis. I did not want to confront the dreadful ending of this man's story. I did not want to be dragged back to my family's TV room in 1968. Over the course of several days, I finished the book and understood how great was the loss this nation had sustained when it lost King.

King was a great civil rights leader because he was both a great American and a genuine Christian prophet, not the other way round. A prophet does not simply point to some future of his or her own imagining. A prophet calls a people to return to their truest selves in order that they may return to a righteous path.

King did not tell the American people to stop being American. He told them to be true to the ideals that they claimed had shaped our national founding. His message was subversive of the ways those ideals had been betrayed, not of the ideals themselves. King evidenced none of the hatred of America that has marred the politics of the left since his death.

King also invoked repeatedly the universalist impulses of the Christian faith. His trip to Memphis that day was not only to support the striking sanitation workers in their fight with Mayor Henry Loeb. The month before, King had gone to Memphis and violence had broken out. A group advocating "black power" claimed credit for that violence. This was anathema to King's deep commitment to nonviolence, obviously, but it also offended his Christian belief in the common brotherhood of all in the common fatherhood of God. His second, and fatal, trip to Memphis was also about reclaiming the leadership of the civil rights movement for the Gospel vision of inclusion. 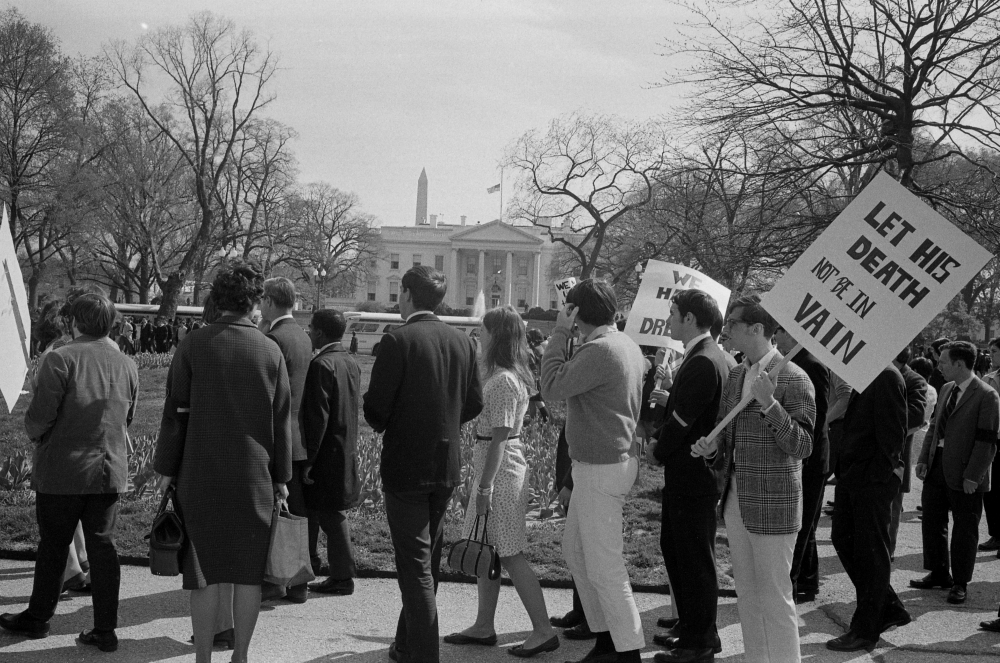 Demonstrators march in front of the White House in Washington, D.C., after the assassination of the Rev. Martin Luther King Jr. in April 1968. (Library of Congress/U.S. News & World Report Magazine collection/Marion S. Trikosko)

I noted above the sense of decline in our national moral fabric since his death, but how disappointed — and befuddled — would King be by some of the sectarian tropes found among some leaders of the black community today. Let me offer one example. Last year, Jenn M. Jackson, a doctoral candidate at the University of Chicago "with a graduate certificate in Gender and Sexuality Studies," who has published op-eds at The Washington Post, criticized other African-Americans for praising a performance by Bruno Mars at the BET Awards. She was concerned that Mars committed the crime of "cultural appropriation." Jackson tweeted of Mars: "He is a non-Black person of color (POC) who has recently decided that singing Funk music is economically productive."

I know I am biased because I enjoy nothing more than listening to a Spanish soprano singing an Italian opera conducted by a German. But, seriously, can you imagine King saying anything even remotely like that?

But let us not focus on the decline since King's death, not today. Let us remember his courage. Today, when protesters get arrested, it is a public relations device. King did not know if he would survive his trips to jail.

He understood the power of mass communications before "mass communications" became a term of art: The images of his arrests were not there to show his shackles; he wanted people to see the dogs and the water cannons and the hatred in the faces of his detractors.

Let us focus on King's ability not only to bring people of different races and religions together, but also his ability to see how different issues were intertwined. He had gone to Memphis, after all, to support sanitation workers who had voted unanimously to form a union and he sought safer working conditions after two of their colleagues, Echol Cole and Robert Walker, had been crushed together by a garbage compactor.

Justice, for King, was a many-sided objective and injustice a Hydra of wrongs. He sought solidarity with all who sought justice and he recognized in the efforts to organize the workers in Memphis an instance of solidarity he could not ignore.

King's work in the South to dismember legal segregation was important and pivotal, but it was not enough. African-Americans were also a large part of the economically disenfranchised working class, in both the North and the South. Voting rights were important but they did not put food on the table. While he was in Memphis, he continued to plan the Poor People's March on Washington scheduled for later that year. I wonder sometimes how he would have confronted the achievements, and the unintended negative consequences, of the War on Poverty.

Nonetheless, one legal change has had an enormous, and I am hopeful eventually definitive, consequence on the amelioration of race-based hatred: ending the ban on interracial marriage. Every year, more and more Americans of different races intermarry, and the highest rates of interracial marriage are found among the young. This gives me hope. Despite all the obvious persistence of racism and bigotry in our nation, this gives me hope: Love is colorblind.

When our Holy Father addressed Congress in 2015, he singled out four Americans by name, two Catholics and two non-Catholics. The non-Catholics were Abraham Lincoln and King. It can be fairly said that Providence has sent the United States one American per century who truly rekindles the promise of American democracy, who taps into the moral force of our egalitarian ideals and articulates them in idioms that are necessarily religious but not sectarian. In the 19th century it was Lincoln, and in the 20th it was King. We have not seen his like since he was killed this day 50 years ago.

May he rest in peace and may his memory stir in all of us a renewed commitment to a peace, a justice and a solidarity of a breadth and depth worthy to be mentioned afresh in the same breath as the name of the Rev. Dr. Martin Luther King Jr.

Read this next: Merton and King: spiritual brothers who never had a chance to meet