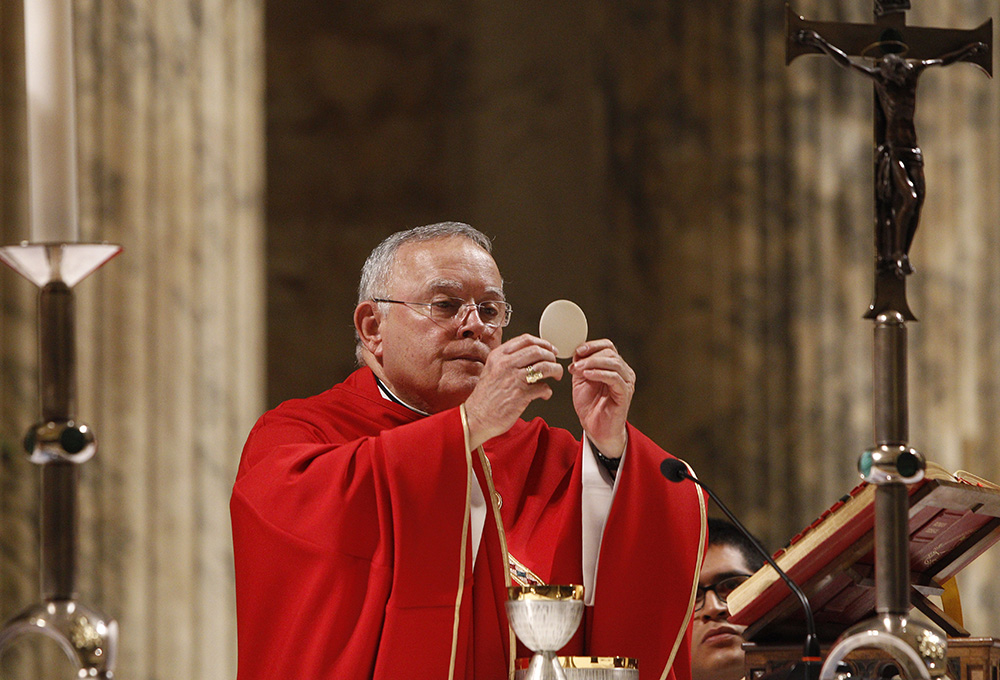 Archbishop Charles Chaput elevates the Eucharist as U.S. bishops from New Jersey and Pennsylvania concelebrate Mass at the Basilica of St. Paul Outside the Walls in Rome Nov. 27, 2019. (CNS/Robert Duncan)

His Excellency, the Most Reverend Charles Chaput, emeritus archbishop of Philadelphia, has come out of retirement to explain to the rest of his benighted brothers in the episcopacy — and to the rest of us — that an impending scandal looms for the Holy, Roman, Catholic and Apostolic Faith: President-elect Joe Biden might be given Communion. The horror!

Chaput set forth his reasonings, such as they are, in an article at First Things, the magazine of record for culture warrior conservative Catholicism. He begins by recalling the 2004 election when another Catholic, Sen. John Kerry, ran for president and some bishops, egged on by Judy Brown of the American Life League, argued that Kerry should be denied Communion because of his support for liberal abortion laws. Then-Archbishop Raymond Burke was the acknowledged leader of the effort to deny Communion to pro-choice politicians, with Chaput adopting a slightly less extreme posture.

Chaput mentions two bishops in his first paragraph, former Cardinal Theodore McCarrick and then-Bishop of Pittsburgh, now-Cardinal Donald Wuerl. I am not sure if he mentions the two together because he wants to slime the latter by associating him with the disgrace of the former. It is true that Wuerl was one of the principal voices opposed to Chaput in 2004, but there were others. After all, the conference as a body did not adopt the position Chaput advocated.

These conjectures are not idle because Chaput goes on to state:

At the time, fortunately, the Congregation for the Doctrine of the Faith resolved any confusion about correct practice in these matters with its July 2004 memorandum to then-Cardinal McCarrick, Worthiness to Receive Holy Communion: General Principles.

If you follow the link, you will note that it does not bring you to the Vatican website. The "memorandum" is a letter that was sent from the prefect of the Congregation for the Doctrine of the Faith, Cardinal Joseph Ratzinger, to McCarrick, at the latter's request. It was not an official document of the Vatican and is not posted on the Vatican's website. The text was never intended to "resolve" the matter. It does not "remain in effect," as Chaput asserts. It consists of the talking points compiled for Ratzinger by the doctrinal congregation staff for discussing the issue when it came up during the ad limina visits. It was not intended to foreclose the discussion by the U.S. bishops.

I do not mean to suggest that Chaput is lying about the origin and significance of this document. Perhaps he did not know, and has not found out since. But I was not even a journalist back in 2004, and I was able to find out the basic outlines of the story. I have gone back to sources on both sides of the Atlantic the past few days to confirm my recollection and they confirmed it.

In fact, one of them pointed out that the discussion in 2004 led the U.S. bishops to issue the document "Catholics in Political Life." You will find that document on an official ecclesial website at the U.S. Conference of Catholic Bishops, here. I know Chaput knows about that document because he was part of the three-person committee that drafted it. It stated in relevant part:

The question has been raised as to whether the denial of Holy Communion to some Catholics in political life is necessary because of their public support for abortion on demand. Given the wide range of circumstances involved in arriving at a prudential judgment on a matter of this seriousness, we recognize that such decisions rest with the individual bishop in accord with the established canonical and pastoral principles. Bishops can legitimately make different judgments on the most prudent course of pastoral action. Nevertheless, we all share an unequivocal commitment to protect human life and dignity and to preach the Gospel in difficult times.

Put simply, the U.S. bishops, having reflected on the issue, did not decide to weaponize the Eucharist for political ends. The document they adopted, which was also sent to Ratzinger, is the text that "remains in effect," as Chaput well knows.

It is fashionable among some conservatives to cite decisions and statements by Pope Benedict XVI to impugn Pope Francis. In this instance, I would point out that if Ratzinger wanted the bishops to deny Communion to pro-choice politicians, and thought it was a possible source of scandal if they did not, why then did that same Ratzinger, now Benedict XVI, choose Wuerl, not Burke or Chaput, to go to Washington two years later?

Benedict also made Wuerl a cardinal. Chaput, on the other hand, is the first archbishop of Philadelphia not to get the red hat since Pope Benedict XV bestowed the galero on Dennis Dougherty in 1921.

The limits of Chaput's evangelical imagination are on full display here:

I believed then, and believe now, that publicly denying Communion to public officials is not always wise or the best pastoral course. Doing so in a loud and forceful manner may cause more harm than good by inviting the official to bask in the media glow of victimhood. What I opposed in 2004, however, was any seeming indifference to the issue, any hint in a national bishops' statement or policy that would give bishops permission to turn their heads away from the gravity of a very serious issue.

Setting aside his presumptuous remark about "basking in the media glow of victimhood," which sounds like projection coming from a man who has built his entire media personality by whining about the decline of Western culture, is it really that hard to believe a bishop — and the bishops' conference — is quite capable of articulating clearly what the church teaches on issues of public significance without turning the altar rail into a battlefield? 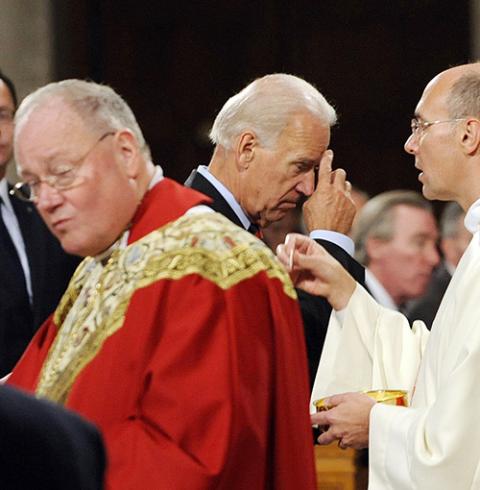 Then-Vice President Joe Biden makes the sign of the cross after receiving Communion during a Mass in 2011 at the Basilica of the National Shrine of the Immaculate Conception in Washington. (CNS/Leslie E. Kossoff)

To say that Chaput's cultural blindness is acute is perhaps too generous. How else to explain these sentences: "Public figures who identify as 'Catholic' give scandal to the faithful when receiving Communion by creating the impression that the moral laws of the church are optional. And bishops give similar scandal by not speaking up publicly about the issue and danger of sacrilege."

He goes on: "Those bishops who publicly indicate in advance that they will undertake their own dialogue with President-elect Joseph Biden and allow him Communion effectively undermine the work of the task force established at the November bishops' conference meeting to deal precisely with this and related issues. This gives scandal to their brother bishops and priests, and to the many Catholics who struggle to stay faithful to Church teaching."

Maybe half the church is scandalized by this, but the other half has been scandalized by the failure of the bishops to confront the many, many moral failings of the Trump administration with the kind of forceful language they routinely use against Democrats. And we all should be scandalized by an episcopal conference that has let itself become so divided that their boss, Pope Francis, had to tell them to take some time away from their meetings and go pray together.

Indeed, the U.S. bishops have defended human life from conception to natural death so vigorously, and having received significant support from much of the Catholic community, is it not incumbent on them to put more energy into the rest of the church's social teaching? Many Catholics appear to be unacquainted with much of that teaching, but they all know what the church teaches on abortion. How, then, does the public difference of a politician cause anyone to think otherwise? How does it cause scandal?

Chaput insists that "this is not a 'political' matter, and those who would describe it as such are either ignorant or willfully confusing the issue."

That is just ludicrous. Isn't it odd that this issue of abortion (and Chaput includes same-sex marriage at one point) is the only one that provokes this conversation? Why not the refusal to fight climate change, which threatens human life even more comprehensively than abortion? Were any Republicans threatened with denial of Communion because they supported and facilitated the Iraq War, which led to the death of hundreds of thousands of innocent people?

What is more, Chaput knows that as president, Biden will have no more say over the legality of abortion than the former archbishop does. It was the Supreme Court that ruled abortion was a constitutional right, and it is the Supreme Court that can overturn or confirm that ruling. If the issue is kicked back to the states, Chaput can lobby the legislators in Pennsylvania and Biden can lobby the legislators in Delaware. I suspect that there will be a push to enact liberal abortion laws at the federal level, but a Supreme Court majority willing to overturn Roe is a majority willing to rule any legislative enactment of Roe unconstitutional.

A prelate who did not rise to the ranks his friends thought his due? Check.

Sound familiar? Chaput has become an American Viganò, and, like the disgraced former nuncio, he is dividing the episcopacy even in retirement. That is the scandal here.

A version of this story appeared in the Jan 8-21, 2021 print issue under the headline: American Viganò: Archbishop Chaput divides episcopacy even in retirement.