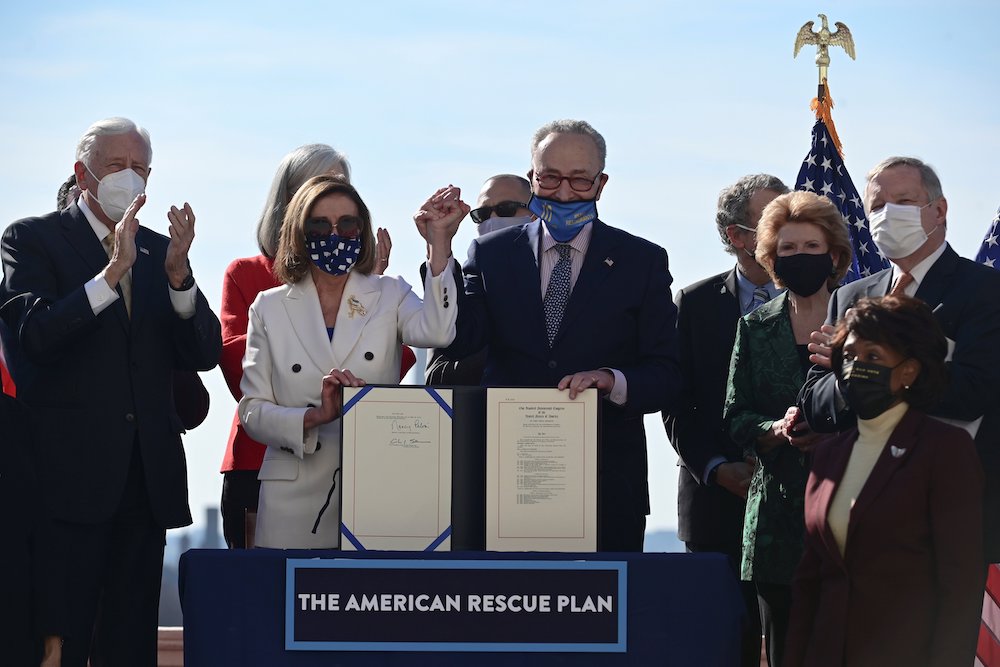 Democratic majorities in both houses of Congress passed the $1.9 billion American Rescue Plan, (ARP) and President Joe Biden signed it into law yesterday. The new law includes efforts to confront the pandemic and the economic consequences of the pandemic, but it also addresses child poverty and other long-standing issues of economic inequality. Biden promised to "build back better," and this law is a major step toward redeeming that promise.

The plan constitutes a decisive repudiation of trickle-down economics in favor of a bottom-up approach to economic stimulus that is far more consistent with Catholic social teaching.

"This legislation is about giving the backbone of this nation — the essential workers, the working people who built this country, the people who keep this country going — a fighting chance," the president said after the House passed the final legislation on Wednesday.

Republicans like to talk about helping the working class, but that help is always derivative. GOP policy the last 40 years has been to cut taxes on the rich and wait for the effects of their increased wealth to trickle down to the rest of us. This neo-liberal approach, with its idolization of market forces, has been denounced by every pope since Leo XIII in 1891. Pope Francis' 2013 apostolic exhortation, Evangelii Gaudium, epitomizes the church's hostility to the neo-liberal, trickle-down approach:

Some people continue to defend trickle-down theories which assume that economic growth, encouraged by a free market, will inevitably succeed in bringing about greater justice and inclusiveness in the world. This opinion, which has never been confirmed by the facts, expresses a crude and naïve trust in the goodness of those wielding economic power and in the sacralized workings of the prevailing economic system.

It is not impossible to see Biden, the kid from Scranton, using such words, but I am glad the kid from Buenos Aires beat him to it.

The differences in the tax provisions between the just-passed ARP and President Donald Trump's 2017 Tax Cuts and Jobs Act (TCJA) are stark. According to the Tax Policy Center's analysis of the new law:

Simply in terms of whose taxes are cut, the bill is in stark contrast to the 2017 Tax Cuts and Jobs Act. In 2021, low- and moderate-income households (those making $91,000 or less) would receive nearly 70 percent of the tax benefits from the [ARP]. Among families with children, those low- and middle-income households would get nearly three-quarters of the benefit. By contrast, nearly half of the TCJA's 2018 tax cuts went to households in the top 5 percent of the income distribution (who made about $308,000 that year).

They estimate that the biggest beneficiaries of Biden's proposal are those in the lowest two economic quartiles, while the benefits of the Trump tax cuts went overwhelmingly to the top quartile.

Republicans are trying to remake themselves as the party of the working class, but they are having trouble making the switch. Senators Mike Lee and Marco Rubio recently issued a joint statement regarding efforts to expand the Child Tax Credit. They note that the Child Tax Credit was included in the 2017 TCJA.

They now oppose efforts to turn the credit into an "allowance," akin to a universal basic income for children, because it would decouple the benefit from the requirement that a parent be working. "An essential part of being pro-family is being pro-work. Congress should expand the Child Tax Credit without undercutting the responsibility of parents to work to provide for their families," they state.

Where was this concern about the responsibility to work in some other provisions of the 2017 tax reform? According to testimony from Chye-Ching Huang of the Center on Budget and Policy Priorities, that law, among other regressive effects, lowered corporate tax rates by 40%, mostly helping investors and top-level executives who receive stocks as part of their compensation, and doubled the exemption for the estate tax. So, investment income and dying get lower tax rates period, but the poor need to demonstrate they work hard? 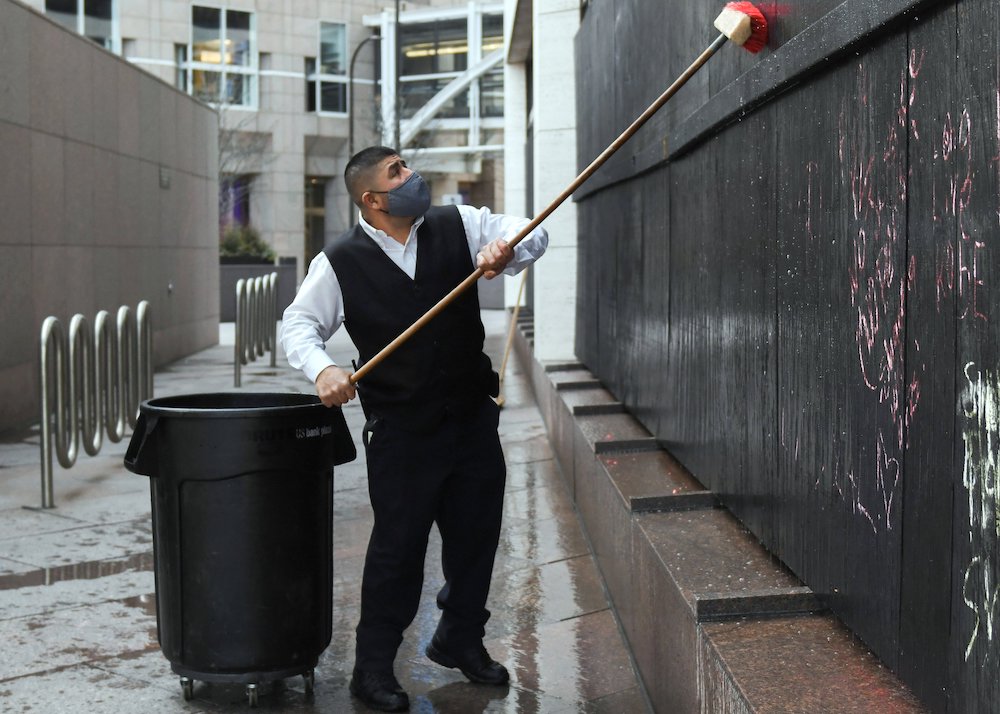 A worker in Minneapolis washes away chalked messages on US Bank Plaza March 8, 2021. (CNS/Reuters/Nicholas Pfosi)

If I were a Republican, I would be rooting for Rubio. His "common good conservatism" is ethically thin by my lights, but it is vastly superior to the cult of Trump that dominates the GOP. Rubio's pitch to the working class is not entirely rooted in resentments, to be sure. His aspirational rhetoric is something more Democrats need to learn to mimic.

That new course extends beyond economics; the pandemic has revived the need for government in ways no other event could have. As E.J. Dionne wrote this week in The Washington Post, "There is nothing magical about the renewed popularity of government action. The pandemic flattened the private sector economy and demanded a mobilization of resources only government could command. The disparate health and economic impacts of covid-19 turned inequality from an abstract question into a life-or-death proposition."

This willingness to deploy the authority of the state to address issues of justice raised by the pandemic also enjoys a prominent pedigree in Catholic social teaching. Here, St. Pope John Paul II's teaching in Centesimus Annus comes to mind and seems exactly on point as we consider the need to repair our health, education and economic infrastructures:

It is the task of the State to provide for the defence and preservation of common goods such as the natural and human environments, which cannot be safeguarded simply by market forces. Just as in the time of primitive capitalism the State had the duty of defending the basic rights of workers, so now, with the new capitalism, the State and all of society have the duty of defending those collective goods which, among others, constitute the essential framework for the legitimate pursuit of personal goals on the part of each individual.

Health, education and basic welfare are among the collective goods that the state is charged with providing when the market fails to do so. As John Paul II continued in that same paragraph:

Certainly the mechanisms of the market offer secure advantages: they help to utilize resources better; they promote the exchange of products; above all they give central place to the person's desires and preferences, which, in a contract, meet the desires and preferences of another person. Nevertheless, these mechanisms carry the risk of an "idolatry" of the market, an idolatry which ignores the existence of goods which by their nature are not and cannot be mere commodities.

I could have found countless citations from other encyclicals. The economic catastrophe occasioned by the pandemic requires government intervention, and such intervention is perfectly consistent with the teaching of the Catholic Church.

Fratelli Tutti, specifically written with the experience of the pandemic in mind, pointed toward the kinds of policies that the ARP contains, as well as the moral demand that we not revert to the unjust socio-economic structures that existed before COVID-19, but instead use this moment to rebuild a more just and humane society.

Biden and the Democrats have placed a big bet. If this stimulus package fails to stimulate the economy, if unemployment is still horrifically high next year, if children are still unable to go to schools in some cities because the poor ventilation in the school buildings make them viral incubators, if child poverty continues at its unconscionably high rate, the Democrats will pay a political price for this American Rescue Plan, and they will deserve to pay a price. And if it works, the Republicans might pay a price for having been bystanders at a time when so many of our fellow citizens are in profound pain. Whatever the political calculus, we all can hope that it works and, as Catholics, take some pride in the fact that our values and habits of ethical thought have played a role in coming to the nation's aid.