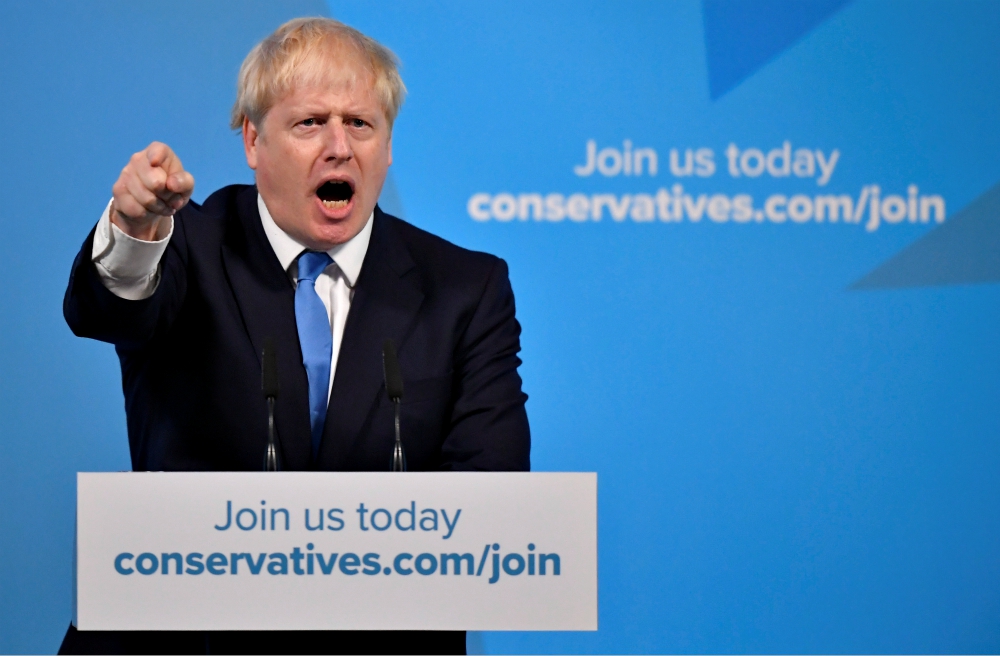 Boris Johnson speaks after being announced as Britain's next prime minister July 23 at the Queen Elizabeth II Centre in London. (CNS/Reuters/Toby Melville)

It is virtually impossible for an American to figure out what went on this week in the United Kingdom. Still less is it easy to discern what will happen next as the country struggles with Brexit, the decision passed by referendum in to 2016 leave the European Union. So far, the best commentary came through the Daily Humor site at The New Yorker in which a newscaster says into the camera, "For more expert analysis of yesterday's events in Parliament, we turn to this guy on a first date in Bushwick who recently read one and a half articles about it."

The new prime minister, Boris Johnson, is on borrowed time. Indeed, between the time I write this and the time it is published, his administration may well have crashed and burned. On Tuesday night, he lost his first vote as PM. The next day, 20 Tories broke ranks to vote against him, including Nicholas Soames, grandson of Winston Churchill. Johnson wrote a fawning biography of Churchill but seems unwilling to follow the great prime minister's commitment to European unity late in his career. Johnson only apes the chauvinism of Churchill's earlier years.

A member of Parliament told me that no prime minister had lost his first vote in the House of Commons since 1793, but I was unable to verify the claim. In the last two decades of the 18th century, the function and office, but not the title, of prime minister was in force as William Pitt the Younger bestrode British politics into the 19th century. It would not be until 1878, when Benjamin Disraeli was PM, that the title was used in an official government document. In any event, it was a long time ago that a new prime minister had such an inauspicious start. NB: The movie "The Favourite," though wonderfully acted, took great liberties with the politics and political titles of the reign of Queen Anne: Neither Sidney Godolphin nor Robert Harley would have been called "prime minister" or "leader of the opposition."

Boris, as he is universally known, has no one to blame but himself. "There's a real problem with Johnson, and it's a problem Theresa May didn't have," Keir Starmer, Labour's Brexit negotiator, said on Sky News. "People disagreed with Theresa May, but when she stood at the dispatch box and said something, she meant it and she was trusted." He added, "Johnson is not trusted. Even if he says the election will be on the 15th of October, most people in Parliament won't believe him."

Americans will be familiar with the phenomenon and the incalculable toll it takes on a democracy when the head of government is not trustworthy.

The British constitution is under stress, and the stress is also familiar to us Americans. The British got into this mess because former Prime Minister David Cameron, in a concession to Johnson and others who resented the European Union, agreed to call for a referendum if the Tories won the 2015 general election. They won, and to most everyone's surprise, 52% of voters supported leaving the EU in the referendum.

Cameron, who had campaigned hard for the country to remain in the EU, resigned the next day. May succeeded to the premiership, but she could never resolve the core conflict: A majority of her party supported Brexit but not a majority of Parliament. As well, a series of votes on various deals were clouded by personal rivalries on both the government bench and the opposition's.

Preening for the cameras, guessing which way the wind of popular opinion would blow, allowing internal party squabbles to frustrate the public's business, these are familiar to all students of the U.S. Congress in recent years. I will say that debates in the House of Commons are far more lively and informative than those in our Congress. The U.S. Senate is no longer the world's greatest deliberative body in any meaningful sense of the word.

Party politics has also hobbled good governance on both sides of the Atlantic. Neither Parliament nor Congress has an official Hastert rule — the idea that the only bills to come to a vote must enjoy the support of a majority of the ruling party — but both countries are hobbled by the unofficial rule. It has kept the British from recognizing that a no-deal Brexit would be a disaster and the government must prevent that at all costs. It kept our country from adopting comprehensive immigration reform twice, in 2006 and 2013, when a bill that had passed the Senate with 60 votes failed to come to the floor in the House.

In our country, the introduction of referendum as a means of deciding a political issue has a long history that dates back to the political reforms of the progressive era at the start of the 20th century. In California, for example, many decisions are made by referendum, including limits on taxes, physician-assisted suicide and same-sex marriage. Wisconsin also has a long history with referendums. We do not have them at the national level. The United Kingdom has only had three, two of which dealt with its relationship with Europe.

Referendums are antithetical to representative government and they should be abandoned. The fiscal consequences of Proposition 13 in California were not clear and simple when it was adopted, placing a cap on property taxes. Similarly, in 2016, voters did not foresee a no-deal Brexit, yet that is what they face now. The whole point of representative government is to apply the popular will in a thoughtful manner, with deliberation and study.

Last weekend, I watched the Weather Channel around the clock, worried for my niece in Florida. This weekend it will be BBC, worried for the future of our nation's greatest ally. And there is a similarity between the experiences: Boris Johnson and Donald Trump are a kind of political hurricane, crashing through the norms and, yes, the inertia of democratic politics. But, on both sides of the Atlantic, the costs to the country of indulging the desire for someone who will blow things up and disrupt an often-dysfunctional system are greater than what was foreseen or promised.

We are not "tired of winning" as Trump promised and Johnson cannot coerce the European Union into a sweetheart deal. Instead of leadership, these disruptors bring only chaos and hyperpolarization. I hope by Monday, the U.K. will have a new prime minister. We in the States will have to wait until next year.