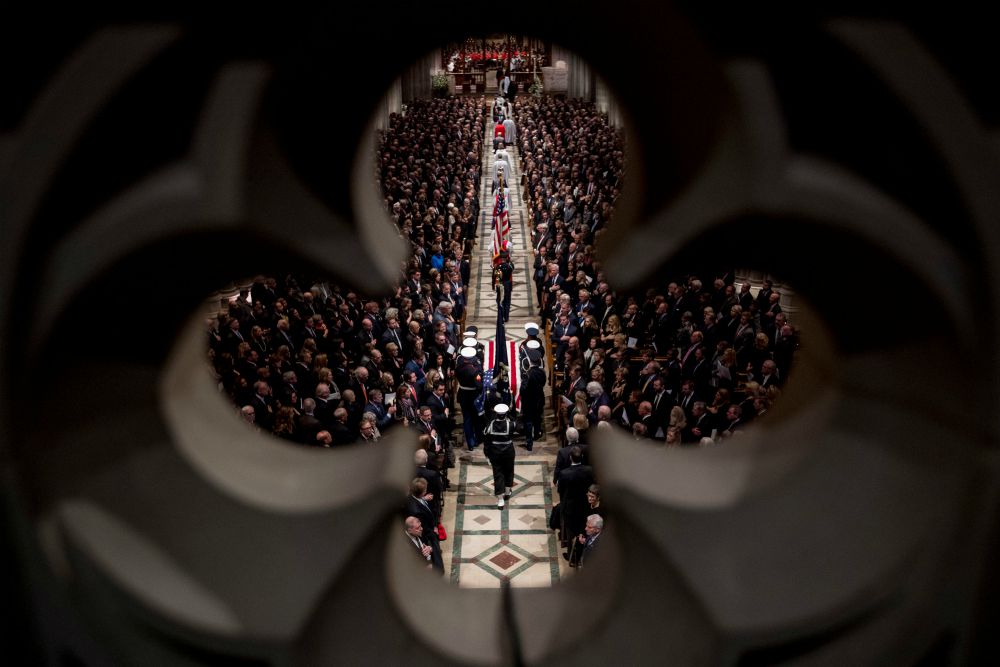 The relationship between American civil religion and the Christian faith has always landed somewhere between ambiguous and fraught. Robert Bellah's famous 1967 thesis on civil religion was one of the most comprehensively embraced sociological theories of our time, the idea that Americans impart a sacred character to some of our public myths and mores, such as the always capitalized "Founding Fathers," the reverence bestowed upon the flag, and the "City on a Hill" imagery that has retained its currency through almost 400 years. Yet the tenets of our civic faith do not line up neatly with the tenets of orthodox Christianity once you move past basic moral ideas such as doing unto others as you would have them do unto you.

As a consequence, you would think that liturgy would be a place where Christian orthodoxy and the necessarily non-denominational civil religion of the public square would clash in ways that defy resolution. Symbolic language, which moves the heart not the head, is normally the kind of thing that resists manipulation. Think of our Holy Week liturgies that include some of the most ancient texts and practices of the faith precisely because the most solemn commemorations are the most resistant to innovation. Or try serving Thanksgiving dinner with no turkey.

The funeral of President George H.W. Bush on Wednesday defied the expectation and blended the symbols of church and state in ways that did not seem to disturb. The flag-draped casket has become a staple of military funerals, and President Bush not only earned the right to military honors for his service as Commander-in-Chief, but even more for his wartime heroics as a Navy aviator. The playing of "Hail to the Chief" took place on the steps of Washington's National Cathedral, not inside, nor as part of the order of service.

The liturgy of the Episcopalian Church has developed enormously during the lifetime of the Republic. One of the key pieces of kindling in the ideological ferment preceding the American Revolution was the fear that the Church of England aimed to send a bishop to the colonies. Even the Anglicans opposed the idea. Throughout the 19th century, outside of those few churches touched by the Oxford movement, most Anglicans on either side of the Atlantic would have been surprised to go to church on Sunday and have a Communion service. I am still looking for a good history that explains how more high church instincts took root here in the United States, such that, when I was in seminary, a group of us traveled down to St. Paul's Episcopal Church on K Street in Washington's Foggy Bottom neighborhood to attend their solemn vespers with all the bells and smells you could imagine.

A presidential funeral at a high church sanctuary like St. Paul's, like the requiem Mass for President Kennedy at St. Matthew's Cathedral in 1963, would strike most Americans as profoundly strange. The Episcopal liturgy we witnessed on Wednesday was decidedly low church and not very liturgical at all and, just so, it could accommodate the civil religious themes more easily. One of the characteristics that most struck me was how non-communal the service was. It is not only that there was no Communion service. The Our Father, a prayer that all could recite together, was instead sung by a soloist and the choir. The beautiful hymn "The King of Love My Shepherd Is," a setting of the 23rd Psalm sung to the Gaelic hymn tune St. Columba, was performed as an anthem by the choir and not sung by the congregation. One of the most universally familiar hymns, especially at funerals, "O God, Our Help in Ages Past," a setting of Psalm 90 sung to the tune St. Anne, was likewise sung by the choir only. The body of the former president was brought down the nave of the cathedral at the start of the service in silence, with only the tolling of the bell, until one of the clergy recited verses of Scripture. Apart from the prayers of the faithful and the Apostles' Creed, and an opening and recessional hymn, the service had the feel of a testimonial, not a communal liturgy, with multiple eulogies and musical numbers, performed before a passive congregation. The individualism of American culture has taken some of the civis out of civil religion, some of the communion out of the Christian communion.

I was grateful, however, that the service did not become a hodgepodge of interdenominational representatives divvying up the tasks, an effort at inclusiveness that has the effect of turning the liturgy into a kind of Model United Nations at prayer: All of the parts reserved for the clergy were led by the clergy of the Episcopal Church. The Rev. Dr. Russell Levenson, the rector at St. Martin's Episcopal Church in Houston, preached a very excellent sermon. He included references to the readings, intertwined with personal remembrances of the man they had gathered to bury. Most importantly, he proclaimed the essential Christian belief in the salvific passion and resurrection of Jesus Christ.

The cathedral is filled with symbols of both the Christian faith and the nation's civil religion. A prominent statue of our first president, George Washington, who was not a Christian, stands near the entrance. The flags of all the states and territories line the gothic nave. I confess I have never liked the cathedral, in part because these displays of civil religion bother me. (I do not like seeing an American flag in the sanctuaries of our Catholic churches either.) The place was designed to be more than an Episcopal cathedral; it was planned for the kind of national services witnessed Wednesday. There may be no more deists like George Washington, even though the civil religion Bellah identified relies on the God of the deists. The God of today's Christian faithful is a God who always is interfering in human life in one way or another. Perhaps, only mainline Protestantism can still accommodate both the themes and symbols of deistic civil religion and orthodox Christianity. Perhaps, only low-church Episcopalianism can do it really well.

After the service, a longtime and dear friend posted a note on Facebook, recalling his first visit there with a mutual friend who was a devoted Episcopalian and lover of the cathedral. I recall going to the cathedral with that same friend and remarking, "This is proof that Episcopalians will not get to heaven by their good works, but by their good taste." Even the gift shop is exceedingly tasteful. The gift shop at the Franciscan Monastery across town has for sale medallions of the Sacred Heart with a battery operated red light that flashes. Kitsch, to me, is a sign of vibrant faith.

That same Episcopalian friend was also a devoted member of the Republican Party and, like the 41st president, the scion of a wealthy WASP family. It must have been while Bush was vice president that he said something awkward, as he was known to do, that implied that Episcopalians were a natural aristocracy in the United States. My friend was horrified. I can remember his words with precision: "George Bush never heard such a thing preached from an Episcopalian pulpit. We teach people that at the club."

I know that I am picky about liturgy and especially funerals: The mixing of civil religion and Christian faith that a state funeral demands makes me nervous. Still, the clergy and staff at Washington National Cathedral should be commended for what I am sure amounted to an enormous amount of planning and execution. And, whatever reservations I had about the liturgy, it was still a moment for our secular culture to recognize the degree to which, in the face of death, the Christian church has something meaningful to say, some comfort to bring, some hope to proclaim.