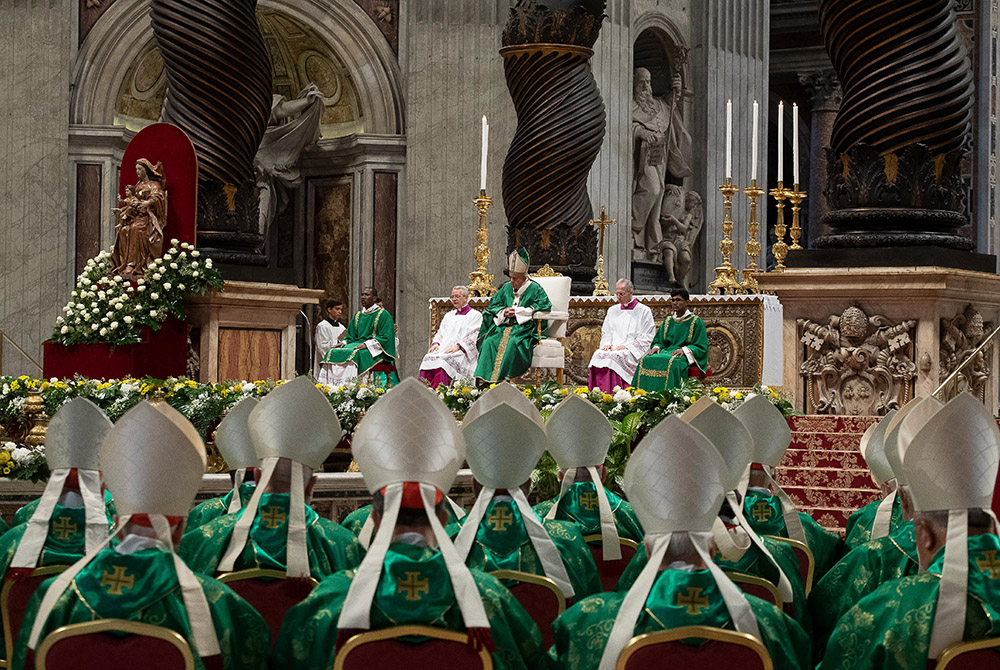 Pope Francis celebrates the opening Mass of the Synod of Bishops for the Amazon in St. Peter's Basilica Oct. 6, 2019, at the Vatican. (CNS/Vatican Media)

Pope Francis' decision to postpone and widen the planned 2022 synod is extraordinary and invites everyone to stop and take a deep breath. The planned subject — "For a synodal Church: communion, participation and mission" — remains the same but the new means adopted are now more intrinsically suited to such a topic.

The Synod of Bishops has been changing in the 21st century. Previously, under Pope John Paul II, they were stale events, with bishops reading canned speeches and amending a text that had been prepared in advance. Pope Benedict XVI introduced the innovation of allowing anyone to speak on any topic in the final hour of each day's general assembly, what I called "the karaoke hour." Pope Francis has further increased the amount of genuine dialogue at each synod and now will broaden that dialogue with a universal period of preparation at the diocesan level, followed by a continent-wide dialogue, and finally the meeting in Rome.

What is more, as Cardinal Mario Grech, secretary-general of the Synod of Bishops, made clear in announcing the new schedule, the consultation is intended to include the whole people of God. "The governing principle of this consultation of the people of God is contained in the ancient principle 'that which touches upon all must be approved by all,' " Grech said in an interview. "This is not about democracy, or populism or anything like that. Rather, it is the church that as the people of God, a people who by virtue of baptism, is an active subject in the life and mission of the church."

The churches of Latin America have been the most successful so far in developing a synodal process with the meetings of their continent-wide episcopal conference, CELAM. The meetings include a great deal of prayer, beginning with prayer together for several days before turning to business items. The documents they have produced — at Medellin, Puebla, Santo Domingo, Aparecida — have been among the most theologically fertile post-conciliar texts.

Ecclesiologist Massimo Faggioli recently wrote about synodality — albeit before the announcement from the Vatican — and about the ways it does, and does not, reflect models of sociopolitical organization in the ambient culture. "The modern theology of synodality originates chronologically in contemporary theology of the Catholic Church, and geographically within societies in the liberal-democratic order in the Western hemisphere," he wrote. "This is not just a coincidence."

In recent years, regrettably, the U.S. bishops have lost much of their ability to work together; indeed they do not seem to like each other very much, and so I worry how they will manage to engage in this new and promising synodal process.

Certainly, in the history of the U.S. church, the provincial councils and, later, plenary councils of Baltimore reflected a synodal model in the 19th century. In the 20th century, the bishops' conference sometimes channeled a similar approach, overcoming wide differences of opinion at the outset of a discussion and yet forging a consensus. For example, their 1983 pastoral letter "The Challenge of Peace: God's Promise and Our Response" was debated for more than two years, and the final vote was a nearly unanimous 238-9. In 2004, on the contentious issue of Communion for pro-choice politicians, the bishops' conference adopted a document, "Catholics in Political Life", by a vote of 183-6.

In recent years, regrettably, the U.S. bishops have lost much of their ability to work together; indeed they do not seem to like each other very much, and so I worry how they will manage to engage in this new and promising synodal process.

Consider former Philadelphia Archbishop Charles Chaput's recent tirade in First Things. He invokes "Scripture and constant Church practice" in arguing for the denial of Communion for pro-choice politicians, although his approach is practiced only in America, as my colleague Christopher White reported. And Chaput said it was "inexcusable" for San Diego Bishop Robert McElroy to argue that adopting the Chaput approach would be seen as "weaponizing the Eucharist," although that is exactly how it is being perceived.

Chaput's article came after the Vatican intervened with a letter from Cardinal Luis Ladaria, prefect of the Congregation for the Doctrine of the Faith, writing to Archbishop José Gomez, president of the bishops' conference and former auxiliary to Chaput, and reminding Gomez and the U.S episcopate that during their ad limina visits in 2019-2020, "this Congregation advised that dialogue among the bishops be undertaken to preserve the unity of the episcopal conference in the face of disagreements over this controversial topic." That is to say, ecclesiological unity cannot be sacrificed to a desire for a more strident moral and political stance. At least in the Vatican, the reduction of religion to ethics, and thence to politics, so common in the U.S., has not taken hold. Thanks be to God!

An even more egregious lack of the kind of solidarity needed if synodality is to work was demonstrated Monday by Bishop Joseph Strickland of Tyler, Texas. After LaCrosse, Wisconsin, Bishop William Callahan asked Fr. James Altman to resign as pastor of St. James the Less Catholic Church for a variety of good reasons, Strickland tweeted out a note of support for the priest!

It is one thing to disagree with a brother bishop about an issue of public policy, but to question his exercise of discipline over his own clergy, especially when that authority has been so patiently exercised? This is unheard of and it is does not invite hope that all the bishops in the U.S. are prepared to embrace a synodal path.

There are difficulties among some more liberal Catholics with synodality. In a parenthetical in the article referenced above, Faggioli wrote: "(This is one of the reasons the purely sociological measures used to understand the Church remain fundamentally Protestant and Anglo-American and there for inadequate to comprehend global Catholicism.)" And as Pope Francis has warned, synodality is not parliamentarianism. We shall consider those issues another time.

What matters now is that the pope has invited the universal church to consider a different way of organizing itself and meeting its challenges. The model of papal monarchy that has been so pronounced in the past two centuries has served the universal church exceedingly well, but the times in which we live, and the sociocultural realities in which the church must evangelize, demand a new approach. Pope Francis is pointing the way.

It is obligatory that all Catholics follow his lead, as best they can and in good faith. And if some bishops — and some of the laity! — just can't stand the sight of each other, and wonder how they can begin to build that affective collegiality so necessary to making synodality work, we need only re-read the opening of the second reading for Pentecost Sunday, taken from St. Paul's First Letter to the Corinthians:

Brothers and sisters:
No one can say, "Jesus is Lord," except by the Holy Spirit.

Let all who say "Jesus is Lord" step up; the Spirit is at work in them already.