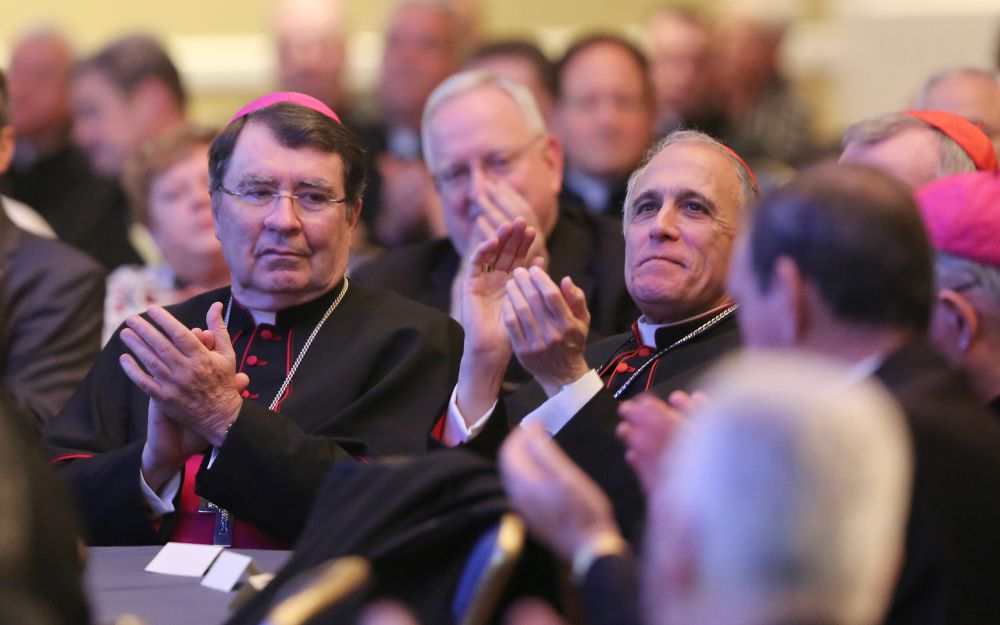 As the bishops of the United States celebrate the 100th anniversary of their episcopal conference, they received not one but two messages from Rome. As usual, the nuncio, Archbishop Christophe Pierre, addressed the body of bishops. In addition, Cardinal Pietro Parolin, the Vatican Secretary of State, preached at a special Mass Sunday night marking the anniversary.

After recalling the founding of the bishops' conference during the upheaval of the First World War, and their help in resettling refugees from the war, Parolin said, "In the very changed circumstances of today, that mission remains timely, as the church in your country seeks to bring not only material assistance but the spiritual balm of healing, comfort and hope to new waves of migrants and refugees who come knocking on America's doors." It was the first public policy issue mentioned by the cardinal.

Parolin's suave Italian accent did not diminish the force of his comments about spiritual worldliness, comments that echoed Pope Francis' often trenchant remarks about clericalism. Reflecting on the Gospel passage about the wise and unwise virgins, the cardinal said, "The oil with which the Lord asks us to fill our lamps is, above all, purity, the purity of heart that is the fruit of authentic personal conversion. Like the olives that must be crushed to yield that oil, all those things in our lives that stand in the way of our growth in Christ — our egos, our spiritual worldliness, our daily temptation and our desire for human respect — must be crushed by the daily experience of prayer, humility, self-denial and pastoral charity."

The cardinal called for "profound consensus" among the bishops and warned against any "partisan spirit." For a conference that has, in recent years, seemed to resemble an arm of the Republican Party, the cardinal's instructions could not have been exactly comforting. He commended the bishops for defending "access to affordable health care" and for their "outstanding witness … defending the right to life of the unborn." He did not mention the Affordable Care Act's contraception mandate. The words "religious liberty" did not pass his lips.

The nuncio, in his address Monday morning, quoted the pope liberally, beginning with comments Francis made earlier this year in Colombia when he met with the leadership of the Latin American bishops' conference:

The essential things in life and in the church are never written in stone, but remain a living legacy. It is all too easy to turn them into memories and anniversaries to be celebrated: 50 years since Medellín, 20 since Ecclesia in America, 10 since Aparecida! Something more is required: By cherishing the richness of this patrimony ("pater/munus") and allowing it to flourish, we exercise the munus of our episcopal paternity towards the church in our continent.

No local church is as bureaucratic as the U.S. church, and while bureaucracy deserves a better reputation than it has, the U.S. bishops' conference in recent years has not communicated the sense that the church is on the move the way Francis does regularly.

The nuncio commended the bishops for their support for the right-to-life of the unborn, and also their defense of migrants and refugees. Citing the white nationalist riot in Charlottesville, Virginia, Archbishop Pierre thanked the bishops for their witness: "[Y]our strong leadership sends a message to a young people of a church that is prophetic and filled with good-hearted people of every race and tribe!" He spoke about the need to be passionate in reaching out to young people, about evangelization and about the person of Jesus Christ.

Again, the words "religious liberty" did not pass Pierre's lips.

Cardinal Daniel DiNardo then gave his first presidential address. It was frankly better than I had expected, following the priorities of the pope, and not the conference's own priorities, adopted at last year's meeting. For example, he, too, did not mention religious liberty, although that topic was one of five priorities adopted last year. He did mention conscience protections later in the speech, but only in the specific context of health care workers not being forced to participate in the taking of human life.

Understandably, while he focused his address on the anniversary celebration, DiNardo spoke about the "forces of division" and how the church can combat such divisiveness. "The forces of division prey upon our fear of the unfamiliar, the different. But fear is not of God. God does not divide; God unites. And God, who is love, created us to love."

Addressing issues, DiNardo began by speaking about the right-to-life but then went on to speak, and speak passionately, about the cause of migrants, quoting Francis about the Dreamers: "Keep on dreaming!" DiNardo went on to address racism, earning a round of applause when he said, "Racism has no place in the Christian heart." He spoke about the devastation wrought by natural disasters and the solidarity those disasters have evoked, and commended Sr. Donna Markham and Catholic Charities USA for the organization's work assisting the people affected by the storms and flooding his own diocese experienced.

It is too soon to claim the bishops are setting off in a new direction, one that embraces the priorities of Pope Francis, not those of Carl Anderson, Raymond Arroyo and other champions of a culture-war version of Catholicism. Unlike the first presidential address of Archbishop Joseph Kurtz* three years ago, which failed to even mention immigration, DiNardo's talk did not sound discordant from the talks by Parolin and Pierre. Maybe the U.S. bishops are coming to realize: Pope Francis is the best thing to happen to Catholicism in a long, long time, and they need to jump on board his agenda. Maybe they are recognizing that the people in the pews love this pope, no matter what some of the professional commentators say about him causing scandal. Maybe, just maybe, the page is turning.

* An earlier version of this story identified Archbishop Joseph Kurtz by his middle, not first, name.