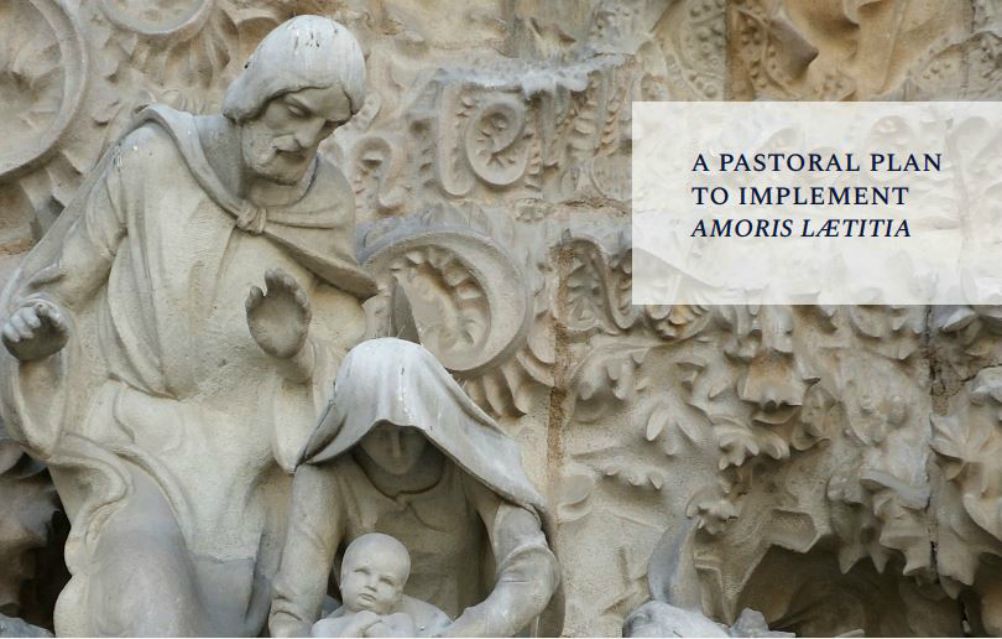 Clip from cover art of Cardinal Donald Wuerl's new pastoral plan, "Sharing in the Joy and Love of Marriage and Family," released March 3

This weekend, Washington's Cardinal Donald Wuerl issued a pastoral plan on the implementation of Amoris Laetitia. This text makes an important step towards moving the church beyond the controversies generated by the document, controversies largely confined to the pages of the Catholic press, and focuses on what Amoris Laetitia is really about, revitalizing the church's ministry to families, married couples, those preparing for marriage, and those whose marital situation has led them to feel like they no longer belong within the fold.

Recently, there has been a great deal of debate about whether or not Amoris Laetitia constitutes a paradigm shift, and whether such a shift is even possible for a church that believes its doctrines are revealed by God. I wrote about that controversy here, and my colleague at The Tablet, editor Brendan Walsh, addressed the issue in this interview with Cardinal Blase Cupich, which includes a video of the cardinal's lecture at the Von Hügel Institute on this subject.

I would submit that Cardinal Wuerl's pastoral plan essentially puts that debate to rest: On virtually every page of the plan, we see that the shift is not in what the church teaches about marriage and family life. The shift is in how the church ministers to the people of God. The word that dominates this pastoral plan is accompaniment. In different sections, we read:

In Amoris Laetitia, the Holy Father gives priority to the practice of pastoral accompaniment, which in its most fundamental aspect involves leading others closer to God. We begin each encounter mindful of everyone's innate human dignity. Pope Francis writes: "The Church will have to initiate everyone — priests, religious and laity — into this 'art of accompaniment' which teaches us to remove our sandals before the sacred ground of the other (cf. Exodus 3:5)."

Early in his pontificate, Pope Francis shared a helpful image of a pastor who accompanies. To a group of priests gathered in Assisi, Pope Francis asked, "What could be more beautiful for us than walking with our people?… sometimes in front, sometimes behind and sometimes in the middle." He further explains, "in front in order to guide the community, in the middle in order to encourage and support; and at the back in order to keep it united and so that no one lags too, too far behind, to keep them united" (Address, October 4, 2013).

If there is a breakdown that leads to separation or even divorce, that loving accompaniment by the Church needs to continue, said the Holy Father. "It is important that the divorced who have entered a new union should be made to feel part of the Church," he added, and pastoral care to their children needs to be "the primary concern" (AL, 243-45).

The ministry of accompaniment is a collaborative effort of priests and laity who understand themselves to be missionary disciples, who experience the love of the Lord in their encounter with him and who seek to share it with others.

The cardinal has sections on "accompanying the hurting," "accompanying the anonymous" and an especially interesting section on "accompanying the distracted." All three, but especially this last, reveal a frank but not fretful assessment of the challenges modern families face, a sense of realism about what is possible, especially at first, but also a great confidence in the fact that God's grace is already active in the lives of people and, to repeat a theme of Amoris Laetitia, that God's revelation continues especially in family life. It is, as it is in the Scriptures, a privileged place for God's self-revelation.

This is the paradigm shift. It is not enough for a minister of the Gospel to repeat what the Church teaches and hope that is enough to make marriages more solid, still less bring comfort to the divorced and remarried. We cannot, as some guidelines issued by other bishops, such as those from Archbishop Charles Chaput, skip over the process of accompaniment and discernment and simply repeat the certainty that the divorced and remarried, all of them, without exception and no matter their circumstances, can never be brought to the Eucharistic table. Indeed, the tone of this pastoral plan could not be more different from the Philadelphia guidelines which read as if Amoris Laetitia had never been issued.

The tone of Wuerl's text is captured best in these observations in the chapter on accompaniment:

Some people have focused much of the attention of Amoris Laetitia on people in so-called "irregular situations" as divorce and remarriage. A honest spiritual assessment of marital and family life recognizes that it could be said that each one of us is in an "irregular situation" when it comes to our relationship with true God.

Compare that simple, orthodox observation with the tone of those who seem to revel in referring to "objectively sinful" situations and "manifestly adulterous couples" as we hear on EWTN.

Indeed, one of the strengths of this pastoral plan, and one that should be of special assistance to even the fiercest skeptic, is that Wuerl begins by reminding us about the beautiful teaching about marriage contained in Amoris Laetitia's other eight chapters. Too much of the discussion has focused only on Chapter 8 and those in irregular situations. Wuerl quotes frequently from Pope Francis' beautiful, rich theological vision. For example, he quotes from one of my favorite passages, Paragraph 29: "The word of God tells us that the family is entrusted to a man, a woman, and their children, so that they may become a communion of persons in the image of the union of the Father, the Son, and the Holy Spirit. Begetting and raising children, for its part, mirrors God's creative work. The family is called to join in daily prayer, to read the word of God and to share in Eucharistic communion, and thus to grow in love and become ever more fully a temple in which the Spirit dwells." The combination of ethereal calling with practical application — daily prayer, reading the Word of God and going to Communion together — is a hallmark of Pope Francis' teaching style. Throughout the pastoral plan, the cardinal cites beautiful and challenging passages from Amoris Laetitia, reminding us not to rely on what the pundits have to say about it, but to return to the source itself.

Most importantly, I think Wuerl's plan will help priests and lay people engaged in ministry to families to get past the fireworks of the debates and focus on the people in the pews. That, after all, is what the synods and Francis' exhortation were all about. The section on parish life includes, among other items, what the cardinal has been hearing from his own priests, suggestions about how to accompany families, practical ideas. And there is another sidebar with practical ideas about working with youth, and one on welcoming and helping engaged couples, accompanying young couples, etc., all with ideas that the cardinal has picked up from his pastors and his own experiences.

This is the heart of the paradigm shift. The Holy Father and the bishops gathered for the synods in 2014 and 2015 did not set out to provide fodder for the grumps at First Things. In this pastoral plan, we see how Amoris Laetitia is really playing out, how it will galvanize our ministry and — God willing — strengthen families as they face new and challenging times. Only those who detest the pope for other reasons, and wish to remain obstinate, can fail to see how Wuerl's pastoral plan demonstrates there is no threat to Catholic doctrine.

I am not one to shy away from controversy, but I confess I am getting tired of playing rhetorical whack-a-mole with the anti-Amoris brigade. I finished reading this plan, and I asked myself if it would really help those whose complaints about Amoris Laetitia have been so relentless. For many, I think the answer is yes, it will. For others, a different image came to mind, of the character Sir Leigh Teabing in "The Da Vinci Code," played brilliantly by Ian McKellen, after he is arrested and taken away in the police car, his face against the window, screaming and ranting incoherently. In the background is Westminster Abbey, solid and beautiful, just as the church's teaching is solid and beautiful.

It is time for the ranting to stop. Cardinal Wuerl has pointed the way forward for the church in the United States: Let's get out and accompany the people of God and their families, trusting that both pastor and pastured will come to a deeper understanding of our shared faith in the process, discovering that the family is still a privileged place for God's self-revelation, and that it is up to him, not us, if he wants to tell us something new.