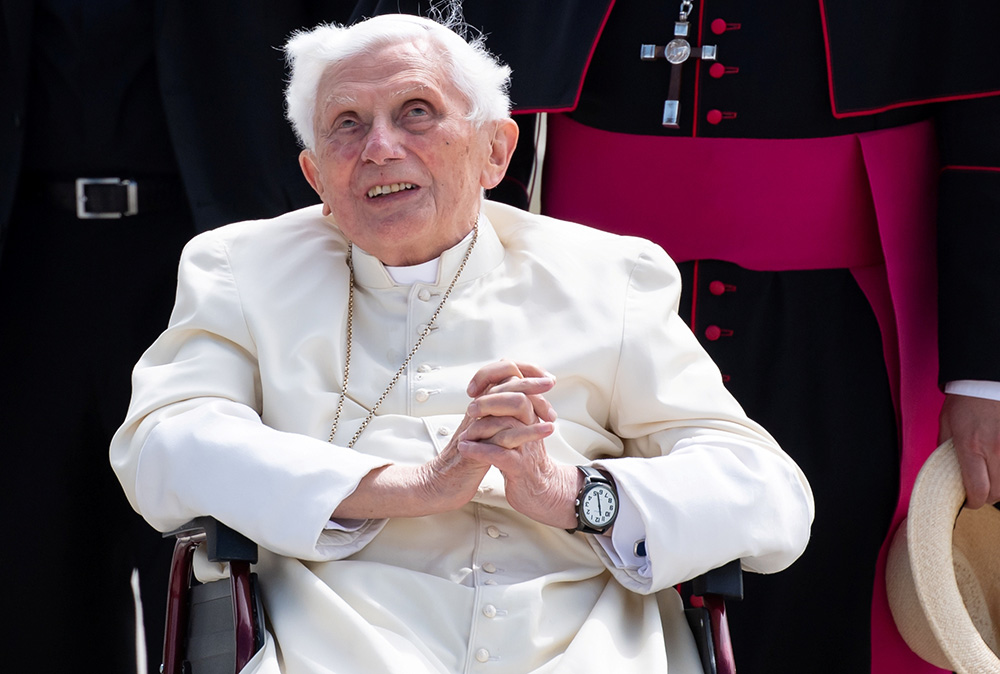 Happy birthday, Pope Emeritus Benedict XVI! The former pontiff is now the first person to ever have been pope who has reached the age of 94. I had a neighbor once who always drove Volkswagens, and was fond of saying, "German engineering. It's built to last." Indeed. Pope Leo XIII was 93 when he died in 1903, and he was still pope. As we all know, Benedict resigned in 2013, saying he was no longer physically able to do the job.

It is that resignation that will dominate his legacy, but today I would like to consider two other aspects of his long life: his career as a theologian and why being a great theologian is no guarantee one will be a great pope.

Joseph Ratzinger's early book Introduction to Christianity, first published in 1968, still lives up to its title as a fine introduction to our faith, explaining in great deal and with profound insights each of the articles of the Apostles' Creed. When I was a teenager dissatisfied with the offerings in CCD class, my pastor gave me his copy of Hans Küng's On Being a Christian, the reading of which I credit with keeping me in the church as a teenager. As I have grown, while still finding parts of that book wonderful, I incline more to the Ratzingerian approach and style. 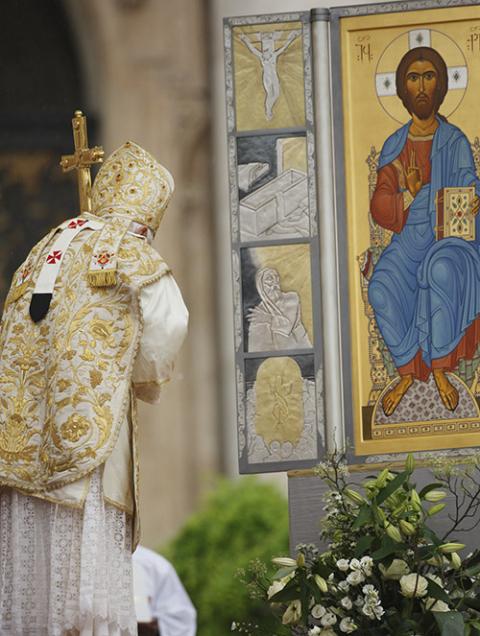 In Introduction to Christianity, in discussing the sentence "I believe in Jesus Christ, His only son, our Lord," Ratzinger writes:

After all that has gone before we shall dare to say first: Christian faith believes in Jesus of Nazareth as the exemplary man (this is probably the best way to translate accurately the above-mentioned Pauline concept of the "last Adam"). But precisely because he is the exemplary, the authoritative man, he oversteps the bounds of humanity; only thus and only thereby is he the truly exemplary man. For man is the more himself the more he is with "the other". He only comes to himself by moving away from himself. ...

If Jesus is the exemplary man, in whom the true figure of man, God's intention for him, comes fully to light, then he cannot be destined to be merely an absolute exception, a curiosity, in which God demonstrates to us what sorts of things are possible. ... The New Testament makes this perceptible by calling him an "Adam"; in the Bible this word expresses the unity of the whole creature "man", so that one can speak of the biblical idea of a "corporate personality". So if Jesus is called "Adam", this implies that he is intended to gather the whole creature "Adam" in himself. But this means that the reality that Paul calls, in a way that is largely incomprehensible to us today, the "body of Christ" is an intrinsic postulate of this existence, which cannot remain an exception but must "draw to itself" the whole of mankind. (cf Jn 12:32)

It is a stunning passage that demands all future theologians reconsider what they mean when they say they have a "low Christology" — or a high one. It shows the degree to which Ratzinger, early in his career, resisted seeing Christianity as a confession of certain ideas. Instead, it is a profession of faith in this man Jesus as the Christ of God. There can be no reduction of religion to ethics, although ethics are implied by our core dogmatic claims about this person Jesus, the Christ.

Later in that same book, in examining the Creed's statements about the church, we get a glimpse of the future pope's non-modern, as opposed to anti-modern, ecclesiological premises:

The saying about the communion of saints refers, first of all, to the eucharistic community, which through the Body of the Lord binds the Churches scattered all over the earth into one Church. Thus originally the word sanctorum (of the holy ones) does not refer to persons but means the holy gifts, the holy thing, granted to the Church in her eucharistic feast by God as the real bond of unity. Thus the Church is not defined as a matter of offices and organization but on the basis of her worship of God: as a community at one table around the risen Christ, who gathers and unites them everywhere.

You can see why this passage would be off-putting to those who incline to the warm and the fuzzy, but there is an acute humility at the heart of Ratzinger's understanding of the church as a community that is formed not by us but by God. I admire it and, in a way, it characterized his understanding of the church as his career changed abruptly from the lecture hall to the cathedral in Munich to the corner office at the Congregation for the Doctrine of the Faith and finally to the papacy.

During his time as pope, Benedict XVI wrote a beautiful trilogy on Jesus of Nazareth. It was far more accessible than his earlier work, and reflects his time as a pastor, not just as a doctrinal watchdog. A reader could argue with this point or that but none could deny the books were the work of a man of deep and abiding faith, and eager to share that faith with his readers. One passage in the first volume stood out to me at the time and still does, for its ability to capture that deep faith:

Now, it is true that this leads us to the great question that will be with us throughout this entire book: What did Jesus actually bring, if not world peace, universal prosperity, and a better world? What has he brought?

The answer is very simple: God. He has brought God. He has brought the God who formerly unveiled his countenance gradually, first to Abraham, then to Moses and the Prophets, and then in the Wisdom Literature — the God who revealed his face only in Israel, even though he was also honored among the pagans in various shadowy guises. It is this God, the God of Abraham, Isaac, and Jacob, the true God, whom he has brought to the nations of the earth.

He has brought God, and now we know his face, now we can call upon him. Now we know the path that we human beings have to take in this world. Jesus has brought God and with God the truth about our origin and destiny: faith, hope, and love. It is only because of our hardness of heart that we think this is too little.

I know how often I allow my hardness of heart to cause me to think that it is too little. And during such times, I crack open the book and turn to that passage. We human beings, and especially we Americans, have become accustomed to self-reliance, and we do not find it easy to believe that faith the size of a mustard seed can change the whole world. Any person who can write such beautiful words, whatever difficulties he has endured in his life of faith, is a person whose life is rooted deeply, very deeply, in the mystery of the Incarnation and the proclamation of the empty tomb. 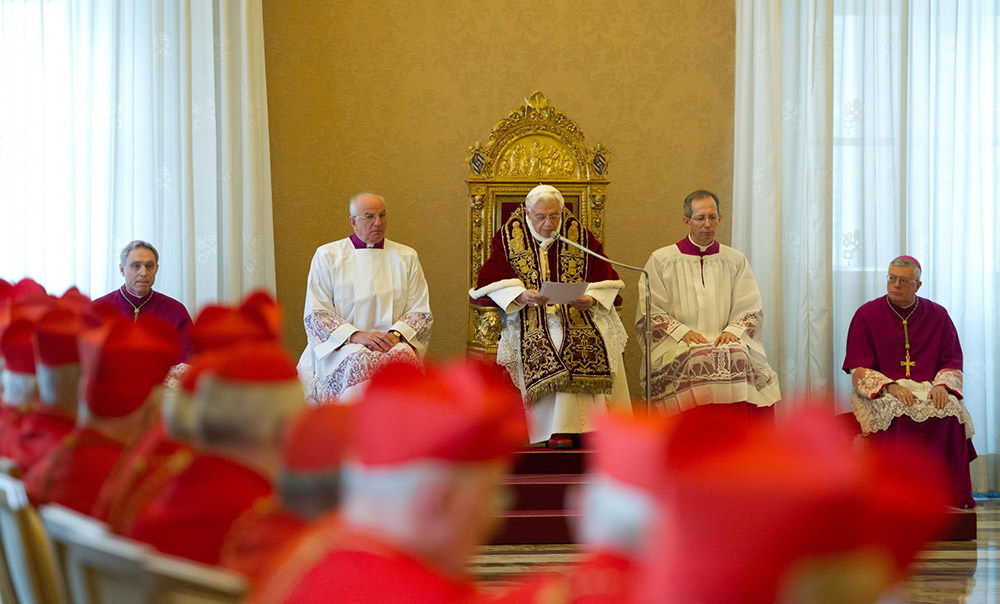 Pope Benedict XVI reads his resignation in Latin during a meeting of cardinals at the Vatican Feb. 11, 2013. (CNS/Vatican Media)

That deep faith is a sine qua non for leadership in the church but it also is not enough. We in the United States are especially entitled to complain about the papacy of Benedict XVI. Yes, his encyclicals were profound and beautiful. Yes, his sermons were exquisite. But any leader of an organization is only as good as his judgment of others' gifts and his ability to appoint the right people to the right tasks. In this, Benedict XVI's pontificate was a disaster plagued by scandals.

There was Benedict's Secretary of State Cardinal Tarcisio Bertone's apartment, the funding of which led to an investigation and indictment of two officials for redirecting funds from a children's hospital. One was found guilty and the other exonerated.

Benedict XVI appointed Cardinals Justin Rigali and Raymond Burke to the Congregation for Bishops, in 2007 and 2009 respectively. The former is a clericalist of the highest order and the latter an ideologue of the highest order. What could go wrong? If you want to find the source of the mediocrity of the U.S. hierarchy, look no further.

Yet, worse was to come. A man of Benedict's learning should have been able to discern the damage the ancient Roman method of promoveatur ut amoveatur — promote to remove, or, as we would say, kicking someone upstairs — had inflicted on the church through the centuries. Yet, in order to remove Archbishop Carlo Maria Viganò from the Roman Curia, the pope sent him to the United States as papal nuncio in 2011 where he played a large role in the appointment of bishops. We know now precisely how nasty and reactionary this man is, but surely those traits were in evidence before that disastrous appointment was made.

All was forgiven when, in a singular act of courage and foresight, Benedict XVI resigned the papacy, recognizing that modern medicine permits people to live long past the time when they have the requisite faculties to carry certain burdens, and that the tradition of dying in office needed to come to an end. On his birthday, I will forget about his being a lousy judge of character, reread some of my favorite passages from his writings, and hope he is enjoying the day. His has been a singularly fascinating life and his contributions will long outlast his deficits.