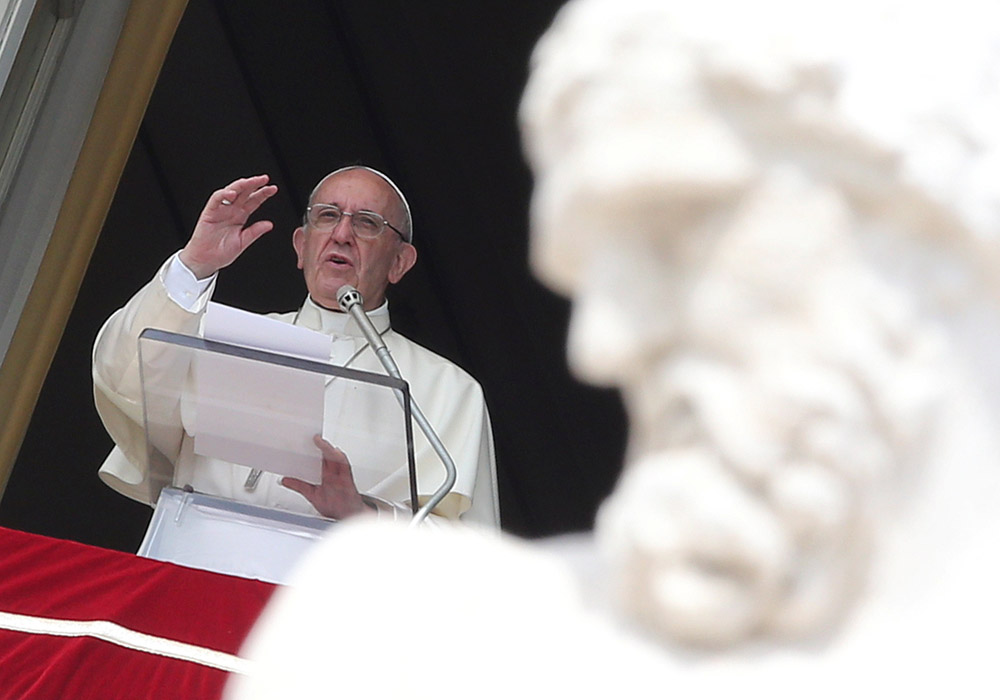 Pope Francis leads the Angelus from the window of his studio overlooking St. Peter's Square Sept. 24 at the Vatican. (CNS/Alessandro Bianchi, Reuters)

At first blush, the self-styled "filial correction" of Pope Francis, signed by a few dozen professors, former professors and clergy, did not seem to merit a response. None of the signatories were household names, the only bishop to sign the original document was Bishop Bernard Fellay, who is in schism already, and the arguments were ones we had heard before, albeit with the rhetoric ramped up to an offensive degree.

As I read the text of the statement, I immediately thought of something then-Cardinal Jorge Bergoglio had said to his brother cardinals in the meetings before the 2013 conclave, about which we have notes that Cardinal Bergoglio wrote at the request of Cardinal Jaime Ortega Alamino. "When the Church does not come out of herself to evangelize, she becomes self-referential and then gets sick. (cf. The deformed woman of the Gospel)." The Archbishop of Buenos Aires said:

"The evils that, over time, happen in ecclesial institutions have their root in self-referentiality and a kind of theological narcissism. In Revelation, Jesus says that he is at the door and knocks. Obviously, the text refers to his knocking from the outside in order to enter but I think about the times in which Jesus knocks from within so that we will let him come out. The self-referential Church keeps Jesus Christ within herself and does not let him out."

That image of Jesus knocking to get out was powerful, so powerful that his fellow cardinals responded by electing him pope.

Alas, his insight, that there is a kind of ecclesiological approach that wants Jesus kept in a box — I had almost written tomb — which causes a sickness in the church and is a fundamental distortion of the essential missionary spirit of Catholicism, that insight is lost on the drafters of the filial correction.

The "news" that something was coming had been advertised in advance by the extreme website Rorate Caeli. They gleefully announced that all the commotion had resulted in their crossing the threshold of 14,000 Twitter followers. There are larger parishes than that, I thought to myself. This is small beer.

But, then, I took a step back and realized that this latest broadside attack on Pope Francis was part of a pattern. It seems every month or so, someone comes out with a similar, staged attack on the pope, with varying degrees of subtleness. The four cardinals with their five dubia. The follow-up letter about the dubia from the late Cardinal Carlo Caffarra. The Wanderer interview with Cardinal Raymond Burke.

It is more than a little interesting that those with an affinity for the traditional Latin Mass are so prominent in the ranks of the opposition to Pope Francis. That Mass, of course, actually was traditional, but the moral theology they deploy against Amoris Laetitia betrays a more recent vintage. It is reactionary against modernity, but it is also opposed to the more holistic approach to conscience and moral decision-making that we find, for example, in the Bible, or in the old manuals of moral theology that grew out of the Counter-Reformation. Professors Todd Salzman and Michael Lawler showed the linkages between Francis and Aquinas in a powerful essay published here at a year ago.

To be clear: When Pope Francis wrote in Amoris Laetitia, at Paragraph 37, "We have been called to form consciences, not to replace them," he is articulating the traditional teaching of the church.

I cannot discern any necessary connection between affection for the Old Mass and a disposition to a particular school of moral theology. Perhaps because Latin is a dead language, it yields a certainty that a living language can never vouchsafe because the meaning of words can develop and change in a living language. Certainty about all moral judgments is what these opponents of the pope are after, provided the certainty is theirs.

It was astounding that they criticized Pope Francis not only for Amoris Laetitia but for his "unprecedented sympathy" for Martin Luther. But, recall that Archbishop Marcel Lefebvre, who became a champion of the Old Rite, was also a fierce opponent of the Vatican II document Dignitatis Humanae, specifically because of the ecumenical flavor of the text. But, surely they remember St. Pope John Paul II's participation in a Liturgy of the Word with the Lutheran community in Rome back in 1983. As British author Stephen Walford told my colleague Joshua McElwee, "The signatories also attack Pope Francis for his attitude to Martin Luther, and yet, their own judging of what is acceptable for a pope to teach is nothing short of Protestantism; it's a DIY (do-it-yourself) Catholicism."

The charge of heresy is remarkable too, and the employment of this word amounts to a charge, it calls for a trial. If this latest salvo is indeed part of an orchestrated campaign, the stakes have been raised. I have thought that Pope Francis has handled the opposition of men like Cardinal Raymond Burke perfectly: Don't make him a martyr, give him no responsibility, do not take the bait of answering the dubia. If Burke hurls the charge of heresy at the pope, it would be time to ask for the red hat back.

In addition to the frontal assaults, there are more indirect attempts to minimize the significance of what Pope Francis is trying to achieve in the church. Take the recent article by Archbishop Charles Chaput in First Things. (I do not suggest that Chaput is part of any coordinated effort with the Old Rite traditionalists who drafted the filial correction.) The archbishop praised Veritatis Splendor, the 1993 encyclical on moral theology issued by St. Pope John Paul II. That text can be interpreted in a less deterministic way than the archbishop implies, but it is a source of regret that the late pontiff's work even permitted the attack on the late Barnard Haring's theology that Chaput displays in his piece. Haring was no relativist. But, hey, we can all argue about how to interpret Vatican documents until the cows come home.

What disturbed me was a line of Chaput's at the end of the article. "In the long run, Veritatis Splendor will be remembered long after many other works of popes and politicians are forgotten," he opined. I shall stipulate about the politicians but I wonder if the archbishop had a particular work of a particular pope in mind?

The task for Pope Francis, and for those in the hierarchy and in the pews who are committed to helping him return the church to a more traditional understanding of conscience, and a less legalistic interpretation of the Christian moral life, is to keep at the work, to keep checking to make sure we listen for Jesus knocking at the door, and if he is knocking from the inside, to let him out. The Holy Father and the bishops should not dignify the attacks on Francis with a response: Leave that to us in the Catholic press and to the academy. But, no one should think there is any turning back, any lessening of focus or determination, any backing off. If these critics came in good faith with their arguments, that would be one thing. But the sheer nastiness of this filial correction demonstrates that they do not come in good faith. Let them nail their theses to some church door and see how that works out.