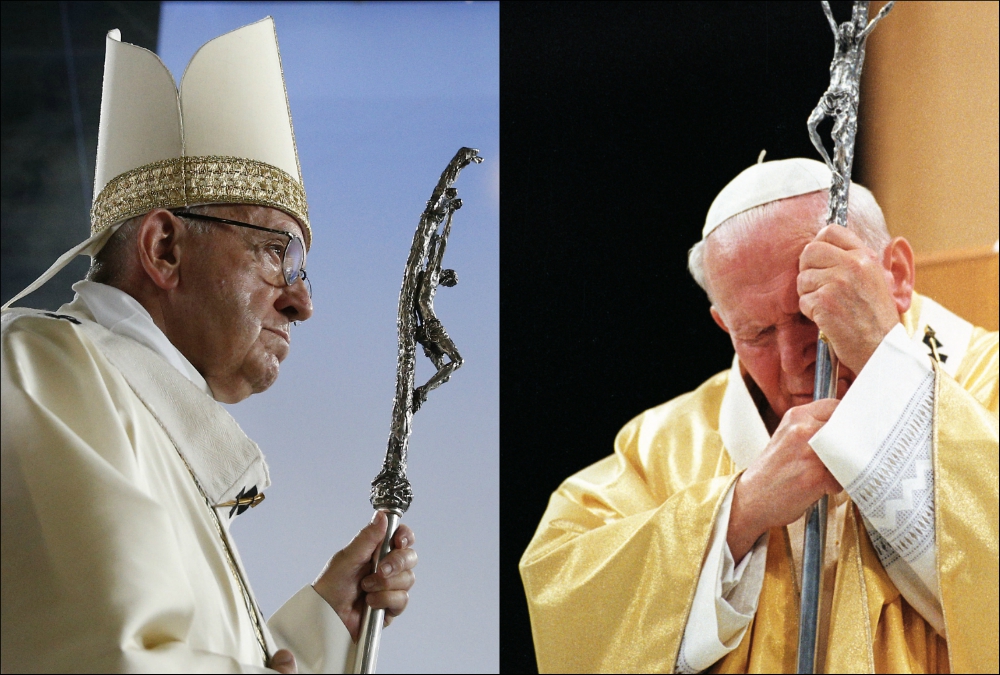 Pope Francis' decision to complete the development of doctrine regarding the death penalty begun by St. Pope John Paul II has caused quite a stir among those already opposed to this pope. But who can reasonably doubt that this development is legitimate?

The key shift in Catholic doctrine was effected by John Paul II. First, the text of the catechism approved in 1992 shifted away from a focus on just punishment and, instead, permitted the death penalty only in those circumstances in which there was no other way to protect society from further violence. "Assuming that the guilty party's identity and responsibility have been fully determined, the traditional teaching of the Church does not exclude recourse to the death penalty, if this is the only possible way of effectively defending human lives against the unjust aggressor," the catechism stated.

In his 1995 encyclical Evangelium Vitae, the pontiff repeated the shift and concluded that the death penalty was unnecessary as a practical matter. He wrote: "[Punishment] ought not go to the extreme of executing the offender except in cases of absolute necessity: in other words, when it would not be possible otherwise to defend society. Today however, as a result of steady improvements in the organization of the penal system, such cases are very rare, if not practically non-existent."

And, again, when the pope came to St. Louis in 1999, he told the faithful at Mass: "A sign of hope is the increasing recognition that the dignity of human life must never be taken away, even in the case of someone who has done great evil. Modern society has the means of protecting itself, without definitively denying criminals the chance to reform. I renew the appeal I made most recently at Christmas for a consensus to end the death penalty, which is both cruel and unnecessary."

Instead of relying on the traditional teaching that some crimes warranted the punishment of death, a teaching that was explicitly acknowledged in the Bible, John Paul II built on the teaching of previous popes and especially the Second Vatican Council, and saw the inviolable dignity of the human person as the cornerstone of Catholic social teaching, not the legitimate authority of the state in exercising the divine mandate to enforce justice. That was the key shift in doctrine.

The only change Pope Francis affected last week was to say that the limited exception John Paul II allowed, namely protecting society from further violence by a person whose guilt has been determined beyond doubt, no longer exists; that we Catholics must now work to abolish the death penalty as an affront to human dignity; and that its application by the state is deemed morally "inadmissible."

In an amazing scheduling coincidence, on Aug. 2, the same day Francis announced the change in the catechism, Chicago Cardinal Blase Cupich spoke at the American Bar Association on the subject of the death penalty. The cardinal acknowledged that death penalty supporters conceive that it confers a kind of justice, but that a Christian understanding of the sanctity and dignity of human life cannot concur. Cupich said:

At a profound human level, we tend to believe that by executing a murderer, we are somehow helping rebalance the scales of justice. But there is a flaw in that way of thinking, for the real tragedy of murder is that there is no way to rebalance the scales of justice, no way to bring life back to those who have been killed or to restore them to their grieving families. When the state imposes the death penalty, it proclaims that taking one human life counterbalances the taking of another life. This is profoundly mistaken. If there is any lesson we need to learn in this perilous age, it is that taking a human life in the name of retribution does not bring justice or even closure, even if it may feel that way in the moment. Rather, capital punishment only continues the cycle of violence and vengeance. The tragic truth is that nothing can restore a human life.

Cupich also identified another reason Catholics must oppose the death penalty: The problem with the death penalty is not only what it does to the person executed, it is what it does to us, how it coarsens our moral calculi. "A state that rejects in principle the execution of even those individuals whose crimes are unspeakable bears powerful witness to the unconditional nature of the right to life," he said. "It asserts that every member of the human community shares a dignity that is not canceled by defects of health or age or morality. A state that refuses to use the death penalty advances a culture of life with great power of witness precisely because it protects the lives of those who have been judged least worthy of its vindication."

This is so obvious, it is shocking that all Catholics, especially those who call themselves "pro-life," do not see it.

Yet, how priceless to see the website called "LifeSiteNews" launch an attack on Francis. It ran an essay arguing the pope contradicted natural law and the deposit of faith.

Raymond Arroyo, of EWTN, tweeted: "The change of the Catechism's teaching on the death penalty today has triggered a lot of anger among Catholics on social media. Coming in the midst of the sex abuse revelations, the timing is curious ... and more fury is not what the Church needs at this moment."

Someone should tell him that U.S. social media is not part of the development of doctrine.

On his program last Thursday night, Arroyo, Robert Royal of The Catholic Thing, and Fr. Gerald Murray of the New York Archdiocese, repeated ad nauseam that the pope had changed the teaching of the church and that church teaching can't change.

I have a question for Arroyo and his "papal posse": Did the church change its teaching on slavery? And, if not, do you think it is still morally acceptable to own slaves? Did the church change its teaching on religious liberty or do they still believe that "error has no rights" and that the constitutional separation of church and state can merely be tolerated? The lack of theological sophistication on Arroyo's show is almost as distressing as the commitment to Republican politics over any fidelity to Catholic teaching.

And let Catholics further hope that our witness on behalf of human dignity will extend to the most vulnerable in our midst, whether the unborn child in the womb, the refugee at our border, or the prisoner on death row. What Francis is telling us is what the Gospels tell us: We humans are all sinners, all in need of the mercy of God, but that we possess an inalienable dignity that not even a heinous crime can take away. A culture that grasps that and takes steps for its laws to conform to that vision will be a more humane and civilized society.