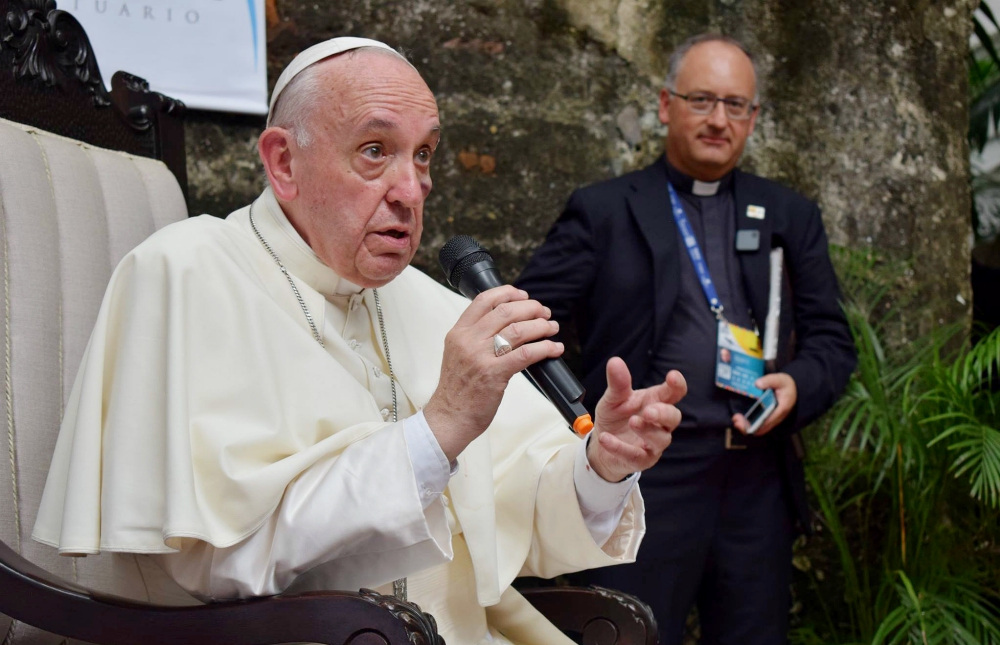 In the Rome of Pope Francis, Jesuit Fr. Antonio Spadaro, editor of La Civiltà Cattolica, is first among equals when it comes to explaining this pontificate. Not that what the pope says is confusing, as some of his critics allege. No. Rather, the Holy Father is very direct and his speeches are very accessible.

If Pope Benedict XVI's texts were dense and systemic, and therefore in need of explication, Francis' talks are direct and what is needed is someone who can provide a systemic analysis, bringing together disparate talks into a single vision. Spadaro does that.

Earlier this week, Spadaro gave a talk at the University of Notre Dame titled "The Diplomacy and Geopolitics of Mercy: The World of Pope Francis." We tend to think of mercy as a personal quality, and it is, but Spadaro sees it as a theme that also runs through the pope's vision of politics and society.

"For Francis, mercy is not an abstract concept. It is the action of God within the life of this world: in societies, in human groups, in families and individuals," he said. "God not only acts through the lives of individual people, but through the historical processes of peoples and nations. Even the most complex and intricate ones."

How does this play out? Spadaro recalls Francis going to the war-torn Central African Republic to open the Holy Door for the Jubilee Year of Mercy at the cathedral in Bangui, before opening the Holy Door at St. Peter's in Rome. He then explains:

This is why Francis made clear to the diplomatic corps, again in his talk of 2016, that the "opening of the Holy Door of Bangui Cathedral was meant as a sign of encouragement to look ahead, to set out anew and resume dialogue."

Here then is a great image of mercy: the door. The sign of the "Holy Door" has a clear political meaning for Pope Francis. This opening was made symbolically more effective through the presence of thousands and thousands of Holy Doors around the world.

What, then, does mercy as a political category mean? Summing it up in a sentence we could say: never consider anyone or anything as definitively "lost" in relations between nations, peoples and states. This is the heart of the political significance of mercy.

I confess I was looking for a footnote to that penultimate sentence, something about how this maxim that no one is "definitively lost" clearly does not apply to President Donald Trump, but that would be churlish. And far short of the radical vision to which the pope is calling us. No one, absolutely no one, is beyond the reach of God's mercy, even you know who.

After citing some recent interventions by the Holy See in the diplomatic sphere, such as working for peace in Colombia and better relations with Cuba and China, Spadaro says something that will strike many people as wrong-headed.

As these and other cases show, the pope's position consists not in saying who is right and who is wrong, for at the root of all conflict is a fight for power or regional dominance, or what the pope calls a "vain pretext." There is no need to take sides for moral reasons. The pope rejects the mixing of politics, morals and religion that leads to the use of a language that divides reality between the absolute good and the absolute evil, between an axis of evil and an axis of good, between goodies and baddies. For Francis, the history of the world is not a Hollywood film, in which "our boys" come to save us from "those people." He knows there are always different interests at stake, and that different sides act out of standpoints that are usually morally ambiguous.

You could hear the objecting shrieks of "moral relativist!" before Spadaro had sat down. I believe the point is not that morality is merely ambiguous, or that we must relativize moral truth due to political reality. It is that mercy is not our action in history, but God's action in history, and it does explode our human categories and, especially, our desire to claim that God is on our side in the various political battles in which we engage.

God acts in history differently from the way we humans act. The cross is a sign of victory because of God's action. The poverty of the manger is a scandal for the king of Israel, unless viewed from God's point of view, revealed to us in the Scriptures.

In explaining this, Spadaro got a little naughty. He has been chastised, ad nauseum, by certain conservative commentators for once tweeting "2 + 2 in #Theology can make 5."

Coming to the heartland of the United States, where most of Spadaro's critics are found, he couldn't help providing a succinct literary and theological education:

In Fyodor Dostoyevsky's Notes From Underground (published in 1864), the protagonist supports the idea of two times two making five, spending several paragraphs considering the implications of rejecting the statement "Two times two makes four." His purpose is not ideological, however. Instead, he proposes that it is the free will that makes mankind human.

Pope Benedict XVI in 2006 talking with young people said: "God is not just mathematical reason but that this original Reason is also Love," and Pope Francis said in a homily of Santa Marta in 2015 that "God goes is greater than our human calculations."

The theological pastoral logic and the geopolitical vision doesn't match with any kind of rigidity and needs an open way of thinking. We are not numbers. We are people.

Spadaro then discusses how the vision of Francis is the exact opposite of that espoused by fundamentalists of all stripes, "the jihadists and the neo-crusaders." In what I found the most compelling lines of the talk, lines that apply to our domestic as well as our foreign politics, Spadaro says:

What underlies the persuasive temptation for a spurious alliance between politics and religious fundamentalism?

Fear of chaos. Indeed, it functions thanks to the chaos perceived. The political strategy for political success becomes one of amplifying the rhetoric of conflict, exaggerating disorder, agitating the souls of the people by painting worrying scenarios that bear no relation to reality.

Religion at this point risks being instrumentalized as a guarantor of order, seduced by the promise of a political protector of its institutional needs. The appeal to the apocalypse justifies the idea of a god that seeks power, which is of course a god of human projection, rather than the true God, who already has supreme power yet who renounces it for our good. Fundamentalism reveals itself not as the product of a religious experience, but a poor and abusive version of it.

It is against this "abusive version" of religious experience that Francis is "carrying forward a systematic counternarrative to the narrative of fear." Spadaro does not mention the pope's own remarkable disregard for his own safety, joking that if the plane bringing him to the Central African Republic was not going to be able to land due to the violence, he wanted to come down in a parachute.

Spadaro does mention the fact that the pope's vision is, ultimately, the only one available to the sincere Christian: "The love typical of the Christian is not only love for the 'neighbor,' but also love for the 'enemy.' When we look at those doing evil through the eyes of pietas, then what triumphs is something that is humanly inexplicable — and perhaps also 'scandalous.' It is the intimate force of the Gospel of Christ: love of our enemies. This is the triumph of mercy."

Spadaro relates how the pope wishes to distance Catholicism from any suggestion that it is a guarantor of power, any lingering vestige of Constantinianism. "Not for Bergoglio some ideal Catholic 'ethnicism' or 'tribalism'! The notions of roots and identity do not have the same content for the Catholic as for the Neopagan world. Ethnic roots that are triumphalist, arrogant and vindictive are the opposite of Christianity," he said, in words that the likes of Steve Bannon should contemplate long and hard.

As soon as you read Spadaro's citation to, for example, the pope's visits to Korea and Sarajevo and Cuba, you see how the image of the field hospital informs the pope's words and gestures. But it takes Spadaro's comprehensive mind to relate the different themes of this pontificate into a coherent whole, helping us understand how the singularity of the vision is expressed in myriad different ways.

Francis recaptures the radicalness of the Gospel. He is so comfortable with the poor and the powerless because he is acquainted with God who is their champion. The poor are not confused by the image of crucified God: They grasp his closeness to them in that image. It is the powerful who should, like the centurions, quake before God's revelation.

In his talk at Notre Dame, Spadaro spelled out Francis' mercy-drenched vision of a world in which no one and nothing is ever considered beyond hope or love, and not as some abstract ideal, but as the lived reality to which we Christians are called by our baptism. How far we poor humans have to go.