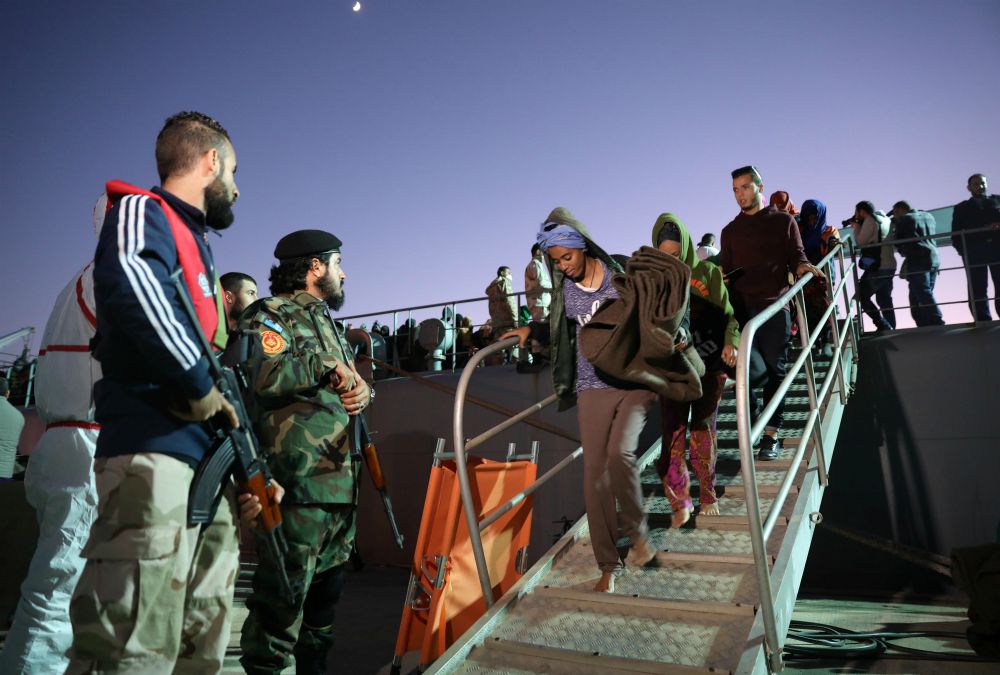 Migrants arrive Nov. 24 at a naval base in in Tripoli, Libya, after they were rescued by the Libyan coast guard. (CNS/Reuters/Hani Amarars)

Pope Francis gave a few talks recently which, together, fill in the picture of where this pontificate is as we approach the fifth anniversary of his election next March. In each, we see how different his vision and voice are from what we often hear at Mass on Sunday or pick up from the speeches at a U.S. bishops' conference meeting.

On the first World Day of the Poor, the Holy Father preached on the parable of the talents. The entire thing is remarkable. But, in focusing on wicked servant who buried his one talent and merely returned it to the master, Francis says the servant committed the sin of omission:

What made the master displeased with him? To use a word that may sound a little old-fashioned but is still timely, I would say it was his omission.

His evil was that of failing to do good. All too often, we have the idea that we haven't done anything wrong, and so we rest content, presuming that we are good and just. But in this way we risk acting like the unworthy servant: He did no wrong, he didn't waste the talent; in fact he kept it carefully hidden in the ground. But to do no wrong is not enough. God is not an inspector looking for unstamped tickets; he is a father looking for children to whom he can entrust his property and his plans.

I have always thought the key word in that parable was "fear": The wicked servant buried his one talent because he feared his master and, similarly, if we look at the God revealed by Jesus Christ and are seized with fear, our faith will be sterile too. But Francis then went on to explain how omission has social consequences:

Omission is also the great sin where the poor are concerned. Here it has a specific name: indifference. It is when we say, "That doesn't regard me; it's not my business; it's society's problem." It is when we turn away from a brother or sister in need, when we change channels as soon as a disturbing question comes up, when we grow indignant at evil but do nothing about it. God will not ask us if we felt righteous indignation, but whether we did some good.

Here Francis touches on a consistent theme of his pontificate, the globalization of indifference and how the ambient culture, driven by the market and its mechanisms, creates this culture of indifference. It is not merely a matter of personal sloth, of not paying enough attention to the poor, although it is also that. It is that we are constantly told what is important, offered a series of products that will make life easier, instructed on how to dress properly so we will be noticed, and offered news casts that focus on the tastes and concerns of the professional, upper-middle class. (And then we are surprised when Trump wins the presidency!) The pope points to the Gospels, where we will learn about Jesus' tastes and desires, specifically to the Gospel passage we heard this past Sunday and which follows the parable of the talents, Matthew 25: "Whatever you did for one of these, the least of my brethren, you did for me."

In his World Day of Peace message, released last week, Francis focuses on migrants and refugees. He cites his two immediate predecessors, Pope Emeritus Benedict XVI and St. Pope John Paul II, in explaining the link between violence and migration, but also notes that people leave for other reasons as well. A key passage for those of us in the United States and Western Europe was this:

Most people migrate through regular channels. Some, however, take different routes, mainly out of desperation, when their own countries offer neither safety nor opportunity, and every legal pathway appears impractical, blocked or too slow.

Many destination countries have seen the spread of rhetoric decrying the risks posed to national security or the high cost of welcoming new arrivals, and thus demeaning the human dignity due to all as sons and daughters of God. Those who, for what may be political reasons, foment fear of migrants instead of building peace are sowing violence, racial discrimination and xenophobia, which are matters of great concern for all those concerned for the safety of every human being.

That "great concern" certainly has not sufficiently manifested itself in the attitudes of too many Catholics in the United States. Too many pulpits ring out with ample and appropriate concern for the unborn, bit offer little or silence for the undocumented. Too many conservative media outlets repeat the evil tropes that emanate from the White House with regularity.

Francis points us in a different direction from the "violence" of xenophobia: "Offering asylum seekers, refugees, migrants and victims of human trafficking an opportunity to find the peace they seek requires a strategy combining four actions: welcoming, protecting, promoting and integrating." The Catholic Church has always done this work. The Knights of Columbus was started to facilitate this work. I wonder if they will have a "Fortnight for Immigrants" now that the Health and Human Services contraception mandate has gone away!

Finally, this weekend Francis was not able to attend a meeting with labor leaders sponsored by the Dicastery for Integral Human Development because he was getting ready for his trip to Asia. But he sent a letter to Cardinal Peter Turkson, prefect of that dicastery, to be read at the meeting that was remarkable.

Pope Francis gave a brief, one-paragraph, summation of the church's social teaching as it pertains to work, quoting from Paul VI, St. Pope John Paul II and the "Compendium of the Social Doctrine of the Church":

Blessed Paul VI, in his Encyclical "Populorum progressio," states that "development … cannot be restricted to economic growth alone. To be authentic, it must be well rounded," that is, it must fully promote the entire person, and also all people and populations. And since "a person flourishes in work," the social doctrine of the Church has highlighted on several occasions that this is not one issue among many, but rather the "essential key" to the whole social question. Indeed, work "is the condition not only for economic development but also for the cultural and moral development of persons, the family, society.

Our friends on the right can quibble all they want about what the church's social doctrine has to say about labor and unions, but I defy them to point to anything in the full body of social doctrine that affords capital the central and positive role our teaching assigns to labor. It cannot be done, and Francis shows why: because issues of work, and the social nature of work, are not only economic issues but anthropological issues, and in Christian anthropology, work is central to human dignity. Capital and capitalism are not. The pope makes this explicit later in the talk, saying, "Work cannot be considered as a commodity or a mere tool in the production chain of goods and services, but rather, since it is the foundation for development, it takes priority over any other factor of production, including capital. Hence the ethical imperative of 'defending job,' and of creating new ones in proportion to the increase in economic viability, as well as ensuring the dignity of the work itself."

Pope Francis then focuses this integral role of work and its relationship to the need to protect "our common home" from environmental degradation as set forth in his sole social encyclical Laudato Si'. Francis said:

The interdependence between work and the environment obliges us to re-set the kinds of employment we want to see in the future and those that must be replaced or relocated, such as the activities of the combustible fossil fuel industry, which pollutes. A shift from the current energy industry to a more renewable one is unavoidable to protect our mother earth. But it is unjust for this movement to be paid for with the labor and homes of those most in need. Or rather, the cost of extracting energy from the earth, a universal common good, cannot fall on workers and their families. Trade unions and movements that know the connection between labor, homes and land have a great contribution to give in this respect, and must do so.

This is an issue that will command much attention in the years ahead, not merely helping those who, like coal miners, will lose good-paying jobs due to necessary environmental regulation and changes in the economy, but also looking at what kind of labor laws will govern the emerging sustainable economy.

In all three talks, we see Francis articulating the social doctrine of the church in its fullness, not trimming those parts that do not comport with modern capitalism! His interest is not in any ideology. (On one of the cable shows this week, I heard former Congressman Barney Frank explain the Republicans' ideological commitment to avoiding any thought that capitalism might need regulation. He quotes Sen. Dick Durbin to the effect that "Republicans react to regulation the way the devil reacts to holy water.") The pope's only interest is rooting the church's social doctrine in our Catholic spiritual and theological life and in articulating that doctrine in ways the world can hear it — because the world needs it. And the rest of should not be fooled: Much of the organized opposition to Francis has nothing to do with how we care for the divorced and remarried. It is this, his trenchant critique of modern capitalism, that keeps the money flowing to conservative outlets and organizations intent on marginalizing what the pope says. But he will keep saying it because it is true.