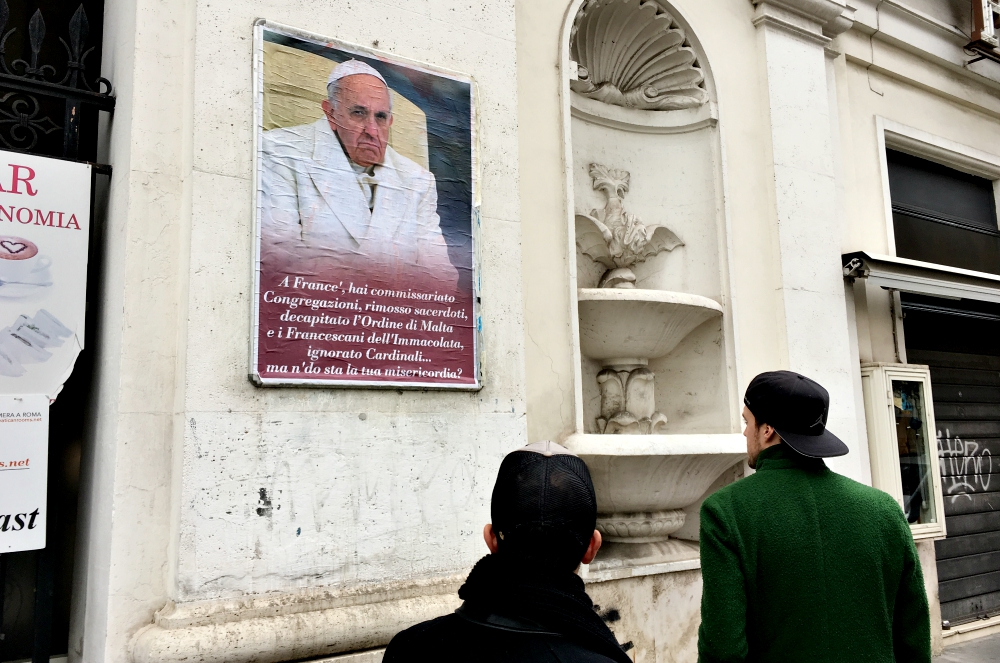 People look at a poster expressing criticism of Pope Francis in Rome Feb. 5, 2017. Numerous copies of the poster were placed in the center of Rome but were quickly covered or removed by city authorities. (CNS/Paul Haring)

A little more than a year ago, I did a three-part series examining the opposition to Pope Francis. In the first of those essays, I argued that the opposition to Francis was rooted in a misconception about the reception of Vatican II and, indeed, about the Second Vatican Council itself.

I stand by that assessment, but it is increasingly clear that the opposition to Francis comes not only from misconceptions about Vatican II but actual hostility to the council and to all the popes since. In short, the situation is even worse than I had suspected.

The latest evidence comes from a book by E.M. Radaelli that places much of the blame for what he discerns as a quasi-heretical modernism in the church on the shoulders of Joseph Ratzinger! Here is how Andrea Tornielli characterizes this new volume:

The volume aims to "convince the old professor, then Pope, now cardinal again, to reject, publicly, immediately and in full, all the "improper concepts of his Introduction to Christianity" which "infect the pages of the book, before it is too late for him." And he wants "to demonstrate to the widest possible number of reachable readers, how false and misleading are all the doctrines taught, so as to help the Church return to the solidity of her faith forever."

The irony here is enormous. I read Ratzinger's Introduction to Christianity years ago, and loved it. Whenever my liberal friends would attack Ratzinger, it was clear that they either had not read his work or misunderstood it, or were so biased by their dislike of some of his actions as prefect of the Congregation for the Doctrine of the Faith that they could not or would not see the gems in his theology.

Another book, The Dictator Pope, has been making the rounds of conservative organizations and media. Published anonymously, the Catholic Herald apparently knows who the author is because its deputy editor, Dan Hitchens, interviewed him. I do not trust books published under a pseudonym and most of the charges — that the pope is heavy-handed, that he promotes his allies and not those who oppose him — could be said of any pope. Indeed, it is remarkable to me that Francis has not cashiered more cardinals and curial officials left over from previous pontificates.

That has not kept people like Fr. John Zuhlsdorf and Fr. John Hunwicke from championing the book on their websites.

Zuhlsdorf and Edward Pentin at the National Catholic Register report on a statement from three bishops in Kazakhstan that directly challenges Amoris Laetitia. I do not mean to nitpick, but Pentin's way of recounting the Kazak bishops' claims is significant. For example, he writes:

In view of this "ever increasing confusion" in the Church, the bishops reassert the Church's teaching on the indissolubility of marriage, arguing that admitting some "remarried" divorcees without an annulment to Holy Communion, and not living in continence, is tantamount to a "kind of introduction of divorce in the life of the Church."

There is no sense that the Kazak bishops are here asserting a controverted point, no "what they claim is the Church's teaching on the indissolubility of marriage," no introduction of an adjective like "supposed" to make it clear that these are claims, not facts. It is hard to know where the bishops end and Pentin begins.

Additionally, after the pope's decision to post the statement of the bishops of Buenos Aires, Argentina, and his response in the Acta Apostolicae Sedis, are there really grounds for "confusion" any longer? The Kazak bishops (and Pentin for that matter) may not like the definitive interpretation given by the pope, but there is no longer any reason for confusion.

It is clear that the opposition to Francis is not diminishing in volume, although I still have to wonder how widespread it is. In the current issue of The Tablet, Vaticanista Marco Politi writes:

As for the radical opposition to Francis, it has chosen the way of a reckless escalation of hostility to the Pope, using the post-synodal exhortation Amoris Laetitia as its platform. There have been organised petitions to the College of Cardinals, the dubia ("theological doubts") signed by four cardinals — Raymond Burke, Walter Brandmüller, Carlo Caffarra and Joachim Meisner, the latter two since deceased — a fake Osservatore Romano mocking Bergoglio, and posters taunting him plastered on walls in the centre of Rome, where they were seen by thousands of tourists and Romans. And there has been a relentless war against him on ultra-conservative ­websites.

Lots of sound and fury, to be sure, but does it signify anything? It signifies only that there are some people in the church who have never accepted Vatican II, who approved of St. Pope John Paul II and Pope Benedict XVI only insofar as they seemed to be reining in the reforms of that council, and who now, faced with a pope who is determined to unleash, not to rein in, the reforms that council called for, have been smoked out of their pre-Vatican-II lairs.

Like those who immediately opposed the council, they mistake the church as it was during the reign of Pius IX for the church as it ever was. The council urged the church to return to the sources, not to adopt modernity willy-nilly. And that is what Francis is calling for as well, right down to his desire for a poor church for the poor.