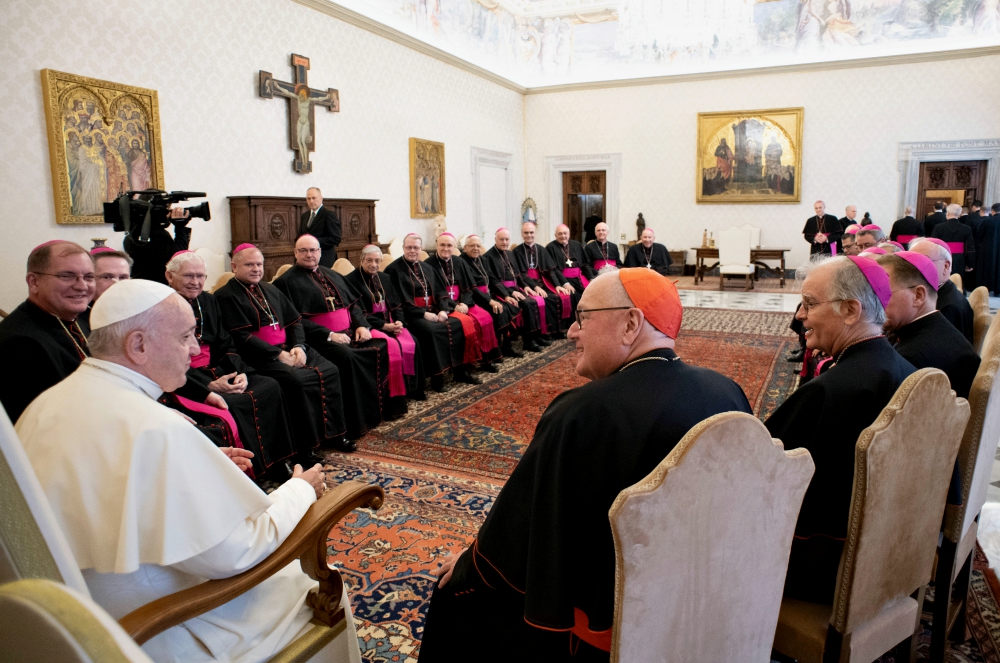 Pope Francis leads a meeting with bishops from the state of New York at the Vatican Nov. 15, 2019. The bishops were making their ad limina visits to report on the status of their dioceses to the pope and Vatican officials. (CNS/Vatican Media)

What should we be looking for in the life of the church in 2020? What issues and personalities will likely change the trajectory of ecclesial history?

In December, Pope Francis named Filipino Cardinal Luis Antonio Tagle to become prefect of the Congregation for the Evangelization of Peoples, historically known as the "red pope." He will be responsible for creating the ternas from which the pope will select bishops for missionary dioceses. 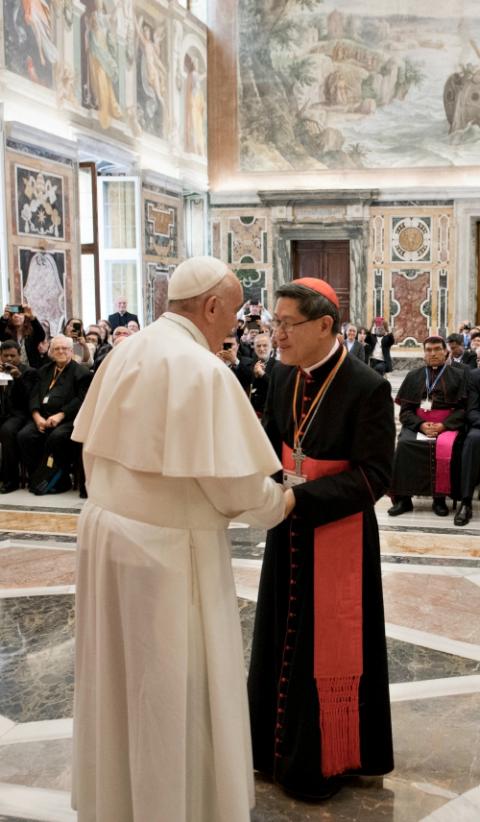 I am told that this appointment was the first of several and we can expect a new prefect at the Congregation for Bishops sooner rather than later as the incumbent, Canadian Cardinal Marc Ouellet, has asked to be replaced. Ouellet's congregation has often dragged its heels, frustrating the appointment of more pastoral prelates, and a new, dynamic leader might shake things up.

Cardinal Luis Ladaria, prefect of the Congregation for the Doctrine of the Faith, turned 75 last April, but so far, no word on his being replaced.

Of special concern to Americans will be the likely naming of a new American prelate to be a member of the Congregation for Bishops when Cardinal Donald Wuerl turns 80 on Nov. 12. This is an onerous job, but a consequential one, requiring monthly trips to Rome but also providing a seat at the table when new candidates for the episcopacy are discussed and referred to the pope.

There are really only two candidates at the moment: Cardinal Joe Tobin, who lives 10 minutes from the airport in Newark, New Jersey, and Cardinal Kevin Farrell, who is already in Rome as prefect of the Dicastery for Laity, Family and Life. Either one would be an excellent choice as both are champions of Francis and neither is an alumnus of the North American College. It is imperative that the nuncio and the congregation look beyond the walls of the North American College for candidates.

Three major archdioceses are either vacant currently or have an incumbent who is past the retirement age: Atlanta, Philadelphia and St. Louis. The three pose different challenges, with Atlanta the face of the emerging church, fast-growing and largely Latino, while Philadelphia and St. Louis, once home to cardinals, represent the declining church in the Northeast and Midwest.

In Philadelphia, the succession will be noteworthy first because outgoing Archbishop Charles Chaput has served as a leader of the culture warrior wing of the episcopacy and, second, because Philly has been a bastion of clericalism for more than a century. The seminary property has been sold and remaking that institution gives the new archbishop a chance to really change the trajectory of the clergy in what remains a large archdiocese.

The Diocese of Birmingham, Alabama is a small diocese, with only 104,125 Catholics, or 3.4% of the population. But the diocese is home to EWTN and so that appointment will be critical.

The Diocese of Buffalo, New York, has 727,125 Catholics, or 47.6% of the population, and every last one of them has been demoralized by now-retired Bishop Richard Malone's mishandling of clergy sex abuse. They need a dynamic pastor of souls in that historic diocese.

Will these changes alter the direction of the bishops' conference? Well, we are a people of hope but we still must be realistic. As I mentioned Monday, the ad limina visits to Rome are reportedly having a profound affect on some of the U.S. bishops. Their time with the Holy Father shows that he is not the evil demon Archbishop Carlo Maria Viganò and his minions at LifeSiteNews would have you think he is.

But we should not be naive. Your typical U.S. bishop may be a man of prayer like the pope, but they have acquired their position in the church because of certain managerial capabilities and/or because they made useful contacts in Rome while studying or working there. Francis famously never worked or studied in Rome.

And most of the bishops, even those who admire the pope, fail to recognize the degree to which they have been sold a bill of goods on the religious liberty front, on pro-life strategies, and — in the interest of evenhandedness — the limits of noninterventionism in foreign policy and inadequacy of antipoverty programs in domestic policy.

And I fear that many are mesmerized by the approach to evangelization suggested by Los Angeles Auxiliary Bishop Robert Barron, not because it is effective, but because they have no alternative. The path suggested by Francis is beyond the scope of their imagination.

I dread thinking about the number of times we will be hearing that abortion is the "preeminent" issue for Catholic voters this year. It isn't. And if former Vice President Joe Biden is the Democratic nominee, we can expect half a dozen reactionary priests to take it upon themselves to deny the visiting candidate Communion when he comes to their church, even though said priest is in no sense Biden's pastor and, consequently, should not be making that kind of decision in the first place. And Wilmington, Delaware, Bishop Francis Malooly is already 75 and we can all hope and pray his successor is, like Malooly, disinclined to turn the altar rail into a political battlefield.

One other aspect of the bishops' effects on the voting behavior of Catholics: It will continue to be negligible. Two areas of life where the bishops have lost credibility among their own people? The bedroom and now the voting booth.

The pope has made great strides in changing the culture of the Catholic Church in a variety of ways, not least when it comes to facing the scourge of clergy sex abuse. Those efforts must continue. Any inkling of foot-dragging will only increase the animus in which many hold the church and drive many Catholics to despair or departure. The knives are out. 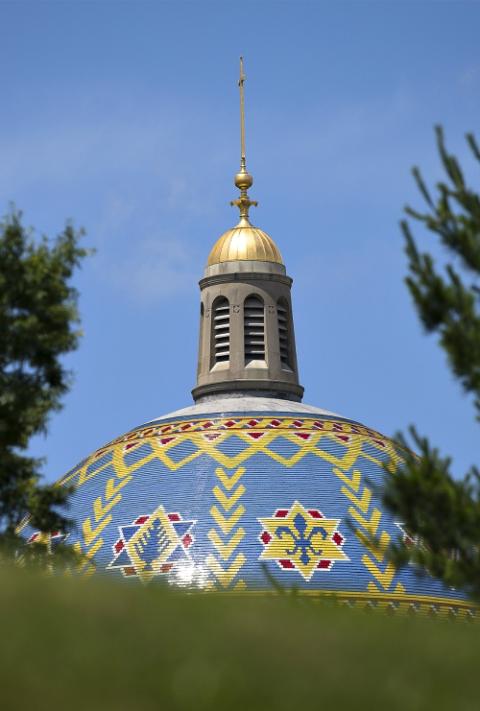 The dome of the Basilica of the National Shrine of the Immaculate Conception is seen June 6, 2019, near the grounds of the Catholic University of America in Washington. (CNS/Tyler Orsburn)

Apart from the issue of sex abuse, traditional ways of doing things, such as prelates sending checks to one another to commemorate an anniversary or to defray moving expenses, must be reexamined and retired as well. This practice, to which I think it is wrong to automatically attribute improper motives, should go the way of all flesh, joining episcopal mansions as a thing of the past.

I wish I could predict that we will see the bishops get hold of the situation at their own university, the Catholic University of America, but that is one confrontation none of them seem eager to have. For most of the bishop board members, it is not in their backyard.

Washington Archbishop Wilton Gregory is the school's chancellor and I hope he will interest himself in addressing some of the problems at the school, but he just turned 72 last month and, in my experience, bishops only tackle problems they think they have time to resolve and the situation will likely take a decade to set right. Perhaps the Congregation for Catholic Education could interest itself in the situation.

Similarly, Catholic health care will continue to scandalously pay its CEOs millions, adding to the income inequality that insults Catholic teaching and threatens our nation's social fabric. How did we go in 20 short years from a sector of the church that was run entirely by religious women who had taken vows of poverty to a sector run by rich white guys? Again, maybe some encouragement for change could come from Rome, where the Congregation for Institutes of Consecrated Life and Societies of Apostolic Life might interest itself in differential pay scales at institutions owned by religious orders.

Whatever else happens, you will be able to read about it, and about what it means, here at NCR.