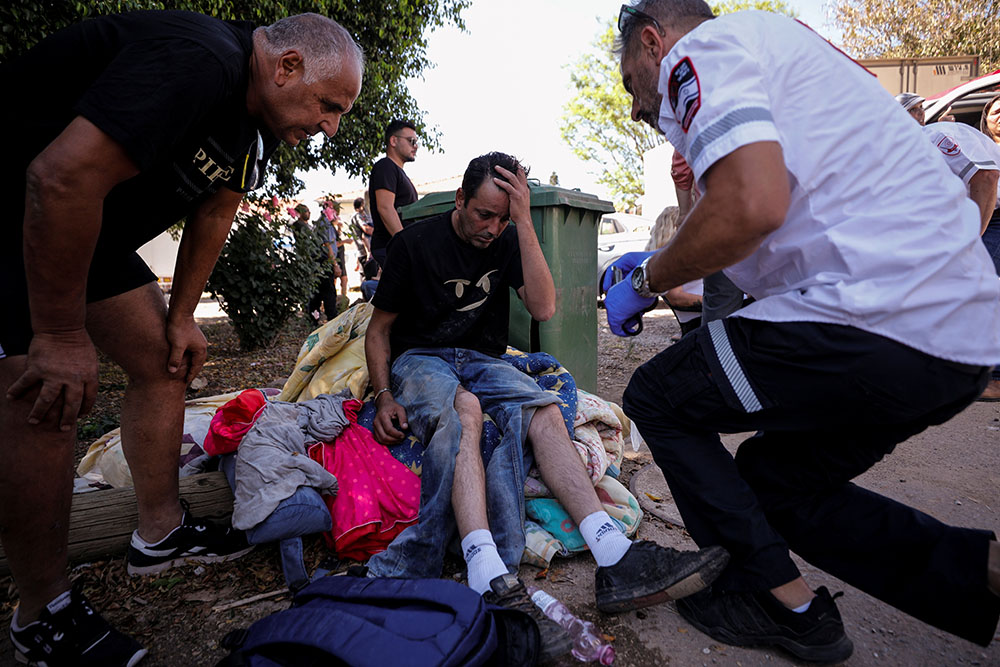 An Israeli medic treats a man who was wounded after a rocket launched from the Gaza Strip landed near homes in Moshav Zohar, Israel, May 13. (CNS/Reuters/Amir Cohen)

Thanks be to God, a cease-fire between Israel and Hamas has stopped the fighting. Many questions linger. It was impossible to remain unmoved by the sight of innocent children killed, so it should be expected that many would be disturbed by the violence in Gaza. Sympathy and empathy, important though they are, cannot replace the moral obligation to be intelligent in assessing the true sources of the conflict between Israelis and Palestinians.

Sadly, an increasing number of Americans on the left, including the Catholic left, have put pressure on President Joe Biden to recalibrate our nation's support for Israel. They have bought into a narrative that is not only one-sided; it is difficult to see how it will improve the lives of Palestinians.

A prominent example is that of Congressman Jamaal Bowman — I could cite others such as Congresswoman Alexandria Ocasio-Cortez and Jesuit Fr. David Neuhaus. Bowman took to Twitter to take issue with an op-ed from fellow Congressman Ritchie Torres. "My brother Ritchie, this is not about a Twitter mob. This is about justice, humanity, and equality," Bowman's thread began. "This is about Palestinians deserving peace, land, and self-determination, like everyone else.

"This is about Palestinians having their land and homes taken from them and our ignorance of Palestinian pain," Bowman continued.

Of course, the Palestinian people have a right to "peace, land, and self-determination." The fulfillment of those rights for one group, in conflicts over rival claims to land, requires stipulating that the other group also has the same rights.

Hamas, the terrorist organization that controls Gaza, has built its entire political existence on its refusal to seek peace, cede land or acknowledge the right of Israelis to self-determination. "Initiatives, and so-called peaceful solutions and international conferences, are in contradiction to the principles of the Islamic Resistance Movement," reads Article 13 of the Hamas Covenant from 1988. And the covenant is quite clear that the organization cannot negotiate on this point:

Some Israelis, though conspicuously not the very secular and socialist founders of the state of Israel, believe that God bestowed this land on the Jews. But it is one of the hallmarks of any modern liberal state that religious dogmas should not intrude into the making of political constitutions. One of the principal complaints liberals rightly make against recent Israeli governments is that concessions to religious settlers in the West Bank have made the "land for peace" formula increasingly difficult to imagine.

Without the counsel of the Almighty, throughout history disputes about land, personal or national, are traditionally resolved by a partition. So it was in 1948, when the British Mandate ended and the United Nations proposed to divide Palestine into a Jewish state and an Arab one. The Arabs refused the compromise and attacked the nascent Jewish state.

The United States immediately recognized the Jewish state. Some historians have credited President Harry Truman's relationship with his former business partner, Edward Jacobson, for the president's willingness to recognize Israel over the objections of the State Department, but Truman was also influenced by the fact that the former mufti of Jerusalem, Muhammad Amin al-Husayni, who had collaborated with the Nazis throughout World War II, was active in Palestinian nationalist circles in Cairo after the war.

In the years that followed, the displacement of Palestinians during the 1948-49 war was mirrored by the displacement of hundreds of thousands of Jews from throughout the Arab world as Jewish communities dating back centuries were expelled. Most, if not all, fled to Israel.

The rest of the history is familiar to all: the Suez crisis of 1956; the Six-Day War in 1967, resulting in the unification of Jerusalem and the Israeli occupation of Gaza, Sinai and the West Bank; the 1971 banishment of Yasser Arafat and the Palestinian Liberation Organization by King Hussein of Jordan; the Yom Kippur War in 1973; the historic visit of Egyptian President Anwar Sadat to Israel and the subsequent Camp David Accords.

I remember in 1978 watching President Jimmy Carter standing with Sadat and Israeli Prime Minister Menachem Begin on the South Lawn of the White House as they signed the historic peace treaty. One had the sense that peace was finally possible. Three years later, Sadat was murdered by Islamic extremists.

Throughout these years, the intifadas and the Israeli war in Lebanon kept hopes in check. In 2005, watching archconservative Ariel Sharon negotiate with Mahmoud Abbas, who had taken over from Arafat, and Jordan's King Abdullah and Egyptian President Hosni Mubarak, it was possible to dream again, but the dream was short-lived. 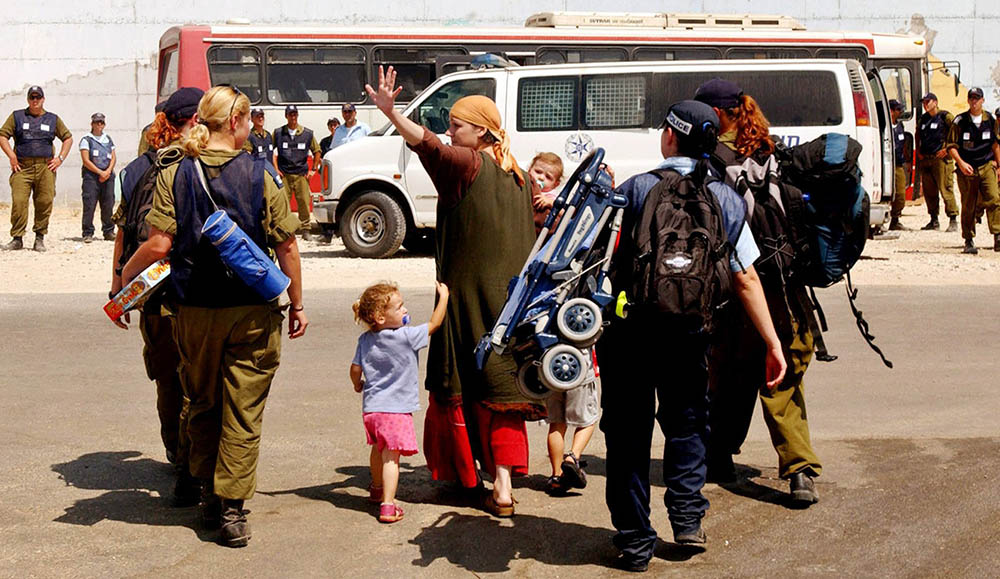 A Jewish settler waves as she and her family are escorted to a bus by Israeli soldiers and police officers during the forced evacuation of the Jewish settlement of Morag in the Gush Katif settlement bloc in the Gaza Strip Aug. 17, 2005. (CNS/Reuters)

In August of that year, the Israeli government ended the occupation of Gaza, forcing Jewish settlers in Gaza to abandon their settlements. Hamas won elections in Gaza the next year and defeated Fatah for control of Gaza the following year.

The current fighting was ignited by a controversy about the recitation of prayers over the loudspeakers of the Al-Aqsa Mosque when the Israeli president was giving a speech nearby to commemorate the anniversary of the unification of Jerusalem. Israeli police entered the mosque and cut the electric wires to the loudspeakers. It was enough to ignite the fire.

The underlying tension stems from Hamas' intransigence and Israeli Prime Minister Benjamin Netanyahu's mistaken belief that the quietude of recent years would last forever or that the suffering in Gaza would lead its people to throw Hamas out of power.

There are many reasons why the U.S. rightly stands with Israel, not uncritically but rightly. The state of Israel and the American republic are both children of the Enlightenment. Their political cultures are premised on universal human rights, and even when they violate those rights, their own founding documents stand in judgment against the violations.

Countries so constituted remain works in progress, to be sure. But President Joe Biden is correct to note that we live in a moment when authoritarian regimes, built on the ideas of the Enlightenment's critics, are challenging the world's democracies. We Americans, after four years of Donald Trump, have seen how fragile our constitutional structures are, even as we watched them triumph ultimately in the aftermath of the 2020 election. 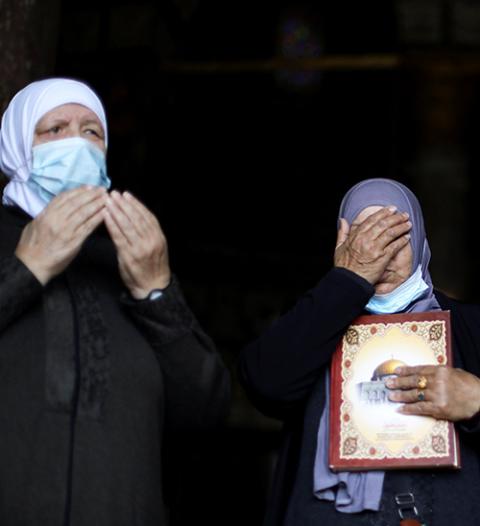 Palestinian women pray near the Dome of the Rock in Jerusalem's Old City April 16, on the first Friday of the holy month of Ramadan. (CNS/Reuters/Ammar Awad)

Hamas refuses to give women rights that we take for granted. For example, earlier this year, an Islamic court in Gaza ruled that women cannot travel without the permission of a male guardian.

Amnesty International, which has never been accused of carrying water for the Israeli government, detailed ongoing human rights abuses against women, the LGBT community and others. "The Palestinian authorities in the West Bank and the Hamas de facto administration in the Gaza Strip continued to crack down on dissent, including by stifling freedoms of expression and assembly, attacking journalists and detaining opponents," its report for 2020 stated.

I can understand sympathy for the civilians caught in the conflict of any war, but I confess I am baffled by the silence of Israel's critics about the depredations of Hamas. The suffering of the people of Gaza is in large part the result of decades of political failures by the political leadership of Palestinian nationalism. They oppress themselves with impossible dreams of reclaiming all of Palestine by military force. "There is no solution for the Palestinian question except through Jihad," says the charter.

Until Hamas accepts Israel's right to exist, there will never be peace. Those who demand nothing of Hamas, let alone this most essential political commitment, do not help the Palestinian people. Enabling the intransigence of the Hamas regime does nothing to help the people of Gaza.

No one should be afraid to condemn Israel's policies under Netanyahu, from his support for additional settlements in the West Bank to his insistence on a disproportionate response to violence. Indeed, you can read such condemnations in half a dozen newspapers published in Israel every day and hear them on the radio and TV.

We can condemn violence on all sides, but only one regime in this conflict is a liberal democracy of a kind that makes a natural ally for the United States. America's disagreements with Israel are about policy, not about the legitimacy of its government. It is morally irresponsible to condemn Israeli policy without venturing a word of reproach for the Gaza regime itself.