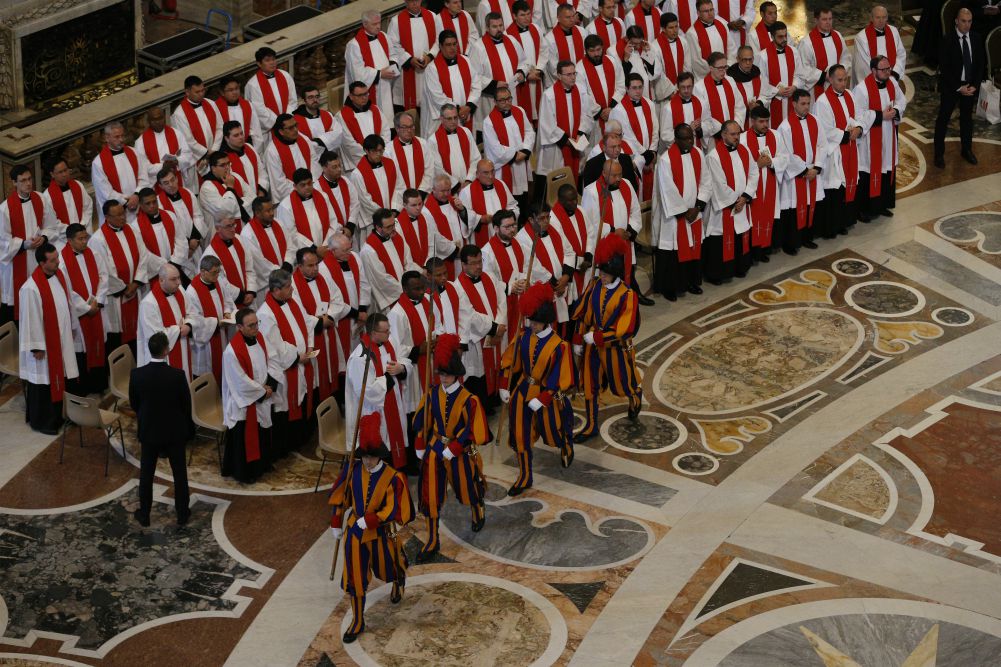 Every sentence of James Carroll's recent article in The Atlantic, "Abolish the Priesthood," is theologically inept, historically anachronistic, self-referential, or all three. None of it is a surprise.

Carroll's embrace of theology is thoroughly opportunistic. At one point, he yearns for the pre-Constantinian church of Jesus' early followers, but later he states, "When the Catholic imagination, swayed by Augustine, demonized the sexual restlessness built into the human condition, self-denial was put forward as the way to happiness. But sexual renunciation as an ethical standard has collapsed among Catholics, not because of pressures from a hedonistic 'secular' modernity but because of its inhumane and irrational weight." But it is in the Gospels themselves that Jesus advocates self-denial, encourages the unmarried to remain celibate, and tells his followers to take up their cross and follow him. Following Jesus can lead down many different paths, but none of them have to do with sexual liberationism.

Turning to history, Carroll repeats the kind of claims that have long filled his books and articles. For example, he writes:

Clericalism's origins lie not in the Gospels but in the attitudes and organizational charts of the late Roman empire. … But under Emperor Constantine, in the fourth century, Christianity eﬀectively became the imperial religion and took on the trappings of the empire itself. A diocese was originally a Roman administrative unit. A basilica, a monumental hall where the emperor sat in majesty, became a place of worship. A diverse and decentralized group of churches was transformed into a quasi-imperial institution — centralized and hierarchical, with the bishop of Rome reigning as a monarch. Church councils deﬁned a single set of beliefs as orthodox, and everything else as heresy.

He misses a step here. The adoption of some of the trappings of imperial Rome were not simply imposed upon the church as an alien accretion, nor adopted as such by power-hungry clerics. Christians in the fourth century, like Christians in our own time, try to make sense of the self-revelation of God in Jesus Christ. They avail themselves of the categories and ideas and experiences they know. If you want to build a beautiful church to express your sense of wonder before the astounding claims of God's work among his people, and you have seen Roman basilicas and find them beautiful, what's wrong with building churches in a similar way? Carroll states later in the article, "Ironically, the Church, which sponsored my civil-rights work and prompted my engagement in the antiwar movement, made me a radical." Why is it okay for him to intertwine his faith with worldly reference points and commitments but it was not okay for fourth century Christians to do the same?

To face this question, Carroll would have to develop a critical distance from himself, and this he cannot do. Consider the sentences that follow the one just quoted. He writes, "I was the Catholic chaplain at Boston University, working with draft resisters and protesters, and soon enough I found myself in conﬂict with the conservative Catholic hierarchy. It only gradually dawned on me that there was a tragic ﬂaw deep inside the institution to which I'd given my life, and that it had to do with the priesthood itself. My priesthood." Whose priesthood? Christian priesthood — that of the clergy and that of the baptized — is a partaking in the priesthood of Jesus Christ. That is Theology 101, whether one is liberal or conservative. I concur with Carroll that clericalism is at the root of the clergy sex abuse crisis, but the idea that it is indelible is an idea for which he offers no arguments that do not involve the first person singular pronoun "I."

Carroll has never understood the Second Vatican Council. To him it was all aggiornamento and no ressourcement. He seems not to understand how doctrine develops, nor how it relates to history. He further fails to grasp that for the Catholic Church, while it must be historically conscious, the relevant history is also and always salvation history. The church cannot stay stuck in time, but it also cannot simply make things up as it goes along. And Carroll seems not to recognize the hideous slavery of being a child of one's own age.

His attacks on Pope Francis are an exercise in ignorance. He said Francis' response to the clergy sex abuse mess last year was "a meek call for a four-day meeting of senior bishops, to be held in Rome under the rubric 'The Protection of Minors in the Church.' This was like putting Mafia chieftains in charge of a crime commission." The meeting was consequential, resulting in astonishingly fast new policies and procedures for holding bishops accountable, implementing child protection policies worldwide, requiring all clergy and other ministers report sex abuse and any effort to cover it up. Is that meek? Is he really comparing Francis to a mafia don? Cardinal Sean O'Malley? Cardinal Blase Cupich? Archbishop Charles Scicluna? Did I miss the part in their careers when they acted like a criminal?

Carroll repeats the lie that former Cardinal Theodore McCarrick was "a close ally" of Francis. He complains that the pope responded to the allegations of former nuncio Archbishop Carlo Maria Viganò with silence, but while the pope kept silent himself, he encouraged the journalists on the plane back from Ireland to investigate Viganò's claims. Did Carroll do any investigating? I did. Viganò's claims were mostly bunk.

The biggest difference between Carroll and the pope is that Carroll essentially offers no path forward except — you guessed it — for all Catholics to become like him, to enter into "internal exile." He wants the church to preach not Jesus Christ and him crucified but James Carroll and him dissatisfied. This is no plan for the future. All he does in this article is tear things down; it is a fit of puerile iconoclasm. Francis has, in many different ways, proposed three paths forward for the Catholic faith: to rediscover the centrality of mercy in the kerygma of the Gospel; to go to the peripheries to experience the Gospel's potential for authentic liberation; and to adopt more synodal structures of ecclesial governance. All three are rooted in the ancient traditions of the church. They are both faithful to the tradition and fecund for evangelization. They are not self-referential.

My colleague Jesuit Fr. Jim Martin responded to Carroll's article by first noting, correctly, that The Atlantic never, ever, not in a million years, would have published an article calling for the abolishing of rabbis or imams. He shares my skepticism of Carroll's argument:

If this is The Atlantic's "deep dive" into the clergy abuse crisis, it represents something of a disservice to readers and the general public. Essentially, Mr. Carroll's lengthy (and, admittedly, in some places careful) examination of the clergy abuse crisis can be boiled down to: It's priests. He states his thesis with admirable concision at one point: "The very notion of priesthood is toxic." Using the old dictum that what is easily asserted is easily denied, I would respond: "No, it is not."

Martin is kinder than I am. I have always found Carroll's writings about the Catholic faith solipsistic and shoddy. He has used his distorted vision of the church to poison the minds of many educated people against the church, people who don't know better. Now, his writing has grown tiresome. Like too many boomer authors, he jumps from a whim to ontology in the twinkling of an eye: The priesthood did not work for Carroll, so the priesthood is the problem and must be abolished. It would be sad if he believed this and did not publish this rubbish. As he does publish it, his influence is pernicious.

Editor's note: A defense of James Carroll's article will be posted tomorrow, May 23, at NCRonline.org.