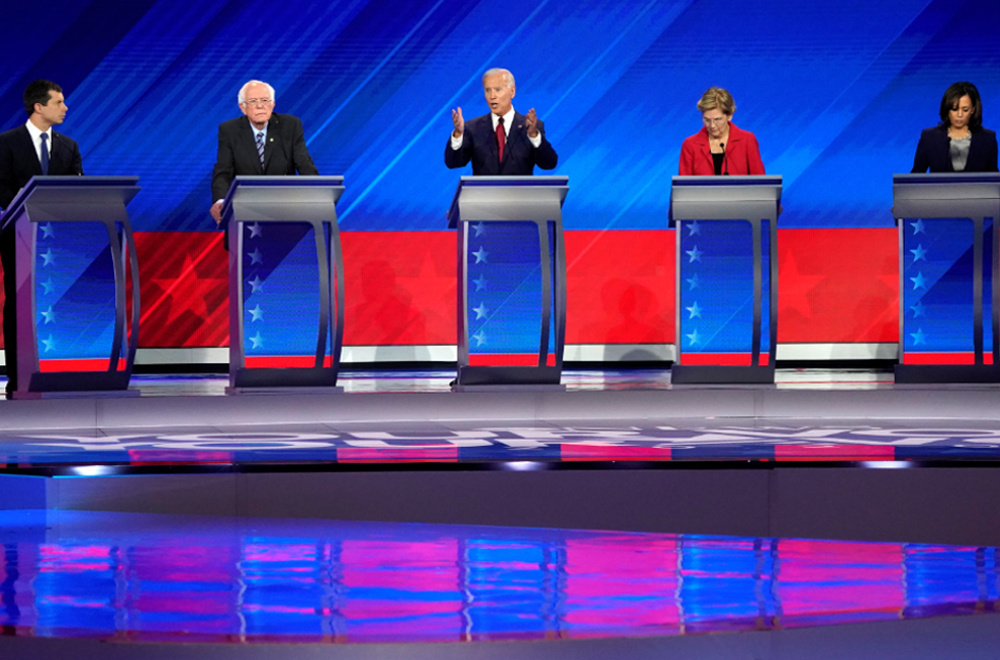 In last night's Democratic presidential debate, the biggest losers were the moderators. They entertained another 20-minute discussion of health care that provided precisely no new insights. Abortion was brought up, and it served to show how beholden the party is to pro-choice special interests: None of the candidates' comments would have survived a high school debate contest, a point none of the moderators challenged. And, toward the end, CNN anchor Anderson Cooper raised the issue of electability, which was about as helpful as talking about their favorite foods.

How did the candidates do?

No one had more at stake than Sen. Bernie Sanders. This was the first debate since his heart attack and he needed to appear as rambunctious and vigorous as he had at previous debates. He did not disappoint. After the first 19 minutes unhelpfully focused on impeachment, Sanders jumped in to remind the audience that they needed to start talking about the lunch bucket issues people really care about. On issue after issue, he was emotional, focused, and inspirational. On health care, he bested everyone else, including Sen. Elizabeth Warren. On income inequality, he was spot on.

Former Vice President Joe Biden also had a specific hurdle to overcome: While there has been no evidence that either he nor his son Hunter engaged in any corrupt activities in Ukraine, Sean Hannity's reckless allegations notwithstanding, Hunter Biden's lucrative business dealings in that desperately poor country smelled swampy. He handled that question well, repeating several times that his son's statement spoke for itself, which had the effect of putting a period on the discussion. Biden also had a strong moment on foreign policy, but mostly his answers were not as sharp as the candidates on either side of him, Sanders and Warren. That said, he did not falter sufficiently to create an opening for Sen. Kamala Harris or Mayor Pete Buttigieg. Unless Biden falters, this is a three-person race.

Warren's unwillingness to admit she will raise taxes to pay for Medicare for All, or that she will implement health care reform in a more pragmatic manner than she has so far indicated, may have made sense in the second debate, and it was passable in the third. This time it was tired and evasive. She also rebutted the moderate naysayers poorly. The problem is not that they do not dream big, it is that they seem to think that people get to choose their health care, when it is almost always their employer who makes that choice and their fixation on raising taxes is a Republican framing of the issue.

Warren recovered quickly when the conversation turned to income inequality, and some of the outlying candidates decided to try and take a shot at her. This served only set her up to shine on the issue she knows best and which has got her where she is. Her comments on impeachment, which opened the debate, were stronger than her competitors and, as in the first three debates, she is the most relentlessly on-message debater. This was the first debate in which she was the main target of the incoming attacks and she held her own, never too defensive and, apart from health care, parrying the attacks with her combination of fighting spirit and cool intelligence.

Apart from the top three, Harris and Buttigieg constitute the second tier, but neither one achieved the kind of breakthrough, viral moment they needed. Harris was hot and cold, and when she tried to shift the health care discussion towards a discussion of reproductive rights, it seemed too tactical and contrived. Her call for President Donald Trump's Twitter account to be shut down showed an indifference to the spirit of the First Amendment that was shocking in the way leftist politics is sometimes shocking these days.

Buttigieg was stronger and feistier than in previous debates but in some of his answers, he continued to seem like a caricature of the thoughtful philosopher-king at a time when the Democrats want a fighter. The pundits may gush over him but does anyone doubt that if he were a straight guy, no one would pay him any heed? If articulateness was enough, Jeb Bush would be president. Besides, as noted, both Harris and Buttigieg need Biden to fail for either of them to move up into the top tier. They are never going to take votes away from Sanders or Warren.

I am reluctant to even mention the other candidates who simply clutter the stage at this point. Some were better or worse than on previous outings, but so what? Having failed to distinguish themselves by this point in the campaign, their interventions reeked of self-promotion or futility and will not move the race. It is past time for them to leave the stage. This must be said: The discussion of Syria between Mayor Pete and Congresswoman Tulsi Gabbard should dispel forever the idea that military service constitutes a foreign policy credential. It won't, especially for Mayor Pete who conveyed real passion in his response, but it should. Both claimed their service legitimated their arguments, but those arguments relied on what they read in Foreign Affairs or The Nation, not what they saw in the field as soldiers.

It is frustrating having to listen to candidates with precisely no shot at the nomination ramble on, trying to make a splash so that someone will notice them. Oddly, it may help the front-runners in the long run because the expansive format does not permit the kind of sustained attack on any one front-runner that might do actual harm. Two things became glaringly obvious last night: 1) only a major slip by one of the front-runners has the potential to change the trajectory of the race and 2) Sanders and Warren have shifted the Democratic Party's center of gravity decidedly away from the neo-liberal orthodoxy that has held sway for 40 years and which paved the way for Trump to become president. Those two things seemed obvious to me before last night's debate. I wish I had watched the Nats beat the Cardinals.

Did last night change the trajectory of the race? Sanders overcame suspicions about the effects of his heart attack. Biden may have put questions from the Ukraine affair to rest but his campaign has been losing steam and I am not sure he arrested that decline. Warren's team needs to figure out how to introduce some pragmatism into the heath care discussion without opening too much light between her and Sanders. But the fundamental structure of the race did not change: It is a three-person race, unless Biden falters, which would open up a lane for Harris or Buttigieg. If Sanders or Warren falters, the other benefits. Unless there are banana peels in their future, this race will now come down to effective campaigning and organizing in Iowa, New Hampshire, Nevada and South Carolina.