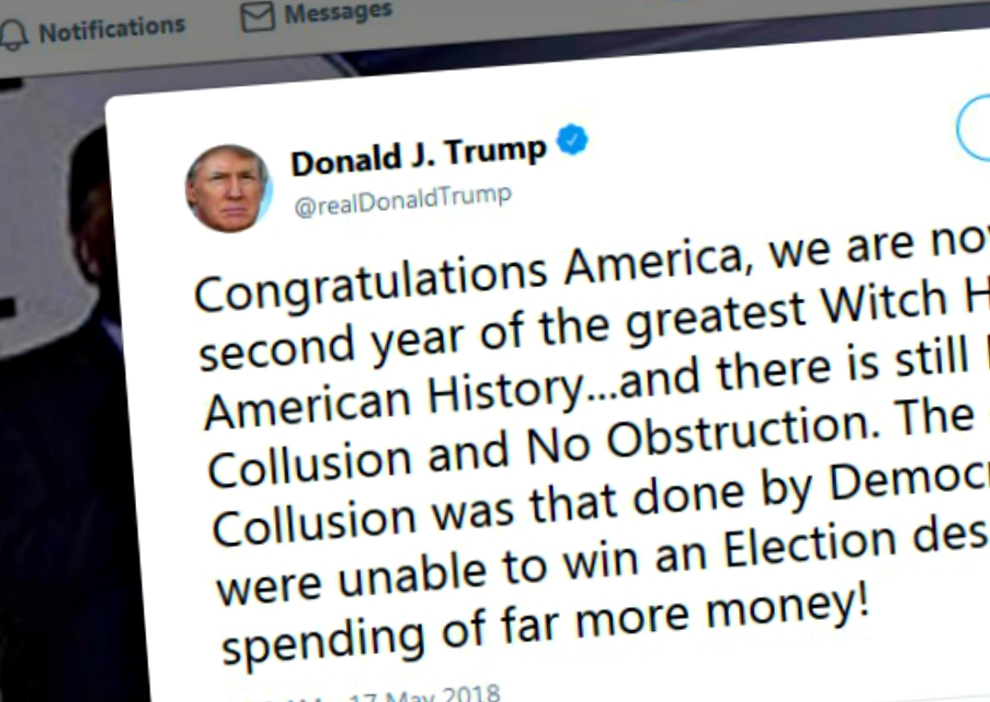 It's 9:52 a.m. Do you know how many lies the president has tweeted today?

Last Thursday morning, the president of the United States acknowledged the one-year anniversary of the appointment of former FBI Director Robert Mueller as a special counsel to examine Russian interference in the 2016 election. With three tweets, Donald Trump displayed the quintessence of the Trump political psyche: unhinged from reality, unbounded by any concern for veracity, and petulant like a whiny child.

The first tweet, sent out at 7:28 a.m., called the Mueller investigation the "greatest Witch Hunt in American History ... and there is still No Collusion and No Obstruction."

The investigation into possible collusion is ongoing, of course, and there have already been guilty pleas and multiple indictments in this case. More importantly, as recently released documents relating to a Trump Tower meeting convened by Donald Trump Jr., with Russians claiming to have dirt on Hillary Clinton, if Team Trump did not actually collude with the Russians, it was not for lack of effort.

The complaint about obstruction of justice is of a different order. I hope that whatever the president is finally charged with, I hope it is not only obstruction of justice in this case. Yes, it is a crime and it is a very serious crime, especially when the person charged is the nation's chief magistrate. But millions of Americans voted for the president knowing he was a liar, and I hope the Mueller investigation finds evidence of really treasonous behavior before Congress even thinks about impeachment.

The second tweet, blasted out at 8:45, used the weasel verb "seems" to qualify an outrageous charge, that the "Obama FBI 'SPIED ON THE TRUMP CAMPAIGN WITH AN EMBEDDED INFORMANT," amplifying a speculation made on "Fox & Friends" by former federal prosecutor Andrew McCarthy, a Fox news regular.

Of course, the FBI was never "Obama's" to begin with: The inclusion of the former president's name is there simply to rile up the right. The FBI remains one of the more independent arms of the executive branch and for good reason, as the country, but not our president, learned during Watergate.

The charge is akin to the one the president made last year that his predecessor had wiretapped Trump Tower. As FactCheck.org made clear, there was nothing to substantiate the allegation. Trump was plausibly correct when he finished his tweet saying, "If so, this is bigger than Watergate!", but the word "if" is made to carry an insurmountable weight outside of right-wing conspiracy fantasyland in that sentence. Does anyone really think President Barack Obama would have interfered with an FBI investigation in a way that would undermine Trump or the GOP? If anything, it is more likely the Obama administration bent over backward in the other direction, no doubt in part because they, like many people, assumed whatever else happened, there was no way Trump could actually win the election.

The third tweet is, in its way, the most astonishing. "Despite the disgusting, illegal and unwarranted Witch Hunt, we have had the most successful first 17 month Administration in U.S. history — by far!" our president tweeted. "Sorry to the Fake News Media and 'Haters,' but that's the way it is!"

I am not sure if this is what Pope Emeritus Benedict XVI meant when he warned against the dictatorship of relativism, but I suspect the mild-mannered pontiff, even though he had read deeply in St. Augustine, could not have imagined this degree of public BS combined with such evident personal insecurity, both coming from a person routinely and correctly deemed the most powerful person on the planet.

It is news to no one that presidents lie. Indeed, there are times when statecraft demands deceit. "In war, truth is such a valuable commodity, she must always be accompanied by a bodyguard of lies," Winston Churchill observed during his premiership. Bill Clinton famously told us he "did not have sex with that woman." Richard Nixon insisted he was not a crook when he was.

Still, this is different. Churchill, Clinton and Nixon knew they were lying. It is not at all clear if Trump is aware he is lying or if his solipsism is so complete he actually believes his own propaganda. And, more importantly, his lack of interest in doing anything about Russian interference in our elections raises a related question: Is his solipsism so complete that he is indifferent to foreign interference in our politics, so long as it helps him?

Either way, we are in uncharted territory here — I had almost written terror-tory. What is certain is that our children are getting a crash course in how not to run a democracy and it isn't pretty and it isn't going away anytime soon.