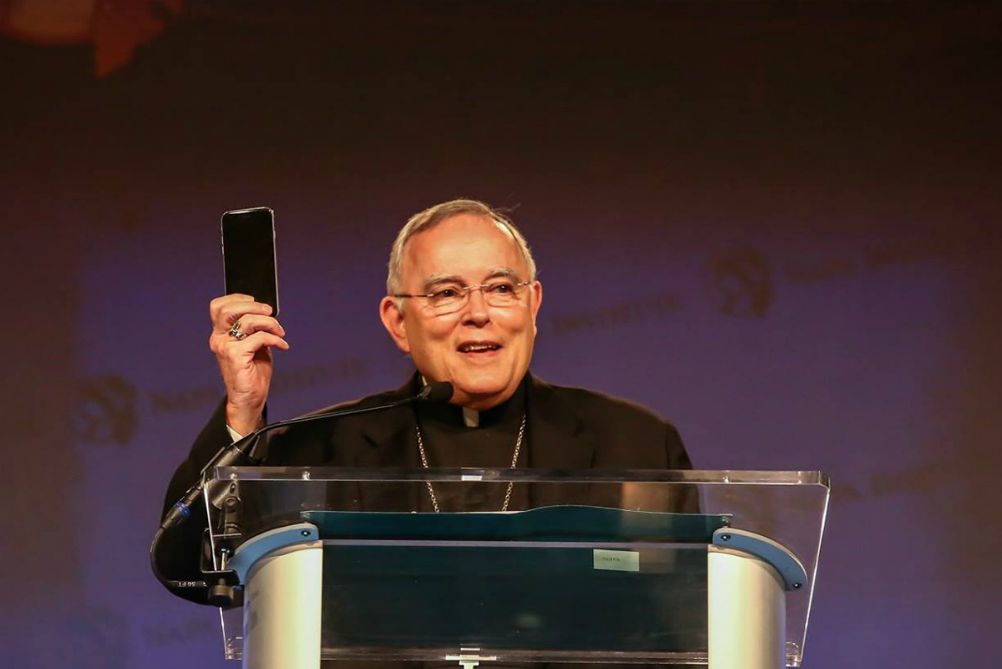 More evidence that ex-nuncio Archbishop Carlo Maria Viganò is simply a liar: In his most recent statement, he alleged that Pope Francis squashed an investigation into charges of sexual misconduct directed at the late Cardinal Cormac Murphy-O'Connor, archbishop emeritus of Westminster. But the first set of allegations came while Pope Francis was still in Argentina, in 2009-2010, and they were immediately referred to the United Kingdom police. All in all, there have been three investigations, and all resulted in determinations that the allegations were not credible. And Pope Francis did not quash anything. The Tablet has the story. Will mainstream media remember this the next time this lying ex-nuncio releases a statement?

Viganò's buddy Edward Pentin published a column about the meeting on clergy sex abuse the pope has called for next February. It shows that bashing gays is being defined as a measure of success by our friends on the right. Pentin also repeats the canard that Cardinal Daniel DiNardo is being "stonewalled" in his effort to get to the truth about how former Cardinal Theodore McCarrick rose through the ranks. It is true that the Vatican does not move as quickly as one would wish, but I would note that perhaps DiNardo should consult his notes from his time as a staffer at the Congregation for Bishops. It was at that time that McCarrick was promoted to become archbishop of Newark.

Yesterday, I wrote about Archbishop Charles Chaput's strange criticism of the Instrumentum Laboris for the synod. Turns out that I was not alone. Cardinal Blase Cupich also voiced his concerns to which Chaput offered a short, and rather weak, response. I think Cupich was even tougher on the original text than I was.

Mark Judge, Brett Kavanaugh's high school buddy, may be the most important American this week. The Washington Post looked at him and the beer-drenched sub-culture to which Judge and Kavanaugh belonged in the early 1980s. I remember that culture too, and, I remember that grinding was not considered sex, so Kavanaugh may be speaking honestly when he states he did not sexually assault Christine Blasey Ford: To him, that was not sex. I say the rest of us should stipulate the point provided he agrees to go through the rest of his life known as Brett "Grinder" Kavanaugh. And we should still object to him joining the court because whether you think he assaulted anyone or not, he clearly is a liar.

How crazy is the Catholic right these days? Fr. John Zuhlsdorf thinks he has found the true culprits in the clergy sex abuse crisis: It is not only homosexuality, it is Communion in the hand! Really, you can't make this stuff up.

Zuhlsdorf is not alone. Indeed, while Zuhlsdorf is an eccentric with no real consequences, Tim Busch, having bought Catholic University, is now setting his sights on buying the whole church. That is what I make of his "authentic reform" conference today in Washington. He issued this manifesto in advance of the meeting. Taken as a whole, this essay seems like something I might have written as a sophomore — in high school. I note in passing that he mentions the McCarrick scandal and the Viganò testimony but oddly fails to note the Pennsylvania grand jury report, which is what really got people angry, or at least that is what angered those of us who actually care about clergy sex abuse instead of those who care about attacking Pope Francis. I also note his offensive reference to Martin Luther as "a corrupt cleric." I am no fan of Luther, but he was the outstanding theologian of his generation, and, in the spirit of ecumenical respect for which the Second Vatican Council called, I would not refer to him this way. Busch is a fraud. Bishops who align themselves with his faux-reform effort should be ashamed of themselves.

This is strange. On "The Week in Review," a TV round-up show with Chicago reporters, they discussed the burning of the rainbow flag by Fr. Paul Kalchik and the subsequent decision by Cardinal Blase Cupich to suspend the priest (discussion of the church starts at 17:59 in the video). One of the panelists, Lester Munson, identified as a freelance sports journalist, suddenly puts on his theological cap and opines that perhaps the burning of the flag was okay because it was sacrilegious: There was a cross on the banner also. Has Munson looked at the flag of the United Kingdom? A series of intersecting crosses. People put the cross on lots of things. But mixed with a sign of gay pride, then it is sacrilege according to the sports pundit. But, why does Mary Ann Ahern, who covers religion for Channel 5, respond to Munson's stupidity by saying "correct." Was she affirming the mere factual claim that the cross was intertwined with the rainbow flag? Or does Ahern share this soft bigotry? The priest in question also did an interview with Michael Voris on Church Militant last week. Why would a serious reporter like Ahern cite reporting from someone so obviously unserious as Voris, to say nothing of the fact he is a one-man-walking hate group or, in this instance, a self-hate group.

Elizabeth Foss is a columnist for the Arlington Catholic Herald. I think she is also a racist. How else to explain this tweet in which she confronts a comment about divorcing Republican husbands with a reference to "my white, well-educated sons." The tweet to which she was responding did not mention race. Why did Foss? Does she think that being white is great in the same way that being well-educated is great? And, is it not a part of being well-educated to be educated in morals and know that racism is, to use a category I do not much like but I suspect Foss likes a lot, an intrinsic evil?

While the nation was transfixed by the Senate hearings on the Kavanaugh nomination, the GOP-led House passed an additional $3.8 trillion in tax cuts. This will never pass the Senate — well, never say never with Mitch "Machiavelli" McConnell. But, if you had any doubts about the sanity of Paul Ryan and his crew, you can put those doubts to rest. He is as nutz as the rest of them.

At Civilta Cattolica, Jesuit Fr. Antonio Spadaro looks at the recent agreement between the Vatican and the People's Republic of China. He argues, in essence, that the Vatican is trying to shed the zero-sum approach to problems that characterized the Cold War mentality, better to say the Cold War mentality in Moscow and Washington and their allied capitals. For the many of the world's poor, the Cold War was a distraction, a redirection of resources away from development. I am a Pole, so I know that the Cold War was also more than that. But it is refreshing to see that that Holy See under Francis does not feel obliged to adopt the myopia of us Americans.