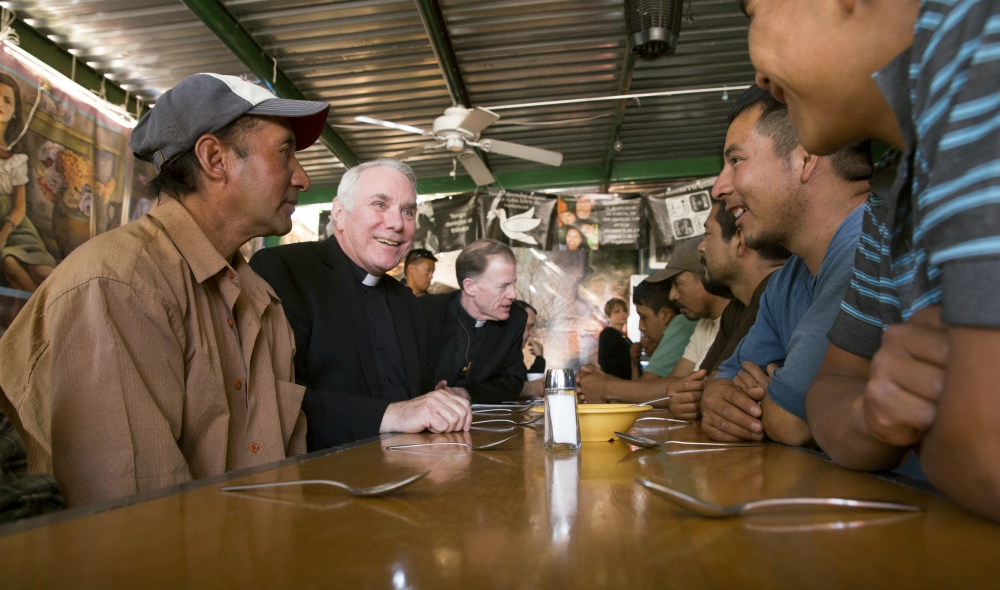 Fr. Clete Kiley (second from left), along with Salt Lake City Bishop John Wester, talks with men at the Aid Center for Deported Migrants in Nogales, Mexico, in 2014. (CNS/Nancy Wiechec)

From Catholic News Service, Wallice de la Vega on the linkages between poverty and death in hurricane-ravaged Puerto Rico. A fine look into the "culture of indifference" about poverty that plagues us all.

At The Washington Post, the fact checkers examine the charges coming from the White House and Fox News (is there any need to distinguish the two?) that the real scandal has nothing to do with any collusion between Donald Trump's campaign and Russian government officials, but instead with the Clinton campaign's funding of opposition research and a prior deal on uranium when Hillary Clinton was secretary of state. Sometimes, when there is smoke, it is just smoke.

Speaking of collusion, at Vox, Ezra Klein asks how one can examine the materials released by the Mueller investigation and reasonably conclude that there was no collusion. Klein, one of the sharpest journalists around, makes a compelling case.

At the website of UNITE HERE, the union that represents many hotel and culinary workers, they have a series of useful links for information regarding immigration, such as knowing your rights and how to apply for citizenship.

The union's director of immigration policy is everyone's favorite labor priest, Fr. Clete Kiley, who recently made the front page of the Chicago Sun-Times after he visited workers at the Mandalay Bay Hotel in Las Vegas, site of the mass shooting last month.

At the Working Class Perspectives blog, Sherry Linkon and John Russo on the lingering effects of the plant closings in Northeast Ohio's Mahoning Valley, starting with the 1977 closing of the Youngstown Sheet and Tube plant. The money quote:

The politics of resentment were also fueled by a parade of presidential candidates, each promising to address the problems caused by economic restructuring, and each failing to do so. The most infamous of those was Bill Clinton, whose support of NAFTA, the war on drugs, and welfare reform still generates resentment from voters in this area. As Hillary Clinton learned last year, deindustrialized communities have long memories.