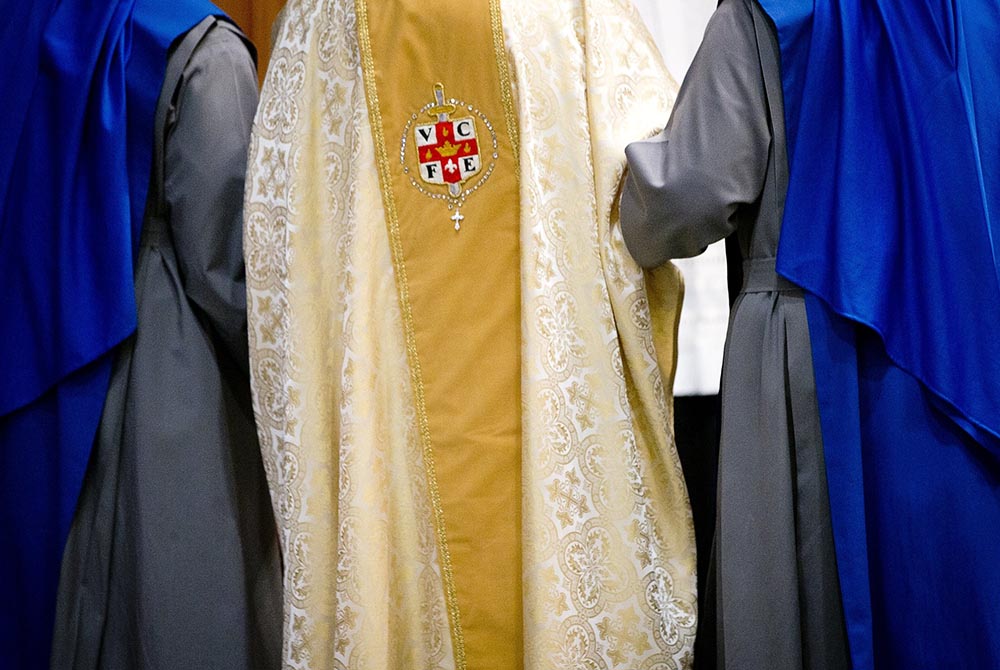 Sisters of the Servants of the Lord and the Virgin of Matara help then-Cardinal Theodore McCarrick walk through Holy Comforter-St. Cyprian Catholic Church in Washington after the ceremony for their profession of vows Nov. 1, 2017, in Washington. (CNS/Tyler Orsburn)

The release of the McCarrick report certainly has exposed the degree to which some members of the Catholic press have all the credibility of a Fox News primetime show. Most egregious was George Weigel's column at First Things. He seeks to exonerate his hero John Paul II, who was duped by former Cardinal Theodore McCarrick. "And while the report does not identify any smoking gun, it does outline in numbing detail a pattern of institutional systems failure in the leadership of the Catholic Church, in America and in Rome," he writes. And who was responsible for leading that system that failed? And when the system did not propose McCarrick for Washington, which pope insisted his name be considered? And why? There were alternatives. What happened that convinced John Paul II to promote someone with so much smoke surrounding him when there were other candidates?

Weigel told CNA that misjudgments by Pope John Paul II need to be seen in the context of all the people McCarrick was able to deceive about his true nature, over a period of years.

"McCarrick lied to and fooled much of the U.S. episcopate," said Weigel.

Yet "much of the U.S. episcopate," "many lay Catholics," and "many on the Catholic left," never received a letter from Cardinal John O'Connor raising the allegations against McCarrick. John Paul II did. No one but John Paul II had the authority to order an investigation into McCarrick. And the pope knew McCarrick had shared a bed with seminarians because McCarrick admitted it. Wasn't that enough to keep him from being promoted?

The Catholic News Agency also ran an article by Hannah Brockhaus that places the blame on the three New Jersey bishops who gave false or inadequate information to the Vatican nuncio regarding McCarrick. Those bishops certainly deserve blame, but so does the Vatican for thinking that was how you conduct an investigation. Asking three of McCarrick's proteges to confirm or deny the rumors of sexual misconduct by their mentor is a bit like asking Don Jr. and Ivanka what they think of their dad's handling of COVID-19.

At LifeSiteNews, Archbishop Carlo Maria Viganò, the disgraced former nuncio, has published a deranged reply to the report. Vigano's putsch attempt against Pope Francis in 2018 centered on wild allegations regarding McCarrick, many of which have been proven to be false. For example, footnote 1302 debunks the idea that McCarrick was some kind of kingmaker in retirement: There is no record of him urging the promotion of Cardinal Joseph Tobin to Newark, as Viganò suggested.

Turning to politics, The New York Times reports on election officials stating clearly that there is no evidence of election fraud despite the president's tweets to the contrary and the barrage of emails asking for money to support his legal challenges that flood my email box. The Washington Post reports that if you read the fine print, the money raised actually goes in large part to a PAC Trump has set up for his future political activity. But, my absolute favorite item on this subject comes from Fox News of all places, when host Sandra Smith does not realize her mic is still on and, after listening to a Trump campaign spokesperson spread nonsense about the results, she reminds host Trace Gallagher that they have called the race. More than her words, it is Smith's expression that really takes your breath away.