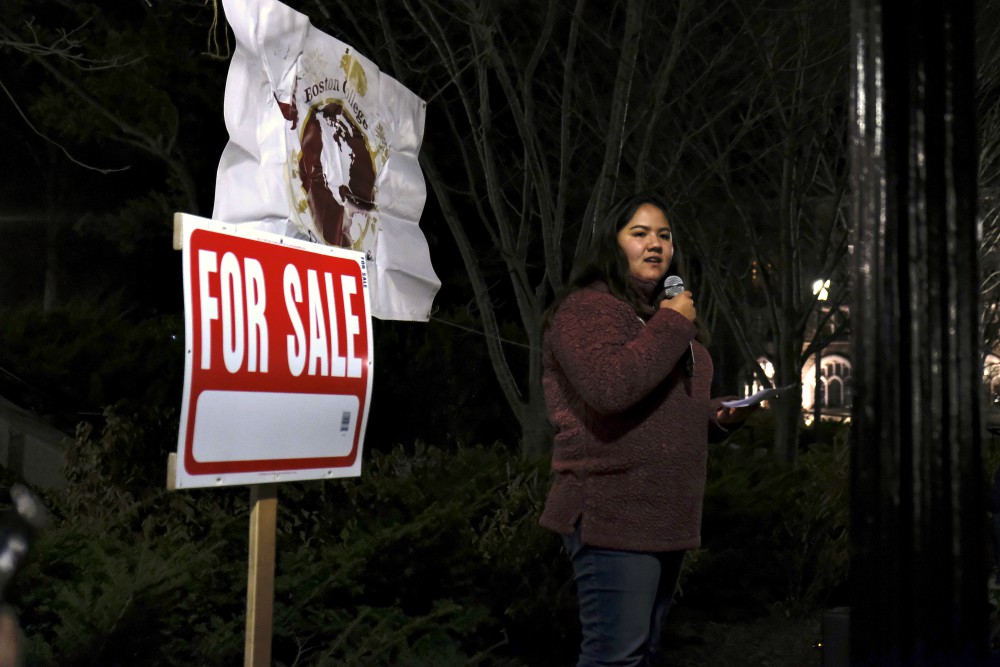 Audrey Kang, a Boston College student, speaks at a rally that was organized Nov. 14 by Climate Justice for Boston College and other campus groups against the college administration's acceptance of Koch Foundation funding. (RNS/Aysha Khan)

At Religion News Service, Aysha Khan reports on the Boston College student protests against taking any money from the Koch brothers. As regular readers know, I am not one for political correctness. And, in these situations, I am inclined to say what the Rev. Jerry Falwell said when it was discovered he was taking money from the Moonies: "The devil's had it long enough." But the Koch brothers not only stand for everything Catholic social teaching is against, they have used their money to cause real harm to the country, weakening unions, making it harder for minorities to vote, etc. I support the students: Koch money has no place on a Catholic campus.

Speaking of political correctness, a poll done by Mario Carrasco of ThinkNow research, a progressive-leaning firm, shows that 98% of Latinos do not like the neologism "Latinx." Read that again: 98%. If Democrats lose in 2020 it will not be because of their progressive economic agenda, which, as I indicated yesterday, is wildly popular. It will be because they indulge stupidities forged in the academy like this.

Speaking of stupidity by Democrats, the Democratic Attorneys General Association has announced a new litmus test: It will only offer financial support to candidates who publicly endorse abortion rights. The New York Times has the story. To announce this within a week of Gov. John Bel Edwards' win in Louisiana shows the craven way Democratic Party politics caves to the abortion lobby and makes a whole lot of people feel unwelcome. It is no way to win an election.

Lucky for us, stupidity is a thoroughly bipartisan phenomenon. At National Review, Kevin Williamson attacks Sen. Marco Rubio for his recent address at the Catholic University of America. Mind, the address had its problems, as Stephen Schneck pointed out here at NCR. But Williamson's inclusion of this line tells us all we need to know about his Catholic cafeteria: "Pope Francis would do mortal harm to the poor of this world if he had any real political power; blessedly, Providence has relieved him and us of that burden." Wow.

In The Washington Post, Christine Emba looks at the critics of Trump from the right. They recently heckled Donald Trump Jr. at an event at UCLA. They are beyond crazy, of course, but they could be a gift if Trump is smart enough to tackle them as profoundly un-American. Let me add: Emba has emerged as one of the foremost opinion writers in the country and I think both her balance and her capacity for trenchant criticism are rooted in her Catholicism.

At Politico, an early look at which states are likely to be battlegrounds. The map has expanded, in part because of the states President Donald Trump surprisingly flipped, like Wisconsin, but also because of states like Arizona where Democrats have been doing better and better. It is healthy for democracy that there be more swing states. That said, and mindful that there are simply so many things we do not know yet — like, will the president be impeached? — I still think this election is shaping up like the 1980 race. President Jimmy Carter and Gov. Ronald Reagan were virtually tied going into the last weekend, with 10% undecided. On Saturday, half of the undecided broke, all for Reagan. Sunday night's tracking polls indicated the other had broken, all for Reagan, and he won in a landslide. Come next October, I suspect those people who are undecided will be undecided for the same reasons and will likely break one way or the other. It is just a hunch, but it corresponds to the conversations I am having with people who are not solidly partisan.