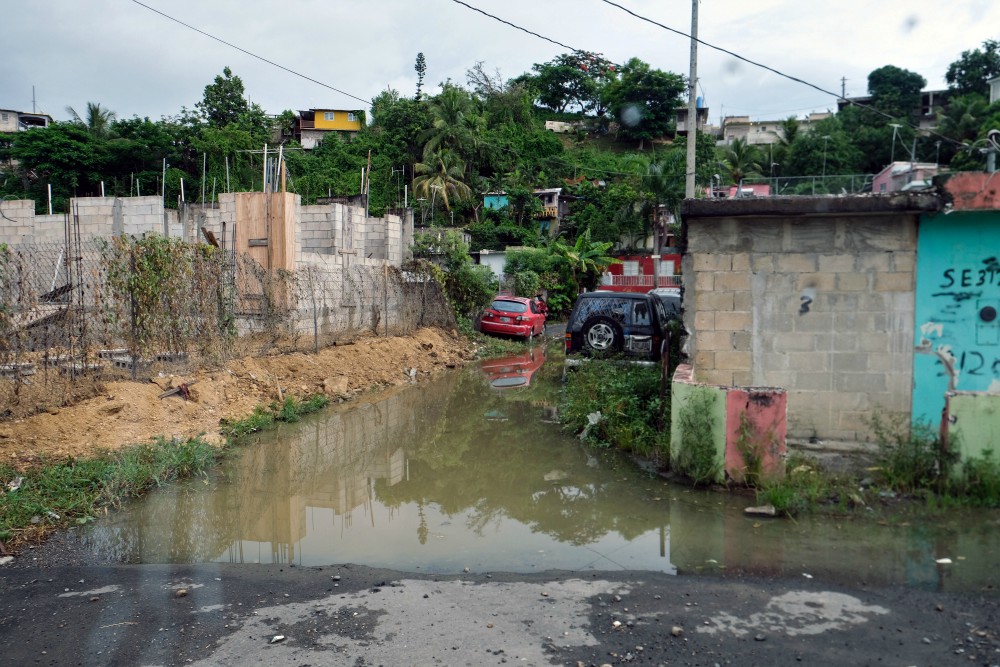 From our friends at Jubilee USA Network, only some 190 rebuilding projects in Puerto Rico — out of the 9,000 projects that applied — have received support from the Federal Emergency Management Agency, two years after the hurricanes. By comparison, 3,700 projects in Texas and another 3,700 in Florida have gotten their FEMA aid. I wonder if Hunter Biden is involved? I hope all the Puerto Ricans who have relocated to the States, especially those along the I-4 corridor in Florida, will be sure to register and vote next year.

In The New York Times, Brazilian President Jair Bolsonaro has blamed actor Leonardo DiCaprio for causing the wildfires in the Amazon. I like the fact that the Times used the adverb "falsely" to modify the allegation. I do not like the fact that our president has provided the world with a model of deceit or, as Stephen Colbert frames it, a heresy against reality.

Also in the Times, a fine essay on why progressive candidates should invoke conservative values. The writers' premise is missing a key distinction that seems to be missing everywhere this year: When we say progressive or conservative, do we mean in economic matters or in social ones? The reduction to utilitarianism — because it works — is not the best reason. The best reason is because many conservative values are true and beautiful, and in the era of Trump, they are also up for grabs. Still, a smart reminder of the limits of woke culture. It pairs nicely with this story in the Times about the increasingly extreme positions on abortion being staked out by the Democratic candidates. Normally, I would merely point out that even a bit of moderation on the issue would serve a Democratic candidate well, but in light of the Supreme Court's decision to take a case that could restrict abortion rights, I am not sure how it will play in next year's election.

It is obvious that Michael Bloomberg's and Deval Patrick's candidacies came about because wealthy Democratic donors are worried that Sen. Bernie Sanders or Sen. Elizabeth Warren might win. Articles like this at Politico come about from the same fear, reinforced by the identity politics of the liberal academy that has shaped many of the people who run campaigns. Instead of focusing on a commitment to restructuring the economy, the people speaking to these reporters want to focus on race and identity. Surprise — the campaign flaks for Sen. Cory Booker and Sen. Kamala Harris are leading the argument. I just can't believe the reporters fell for it. More on this in the weeks ahead.

Also at Politico, an examination of Washington state's enactment of a health care "public option," or "Medicare for all who want it," as Mayor Pete Buttigieg calls it. Guess what: This "moderate" plan invites all sorts of shenanigans from the health care industry. The core problem:

That points to a key takeaway from Washington's public option ordeal: Any real effort to impose a cost-containment mechanism, which is essential for any reform aimed at skyrocketing prices, will meet deep and potentially fatal resistance from the health care industry.

The goal of health care reform is not only to cover everyone, but to lower costs because Americans pay too much for their health care. But the health insurance industry, and other health care sector businesses, like those higher costs. I fear we will only get reform in the wake of some kind of crisis.

At Commonweal, Paul Baumann takes a whack at Attorney General Bill Barr's speech at University of Notre Dame and finds it filled with a typically American Pelagianism. Baumann is exactly right. Back in 1993, I was invited to write a review for The New Republic of a new biography of Josemaría Escrivá, the founder of Opus Dei, to which Barr has strong ties if not being actually some kind of member. I told the literary editor, Leon Wieseltier, that Opus Dei had been accused of everything from real estate fraud to murder, but I would want to accuse them of the one thing they had never been accused of, heresy, specifically Pelagianism. Opus Dei promotes, and Barr applauds, a highly individualistic checklist spirituality — do these five things every day and you will be a saint. That's Pelagianism.

Also at Commonweal, Cathleen Kaveny hits another walk-off home run. Her comments will be familiar to anyone who read her splendid book Prophecy without Contempt. The core of the argument here is:

Lastly, and along the lines of my review of Steven Waldman's book on religious liberty, which I began and will conclude tomorrow, America magazine has an article by Terry Golway about Al Smith that rightly commends the Happy Warrior for attempting to break the glass ceiling for Catholic presidential candidates. But the article suffers from a particular error and a larger, outrageous omission. Golway begins his article with a factual error: "In the spring of 1927, as the nation prepared for the following year's presidential campaign, a leading contender for the Democratic Party's nomination was confronted with a question that had not been asked of any other major U.S. politician. Should the candidate's religious affiliation bar him from serving in the nation's highest elective office?" Actually, in 1800, the Federalists accused Thomas Jefferson of being unfit for the presidency because of his Deistic beliefs. The larger problem is that in comparing Smith's article in The Atlantic on Catholics serving in public life, and Mario Cuomo's 1984 speech on the same issue, Golway nowhere mentions the Second Vatican Council and its decree on religious liberty. How is such an omission possible?