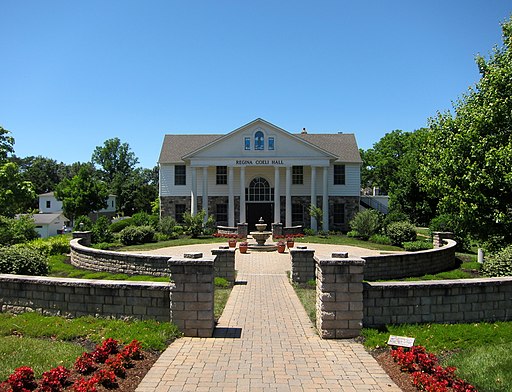 Regina Coeli Hall at Christendom College in Front Royal, Virginia. In a new essay, Avellina Balestri explores the danger of the "us vs. them" education at niche colleges like Christendom. (Wikimedia Commons)

A reader liked my essay on Monday, pushing back against the rush to place an ideological interpretation on the fire that consumed the roof and spire of Notre Dame de Paris. He wrote:

Your essay reminds me of the old joke about the various nationalities/religions asked to describe an elephant.

The Spaniard: Honor among elephants.

The Jew: The elephant and the Jewish problem.

The Catholic: The elephant's spirituality.

The Baptist: The challenge of total immersion for elephants.

This was one old joke I did not know, but I think it is hilarious.

From the Center on Budget and Policy Priorities, Judith Solomon looks at the pressing need for federal monies to bolster the Medicaid program in Puerto Rico. Almost half of the population on the island relies on Medicaid, yet it is hugely different from, and receives less federal funding than, Medicaid as it exists in the States. And, due to the still unresolved debt crisis, the local government cannot afford more generous policies. These are U.S. citizens who are being denied even the most basic health care access. It needs to stop.

At Notre Dame's Church Life Journal, Robert Christian has the second part of his essay on combating polarization in the church. He rightly recognizes that much of the polarization flows into ecclesial life from our highly polarized political culture, and Catholics on both the left and the right look for proof texts in Scripture or papal teaching to bolster their political positions. He also correctly sees the preeminent threat to Catholicism posed by the rise of the Alt-Catholics like Steve Bannon and his ilk:

A failure to arrest rising Alt-Catholicism would make Catholic polarization far worse — creating new obstacles to communion, jeopardizing souls, pulling the American Church away from the global Church, and badly damaging Christian witness. It is perhaps the gravest threat to Catholicism in the United States.

Robert Christian, who edits the online journal Millennial, has made a significant contribution to the discussion about polarization. I have attended two multi-day academic conferences on the subject, and he packed more sound advice and analysis into these two essays than I garnered from either of those conferences.

At Politico, former Sen. Bob Corker says he thinks it would be "good for the country" if a fellow Republican challenged Trump in the primaries. I agree. The only three incumbents in my lifetime who withdrew or lost all faced a primary challenger: Lyndon Johnson, Gerald Ford, Jimmy Carter and George H.W. Bush. It would also be god for the GOP, which will need a de Gaulle-like figure to help them rise from the ashes.

At the New York Times, Nicholas Kristof interviews Serene Jones, president of Union Theological Seminary, and she explains that her faith is not dependent on any claim that Jesus rose from the dead bodily at Easter. At America, Jesuit Fr. Jim Martin defends the Nicene and Gospel faith in a literal resurrection. I am reminded of Msgr. Lorenzo Albacete's observation that seeing the resurrection as a metaphor is certainly modern, and it makes a stab at intellectual seriousness, but it is also very strange. None of us really experiences our body as a metaphor. Why would we think the Gospel authors did?

At Wisdom Daily, Avellina Balestri talks about how she seemed destined to attend Christendom College in the home schooling culture in which she was reared. She goes on to explain the difficulties of these bastions of "authentic Catholic culture" and whether the whole "us vs. them" approach is not at odds with the most basic human dispositions the Gospel proposes. A splendid essay that goes a long way towards explaining the dysfunctional quality of the U.S. Church.

Bishop Joseph Bambera, like all the bishops in Pennsylvania, had a rough year as gruesome details emerged about his predecessors in Scranton and throughout the Commonwealth. Now the diocese of Pennsylvania faces a federal probe as well. What to say to your priests at the Chrism Mass? Bishop Bambera's sermon is profound and beautiful.