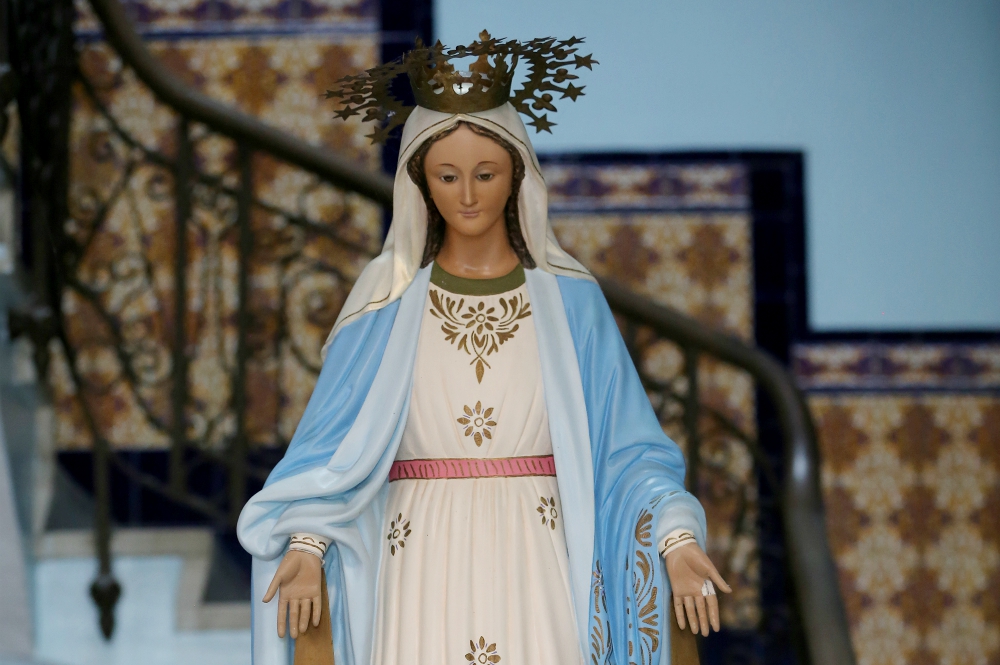 A statue of Mary is seen in the hallway at Mutual Help Catholic Hospital in San Juan, Puerto Rico, Oct. 25, 2017, more than one month after Hurricane Maria devastated the island. (CNS/Bob Roller)

According to a new study by The New England Journal of Medicine, the official death count in Puerto Rico from Hurricane Maria, which stands at 64, is a tad low. "Our estimate of 4645 excess deaths from September 20 through December 31, 2017, is likely to be conservative since subsequent adjustments for survivor bias and household-size distributions increase this estimate to more than 5000," the study indicates. This is shocking and the outrage should be loud. Unfortunately, the unsurprising additional evidence that Roseanne Barr is a racist tops the news for the 24 hours after the release of this study.

According to a report in Politico, you do not need to go all the way to Puerto Rico to find how our nation has failed to help people recover from last year's hurricane season. In Houston, the wealthy and middle-class neighborhoods have returned to normal, but in the poor neighborhoods of the city, misery still reigns.

As we get ready for the Supreme Court decision in the case Janus v. AFSCME, Council 31, the AFL-CIO has launched a new website about the importance of joining a union. I can't think of a single thing that people can do to counteract the negative sociological trends discussed yesterday (and tomorrow) than to support efforts to organize workers. Let's hope the chief justice sees it that way, too.

Rod Dreher is one of a shrinking number of conservatives with a conscience. And he is rightly horrified that the Trump administration has lost track of 1,475 immigrant children. This comes on top of the administration trying to intimidate parents by threatening to separate them from their children.

On Tuesday, I complained about conservatives attacking Pope Francis for telling a gay man that God loved him as he made him. I am delighted to see that Cardinal Timothy Dolan agreed with the Holy Father and said, "Jesus would have said that, and so would I. That's conservative, traditional, Catholic, orthodox teaching." But the headline writers at the Catholic News Agency just can't bring themselves to focus on that, so instead note that the cardinal called the pope's words "beautiful" (you know, the way a model can be beautiful but not very bright) and "could require clarification."

As noted yesterday, the editorial board at the Chicago Tribune may have their head in the libertarian sand when it comes to economics, but Ted Gregory's profile of Sr. Jean Dolores Schmidt, still basking in the spotlight from her time cheering the Loyola men's basketball team into the Final Four, balances the ledger. And Sister Jean is just such a breath of fresh air.

A friend told me he was attending the meeting of the conservative Academy of Catholic Theology and that the papers on this year's topic, eschatology, were among the best he had encountered in years. His email arrived just as the news broke that Donald Trump had called off his summit with North Korean leader Kim Jong Un, so I replied that the conference's choice of topic seemed exceedingly timely.

At Politico, John Lawrence overstates the role of the "Watergate Babies" in producing the dysfunction we find in Congress today: The reality is more complex. But he is right that the belief the Class of '74 had in the power of transparency was misplaced. Yes, there is something to be said for transacting public business in public. But there is also something to be said for the old smoke-filled backrooms where people were permitted to care about doing the right thing, and less accountable to the marauding influence of single-issue groups with lots of cash and a list of party activists willing to enforce ideological purity tests.

Monday was Memorial Day so this is the only Links column of the week. The History Channel, strangely, ran a World War II series on the holiday, although the Civil War series would have seemed more appropriate. And what is worse, although there are many archival clips of Britain's wartime Prime Minister Winston Churchill, they left out my favorite of his speeches, delivered to the House of Commons of Canada in which, among other things, he displayed his unmatched power of metaphor.