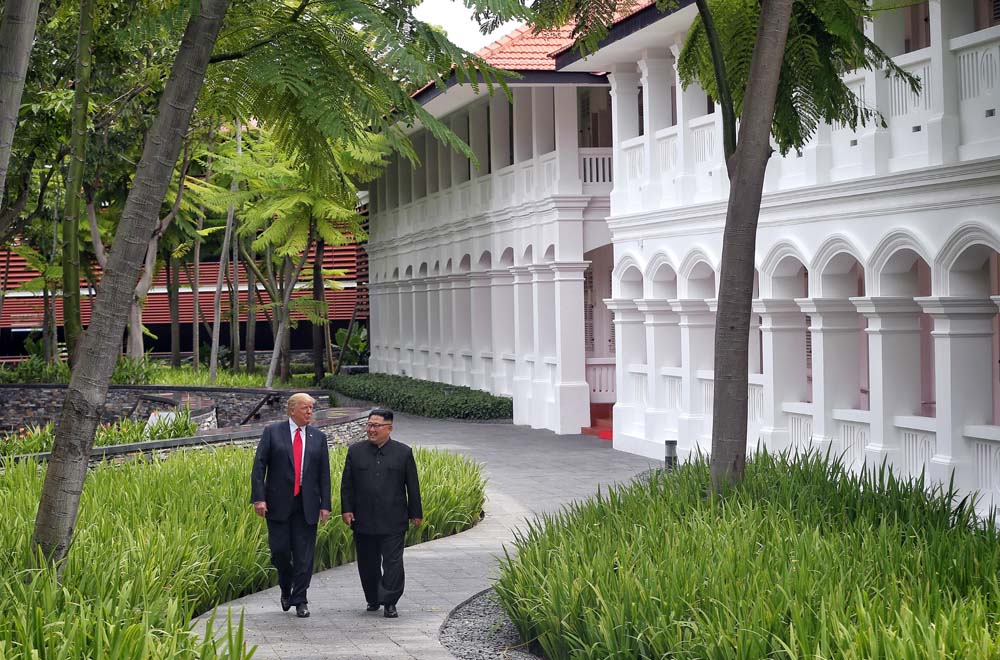 Mark Sanford, congressman and former governor of South Carolina, survived the weirdest public scandal in history, when he was so smitten with his mistress, he blew up his whole life and couldn't bring himself to say anything negative about her. But, the one thing he could not survive? Criticizing Donald Trump. This is the problem with demagogues: Once they get the microphone, it is hard to get it back.

The file marked "No, he didn't" for President Donald Trump was overflowing already. It is hard to be shocked anymore. But, when he said he told North Korean leader Kim Jong Un that his country could have "the best hotels in the world," well let's call it the Trump Doctrine.

The irrepressible Dana Milbank, at The Washington Post, on President Trump's mustering the guts to take on Canada. Milbank was made for the times in which we live and this is one of his best.

First it was the football champs, the Eagles, who were disinvited to the White House. Now it is the basketball champs, the Warriors. Sports was always one of the things that united people across different class and ideological lines. Racists cheered for black athletes. Poor folk celebrated their multi-millionaire sports heroes. Michael Jordan famously did not endorse Harvey Gantt over Jesse Helms, although there is controversy about whether he said the reason was that "Republicans buy sneakers, too." But, interject Trump and his penchant for division, and even sports is now something that divides us. Let's hope these superstars donate some of their earnings to Trump's early retirement.

A must-read from the New York Times, Lily Geismer and Matthew Lassiter argue that the Democrats' desire to win elections by turning affluent suburbs blue is self-defeating. This is music to my ears. The money quote:

To explain the realignment of American politics and the migration of working-class whites to the Republican Party, observers usually focus on how politicians from Richard Nixon to Donald Trump have exploited white backlash against racial and cultural liberalism.

The flip side of this is the deliberate, long-term strategy by the Democratic Party to favor the financial interests and social values of affluent white suburban families and high-tech corporations over the priorities of unions and the economic needs of middle-income and poor residents of all races.

At The Catholic Thing, Fr. Robert Imbelli reflects on the teaching of the Second Letter of Peter. I think if we read the summations of Pope Francis' daily sermons at the Domus Santae Martae, we see that Peter is still teaching this central truth, that our faith in Jesus Christ is the source of our ethical teachings, not the other way round.

Can you hear the heads exploding in certain conservative circles? Jesuit Fr. Jim Martin will be giving one of the talks at the World Meeting of Families in Ireland, and he will specifically be addressing LGBT issues. Martin is one of the kindest — and funniest — priests I know, and both attributes are a sign of divine favor. It is thrilling that the Vatican — unlike how many stateside church locales — will not let the bullies and the brainless intimidate them into uninviting Martin.