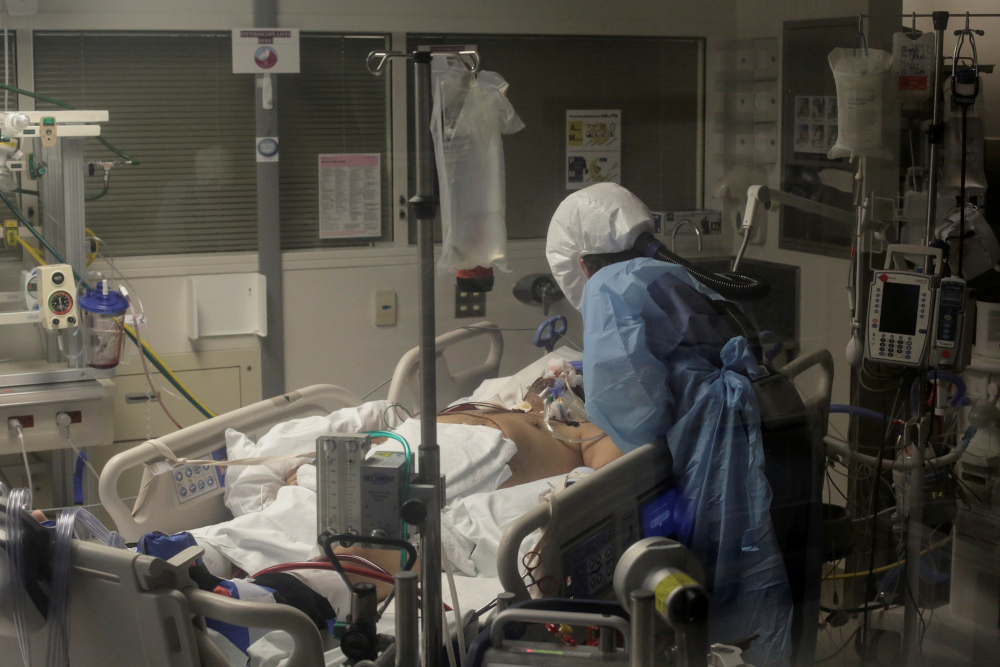 Nurse Leah Silver cares for a patient sick with the coronavirus in the COVID-19 ICU at the University of Washington Medical Center-Montlake April 24 in Seattle. (CNS/Reuters/David Ryder)

In Seattle, a man survived coronavirus and then got hit with a $1.1 million hospital bill. The bill ran to 181 pages. Can anyone remind me about how the market helps to drive down health care costs? Introduce rationality to the process?

St. Xavier University, the oldest Catholic college in Chicago, is using the pandemic to bust its union, with its recent announcement that the university will no longer recognize its longtime faculty union. To be sure, they have the legal right to do so, but as a Catholic university, they are supposed to follow church teaching, aren't they? The Sisters of Mercy are always quick with a statement about social justice. Why won't they practice it in their own backyard? I hope Chicago Cardinal Blase Cupich will have something to say about this unconscionable decision.

From Politico, an alternate view of how events are shaping the 2020 election: GOP operatives believe the pandemic is mostly in the rearview mirror and the economy is coming back, people are upbeat, and President Donald Trump is looking at a landslide reelection bid. But, also at Politico, a reminder that the virus does not care about our lockdown fatigue. As I noted last month, the president has bet the farm on reopening the economy, no matter what happens with the pandemic. If Americans really are so morally callous that an ever-increasing death toll of mostly older people is acceptable in exchange for being able to return to the beach or the casino, Trump can have America.

In The Washington Post, E.J. Dionne nicely draws out the political imperative for former Vice President Joe Biden from the current moment of social ferment and demands for racial justice:

Precisely because Biden is widely seen as a traditional figure of restoration, he has been given a historic opportunity to argue that restoration demands change. To become "who we think we are," Americans must break decisively not only with the Trumpian present but also with the long history of reaction the president represents.

This election is not about overturning the last four years, so much as the last 40 years of political reaction. And, to do it without alienating middle America, which has never been more ready to embrace change.

Relatedly, it turns out that all demographics of Americans, be they divided by age or race, think political correctness is a problem, according to a study and article from a couple years back at the Atlantic. Interestingly, divides by wealth and education show the greatest divergences:

I seem to recall that Jesus of Nazareth announced his Gospel was good news to the poor, not to those making more than $100,000 and possessing a postgraduate degree. I hope that Team Biden reads this report and tells its entire staff to stop looking at Twitter where the politically correct seem to rule supreme. The rest of us are exhausted with the culture wars.

Relatedly, at New York Magazine's Intelligencer, Jonathan Chait looks at the illiberalism of the left, as witnessed in The New York Times kerfuffle, a subject I touched on last week. His other example is even more clear-cut and chilling. Chait explicitly states that the right is a greater danger to small-l liberalism than these illiberal habits found on the far left, and that he used to agree that the threats from the left were so small they were best ignored. Now, they are harder to ignore. His money quote:

One universal fact of political life is that people tend not to enjoy highlighting faults committed by their own side, and often respond to others bringing up behavior they don't want to defend outright by deflecting blame. Conservatives are united less by a zeal to affirm every one of Donald Trump's actions than a reluctance to denounce them. Likewise, while few leftists go so far as to explicitly advocate violent or destructive acts, refraining from criticism of violent protests is, among parts of the far left, almost a social norm.

Read the whole column. Chait is the kind of liberal I most admire, someone committed to his principles even when they sometimes yield a result he might not like.