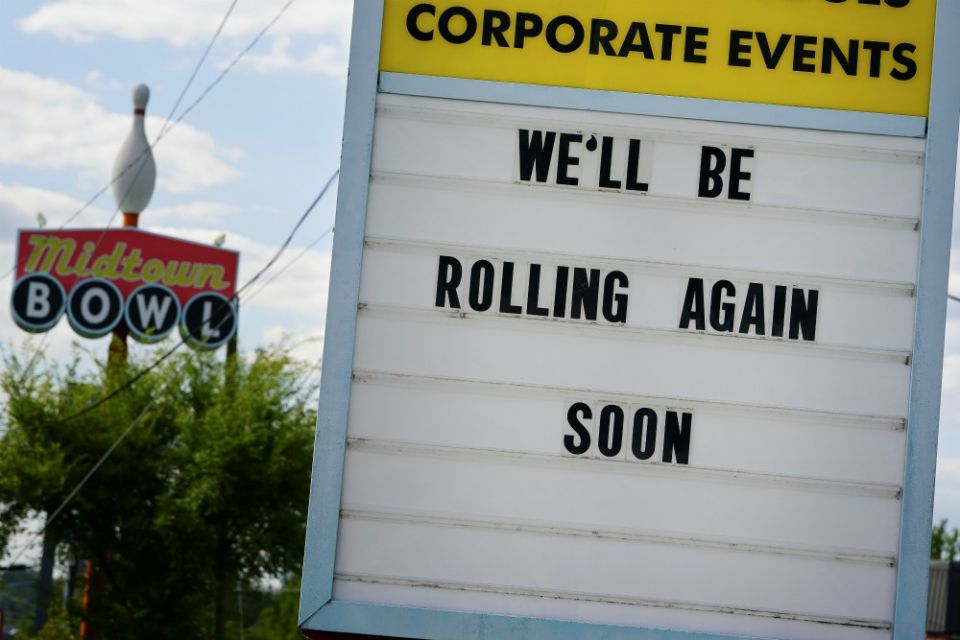 A message in Atlanta is seen on a sign outside the Midtown Bowl bowling alley April 21 days before the phased reopening of businesses and restaurants from coronavirus disease restrictions. (CNS/Reuters/Elijah Nouvelage)

If Democrats were paying attention, you would see them shaking in their boots the past few days. CNN conducted a presidential preference poll and the news report led with this sentence: "Presumptive Democratic nominee Joe Biden's lead over President Donald Trump now stands at five points, but Trump has an edge in the critical battleground states that could decide the electoral college, according to a new CNN poll conducted by SSRS."

That's right: Trump is winning by seven points in the key battleground states. In the middle of a pandemic. With record high unemployment. After weeks of nightly press conferences that were so bad even his own team made him stop. The 3.7 +/- percent margin of error is cold comfort.

What is more, all the usual assumptions about how a campaign unfolds might not matter. In the first place, there is the issue of digital campaigning. My ecclesiological concerns notwithstanding, the Trump campaign and its allies are relying on digital technology to identify people who have never voted before but who, based on other characteristics — regular church attendance, a preference for NASCAR over "Nabucco," recent purchases of hunting gear, etc. — would be likely to support the president. Heidi Schlumpf detailed the efforts of a conservative Catholic group to use "geofencing" to identify regular churchgoers who were not registered.

In The New York Times, op-ed writer Thomas B. Edsall commented on Schlumpf's reporting and concluded:

With increasing speed, digital technology is transforming politics, constantly providing novel ways to target specific individuals, to get the unregistered registered, to turn out marginal voters, to persuade the undecided and to suppress support for the opposition.

Democrats and Republicans agree that the Trump campaign is far ahead of the Democratic Party in the use of this technology, capitalizing on its substantial investment during the 2016 election and benefiting from an uninterrupted high-tech drive since then.

The real secret of digital campaigning is that the political message is delivered by someone the recipient trusts for other reasons. The website the individual goes to for information about race cars or hunting gear is where they find the message about the campaign. People can sniff a campaign ad on television a mile away, but this can be more subtle and the target has already placed him- or herself at an internet location they like. Their guard is down. They are receptive.

As late as last month, Politico reported that an internal rift had kept the Biden team from deciding how to mount a digital campaign. With six months to go, they could not even agree how to proceed!

All the while, Team Trump is out on the digital airwaves, now defining Biden as a stooge to China just as GOP operatives defined John Kerry as unpatriotic who fibbed about his heroism in Vietnam. It was a lie, but it worked. And the attacks on Biden are being delivered digitally, not only on the six o'clock TV news. The campaign could already be over and it hasn't even begun.

That said, this huge advantage in digitation also might not make any difference whatsoever. The Republican Party, loyal to the president at all costs, has decided to place the largest bet in American history. They are the party that is all-in for reopening the economy now. After two months of lockdown, when declining rates of infection pointed to a future in which the pandemic might be controllable, they are willing to risk all that has been achieved by prematurely reopening the economy.

Among their chips is one marked "election results" and another is labeled "control of the Senate." But the chips that count the most are those labeled "thousands of American lives."

If you had not watched any television or read any newspapers — and many of those who do not usually vote, or who count as swing voters, are low-information voters — you could be forgiven for thinking that the situation in New York and that in Georgia are comparable: Both states are beginning to reopen. Signs of renewed economic activity and the hope such activity brings are evident.

The difference, however, is real: New York is on the downside of a curve and Georgia is still at that point where the curve flattens, but it has not really begun to decline. Most of the "hot spots" are in rural parts of the country and in red states. And the virus does not respond to swagger from the presidential podium.

No one knows how this will play out. Different models yield different results and each individual model changes with each day of new information. We all hope to God the advent of summer, with its longer and warmer days, will help restrict the contagion. But everyone knows that if, in a week's time or a month's time or at summer's end, the virus returns and there are not enough masks to go around and not enough tests to go around and no one has been prepared for the intrusive but essential contact tracing, tens of thousands of people will die, and they will die unnecessarily.

No one blames Trump for the virus. The fact that he was asleep at the wheel throughout February and early March, resulting in more cases and more deaths, has not caused his poll numbers to tank. But if he finds himself defending the proposition that tens of thousands of deaths are simply the price of doing business, well, even the most sophisticated digital campaign in the world may not prove sufficient to earn him a second term.

Column | Why this year's presidential campaign may already be over

Reclaiming the Catholic moral and intellectual tradition from the culture wars