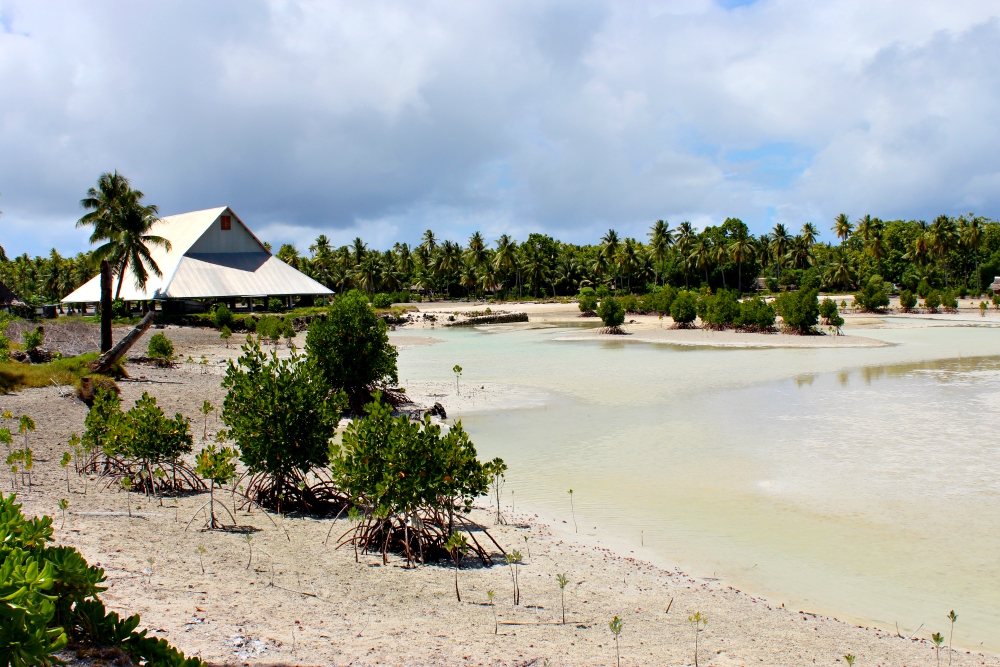 A view of Abaiang, a coral atoll in the nation of Kiribati that is threatened by climate change (Wikimedia Commons/Department of Foreign Affairs and Trade/AusAID)

More evidence that Trumpism is taking over not just the Republican Party but the conservative movement: The Federalist has a review of a book that argues Europe is dying (it isn't), on account of immigration from Muslim majority countries (as opposed to immigration by white Vikings in earlier times), and on account of intellectual patterns that fail to acknowledge and defend tribal identities (yes, nationalism got bloodied during World War II). One review of one book does not amount to a hill of beans, but I fear that an editorial decision to include this nonsense is a disturbing sign that The Federalist, which I have long disagreed with on other grounds, is caving to the Bannonite vision. It is a thing to regret. And to fear. We knew the Federalist Society could be creepy, influencing hiring at George Mason University's Scalia Law School. Now, the magazine is flirting with white nationalism.

At National Review, Kathryn Jean Lopez tries to link the anniversary of Humanae Vitae with the Theodore McCarrick scandal. The statement about McCarrick from Cardinal Daniel DiNardo, president of the U.S. bishops' conference, betrayed a similar lack of focus. He said, "Our Church is suffering from a crisis of sexual morality." Funny, I did not think Humanae Vitae mandated confidentiality agreements in legal settlements or the Vatican looking the other way when alerted to concerns about McCarrick.

EWTN broadcast a "Conversation With the Cardinals" this weekend, as the new Cathedral of the Most Sacred Heart of Jesus in Knoxville, Tennessee, hosted Cardinals Justin Rigali, William Levada and Stanislaw Dziwisz, as well as the papal nuncio, Archbishop Christophe Pierre, for a public conversation. I have a deep respect for Levada, and think our nuncio is doing a great job. Rigali ruined everything he touched. But why did an astute attorney general not issue a subpoena to Dziwisz and ask him what he knew about McCarrick — and much else?

Politico reports on the Democrats for Life of America conference last month and asks if there is still room for pro-lifers in the party. There is, but it is getting tougher and those of us who agree with the Second Vatican Council that abortion is an "unspeakable crime" need to face that it may not be possible to remain in the party of FDR and JFK much longer, even while the available alternate choice is even worse. It is time for a small third party, but our nation's first-past-the-pole election laws make it almost impossible for such a party to emerge.

At ABC7 in Chicago, Cardinal Blase Cupich discusses Pope Francis' change to the catechism on the death penalty, and other issues, including the ongoing violence in Chicago.

Yesterday, I noted some conservative complaints about the death penalty amendment to the catechism, but it is good to see that even conservative prelates are supporting the Holy Father's decision. I thought this statement from Archbishop José Gomez was especially good. How can groups like LifeSiteNews still object when even a conservative like Gomez is on board?

Speaking of conservatives who like having their heads in the sand, The Washington Post reports on a country, Kiribati, that is sinking under the weight of climate change and rising sea levels. Their present is Miami's future, and not just Miami but much of both seaboards. But the Koch Brothers and their allies, such as the pernicious Acton Institute and some of the staff at the Catholic University of America's Busch School of Economics, continue to deny climate change.

I am not a fan of Bill Maher, but last week he had historian Nancy MacLean, whose book Democracy in Chains remains important, even though it focuses on the influence of libertarians on politics, not the influence of Trump. Both influences are sinister (and on the show, columnist Charles Blow discusses them), and we can't let the immediacy of the threat posed by Trump cause us to forget the long-term threat posed by the Koch Brothers.