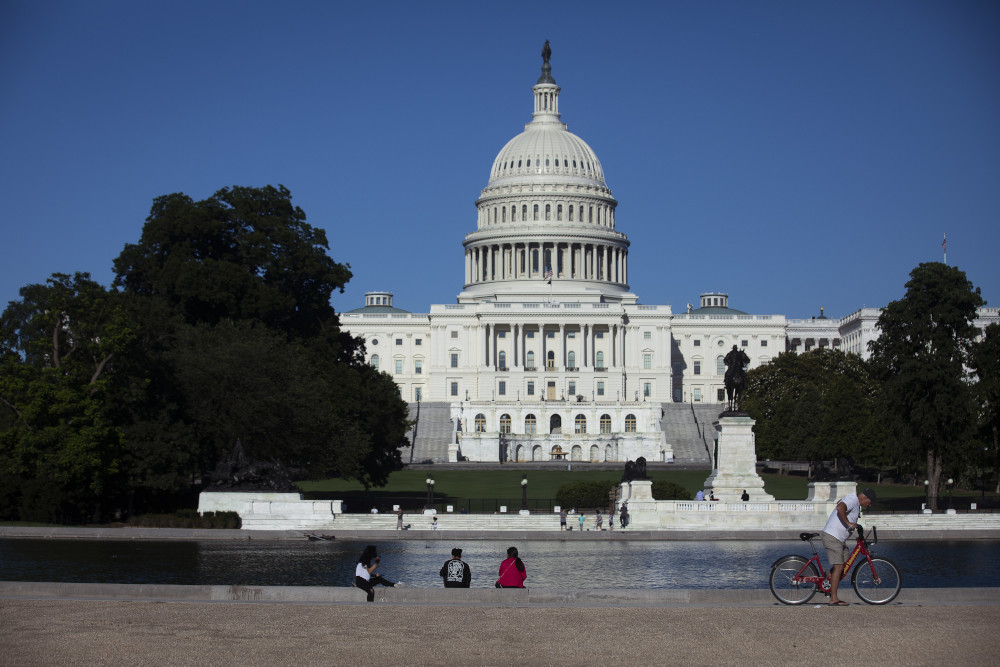 People are seen near the U.S. Capitol in Washington June 24. (CNS/Tyler Orsburn)

Keep an eye on Missouri if you want to see how strong former President Donald Trump's coattails are. Disgraced former Gov. Eric Greitens is running for the U.S. Senate. One of Trump's biggest donors is helping him out, as is Don Jr.'s girlfriend, Kimberly Guilfoyle, but some of his past financial backers are sitting the race out. He is up against two solidly mainstream Republicans. Greitens resigned after his hairstylist accused him of taking her to his basement, blindfolding her and forcing her to perform oral sex. Prosecutors also charged he had misused funds from a charity for veterans, but dropped the charges in exchange for his resigning as governor. If he can mount a comeback, Trump's coattails are stronger than we thought. Politico has the story.

In Oklahoma, Republican incumbent Sen. James Lankford should be cruising to reelection but the events of Jan. 6 are coming back to haunt him. Lankford was in the middle of his speech supporting the motion to question the electors from Arizona when the chair suspended debate. An aide went up to Lankford to explain that the building had been breached and there was a mob trying to enter the chamber. Later that night, he withdrew his objection to the Arizona electors and voted to confirm the election of Joe Biden. For this, according to The Hill, he is being challenged by a true Trumper and, in a remarkable turn of events, the chairman of the state GOP is backing the challenger!

Relatedly, at CNN, Simone Path looks at how the 2022 contest for control of the U.S. Senate is shaping up, and specifically, the top 10 states that might flip. Missouri is listed in 10th. Four Democratic incumbents made the list: Sen. Raphael Warnock in Georgia and Sen. Mark Kelly in Arizona won special elections in 2020 and will be running for a full-term in 2022. Sen. Maggie Hassan in New Hampshire and Sen. Catherine Cortez Masto of Nevada are only in danger if some popular Republicans decide to challenge them. The other six are all potential Democratic pickups.

In The New York Times, Gabriel Zucman and Gus Wezerek laud the agreement reached by 130 countries to set a floor for corporate tax rates at 15%, making it harder for multinational corporations to evade taxes by offshoring their profits. But how to redress the distortions in the relationship between our economies and our societies that have created the enormous income inequality we confront? And, are our memories so short that we forget the prosperity of the postwar era when corporate tax rates were around 50% or higher?

At The Atlantic, George Packer has an essay in which he dissects the "four Americas" that now define and animate our national life. Packer is devastating in his analysis. For example, here is his take on the "Smart America" narrative he rightly associates with both the Clintons and Barack Obama:

Under the watchful eye of their parents, the children of Smart America devote exhausting amounts of energy to extracurricular activities and carefully constructed personal essays that can navigate between boasting and humility. The goal of all this effort is a higher education that offers questionable learning, dubious fulfillment, likely indebtedness, but certain status. Graduation from an exclusive school marks the entry into a successful life. A rite endowed with so much importance and involving so little of real value resembles the brittle decadence of an aristocracy that's reached the stage when people begin to lose faith that it reflects the natural order of things. In our case, a system intended to expand equality has become an enforcer of inequality. Americans are now meritocrats by birth. We know this, but because it violates our fundamental beliefs, we go to a lot of trouble not to know it.

These are strong and difficult words, but can anyone doubt they are true? I will have more on this essay in the near future. It is a flawed but an important read.

OK, OK, I promise this will be my last video about the 15th anniversary of "The Devil Wears Prada," but this clip from "Live from E Rewind!" features the actors discussing their roles and Meryl Streep's comment about people in power is, in my humble opinion, the key to understanding why her portrayal of Miranda Priestly was so believable: Miranda did not like power for the sake of power so much as she had to confront her own disappointment that others did not work as hard as she.