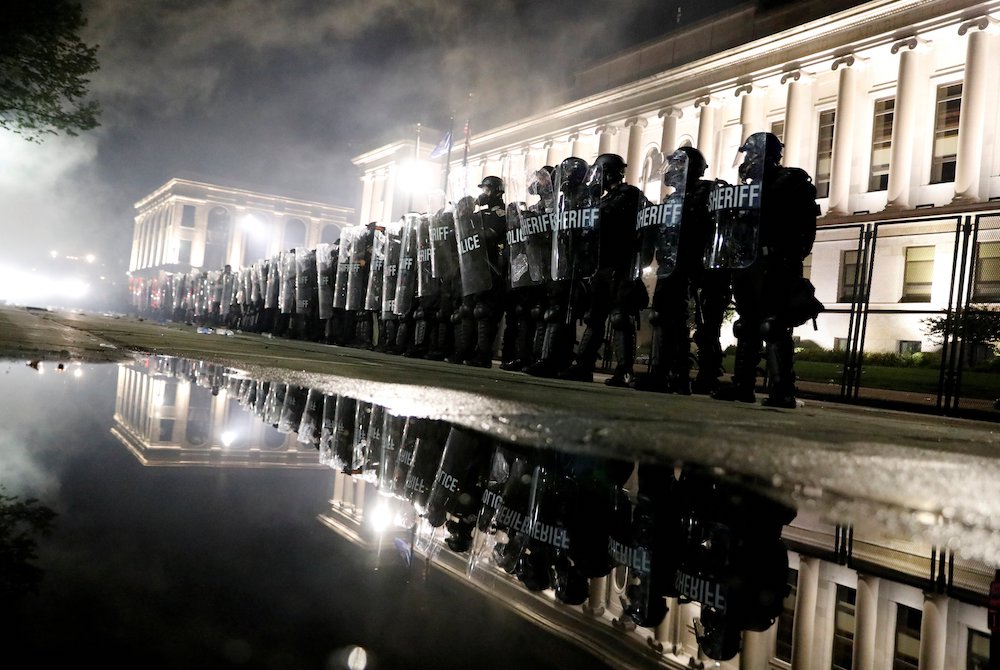 Law enforcement officers are seen in Kenosha, Wisconsin, Aug. 25, following the police shooting of Jacob Blake. The officer is white; Blake is Black man and was shot seven times in the back Aug. 24 while entering his car with his three small children inside the vehicle. (CNS/Reuters/Brendan McDermid)

President Donald Trump went to Kenosha, Wisconsin, this week to "survey the property damage" according to a White House transcript. He spoke a lot about law and order and very little about justice, as if the concepts are not necessarily related. To him, they probably are not.

A morally serious person would begin any examination of the damage in Kenosha with a look at an MRI of Jacob Blake's shattered torso. Blake was shot seven times in the back — reports said he was shot at "point blank range," but that phrase covers a range of distances — the gun only a few feet from his body. The video made the shooting look like a public execution.

A morally serious person would continue his survey of the damage in Kenosha by visiting with the family of Jacob Blake, especially his three young sons who witnessed the shooting. They are ages 3, 5 and 8, and the trauma to which they were exposed is horrific to contemplate. A morally serious person would express sympathy with the family and the community, mindful of how much more shocking the shocking video of Blake's shooting was if you knew the victim.

A morally serious person would understand that, while it is entirely fitting for the nation's chief magistrate to mourn the death of Aaron "Jay" Danielson, the 39-year old Trump supporter gunned down on the streets of Portland, Oregon, it is wrong to mourn his death publicly without mentioning the shooting of Blake, on the very day you are going to Kenosha. Such uneven treatment epitomizes the very reason it is still necessary to remind the nation that Black lives matter.

Through it all, Attorney General William Barr has decided to play the part of the ingenue. Watching his interview on CNN, in which he denied there was systemic racism in the judicial system, I wondered how a man so obviously intelligent could think his stance believable, or think we, the American people, would find it believable? Barr, recall, was attorney general back in 1992 when Los Angeles experienced riots after the acquittal of the police officers who beat Rodney King. Barr apparently learned different lessons from the rest of us.

Trump's opponent in the upcoming election, former Vice President Joe Biden, is a morally serious person. He delivered an important speech this week in which he confronted the canard that he was indifferent to the looting that has accompanied some otherwise peaceful protests. "I want to be clear about this: Rioting is not protesting," Biden said. "Looting is not protesting. Setting fires is not protesting. None of this is protesting — it's lawlessness — plain and simple. And those who do it should be prosecuted." That certainly was clear enough, even for a Fox News host!

Biden, however, recognizes that the broken storefront windows and the stolen merchandise are not isolated events. He understands that those windows are related to the wounds in Blake's back, and that keeping America safe requires more than bemoaning a storefront that has been vandalized while ignoring the justified anger that led to it. "I want a safe America. Safe from COVID, safe from crime and looting, safe from racially motivated violence, safe from bad cops," Biden said. "Let me be crystal clear: safe from four more years of Donald Trump."

The Democratic candidate also pointed out that political leadership demands a very obvious moral attribute, a willingness to tell the truth, not your truth, or my truth, or the truth of what you just saw on Twitter. The truth. Biden said: "In the early days of World War II, Franklin Roosevelt told the country, 'The news is going to get worse and worse before it gets better and better, and the American people deserve to have it straight from the shoulder.' Straight from the shoulder: The job of a President is to tell the truth. To be candid. To face facts. To lead, not to incite. That's why I am speaking to you today." I am sure Biden, like all politicians, like all human beings, has told his share of lies, but nothing like what we see from the incumbent. 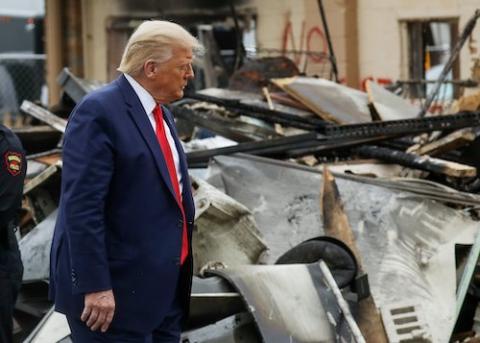 Trump appears incapable of denouncing violence by those who support him or of sympathizing with the suffering of those who don't. The man simply has no empathy and lacks the moral knowledge to recognize that moral evaluation is not dependent on whether or not we like someone.

Biden is a man of great empathy. He also has enough moral education to know that while a political leader can and should condemn all violence, there is no moral equivalence between shooting an unarmed man in the back, or kneeling on his neck until he is dead, and breaking a storefront window. Biden knows that law and order without justice is available to tyrants, a fact that would not disturb Trump. Biden's moral knowledge is imperfect, as is yours and mine; He is a politician not the savior. His inability to see the violence that is abortion is deeply regrettable, but it is not disqualifying, at least not when compared with the ample moral inabilities of the president.

As this summer of injustice comes to an end, the moral claim of anyone who opposes Trump is strong. The fact that the champion of that opposition is a decent man, with a great deal of empathy and some semblance of moral education only strengthens the case.