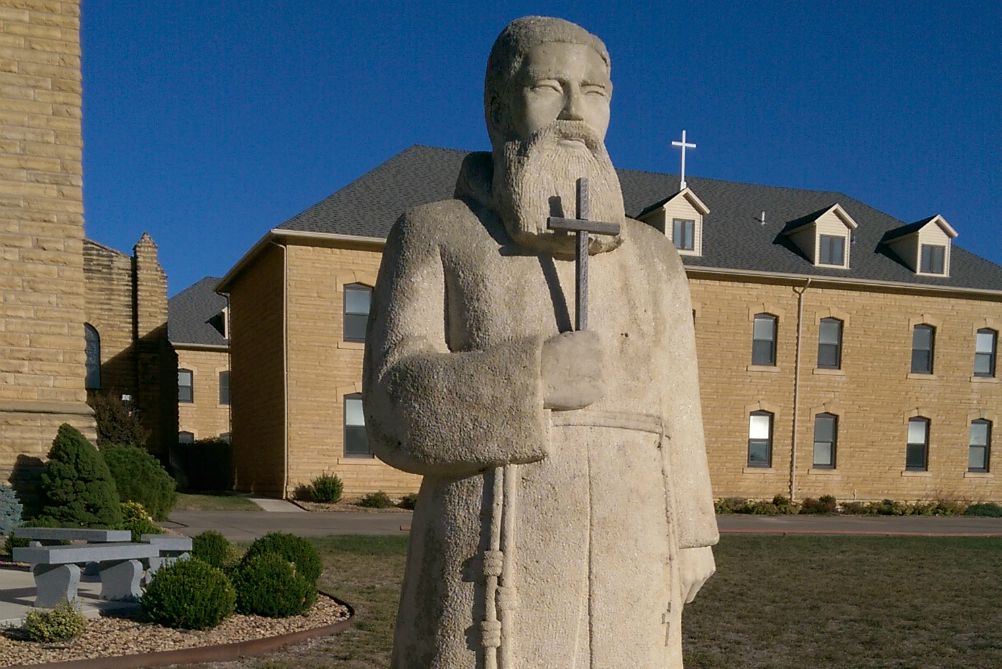 Statue at St. Fidelis friary in Victoria, Kansas, where Theodore McCarrick has been living since September 2018 (Wikimedia Commons/RobLa)

The Holy See's decision to laicize Theodore McCarrick, the former cardinal, only partially closes a sad and ugly chapter in the history of the Catholic Church in the United States. The victims of McCarrick's depraved behavior may find a modicum of healing in this execution of justice, but there is no way to give them back their childhood, nor the years of suffering that followed. To them, our hearts go out.

Similarly, to those whose faith has been shaken, for whom the realization that someone they esteemed was capable of such crimes, may they find comfort in the words of St. Paul that we all heard at Mass on Sunday: "If for this life only we have hoped in Christ, we are the most pitiable people of all." Our faith is not rooted in anything but the death and resurrection of the Lord Jesus. When he abandons the church, let us follow him out the door — and he has promised to never abandon her. The Lord keeps his promises.

It is impossible to square concern for victims with the efforts of some to weaponize the McCarrick tragedy for unrelated and incongruous objectives. Leave it to EWTN's Raymond Arroyo, whose execrable television show never ceases to miss the essence of Christianity, to use the McCarrick case to try and slime someone he does not like. Last week, he spoke with Robert Royal, and the two questioned Pope Francis' decision to appoint Cardinal Kevin Farrell as the camerlengo. Farrell was auxiliary bishop to McCarrick, and the two lived in the same house. "Roommates," Arroyo sneered, as if it was not the case that bishops often live with other priests. The two ignored the fact there were no accusations of McCarrick's misconduct during his time in Washington. This was merely an attempt to slime Farrell. It was despicable.

Equally despicable, and even stranger, was an op-ed by Catholic University theologian Chad Pecknold in the New York Post. Pecknold chastises McCarrick for being a "regular visitor to President Barack Obama's White House," evidently unaware that McCarrick was also a frequent visitor to George W. Bush's White House and that he hosted the president and First Lady Laura Bush at his home in the first week of the Bush presidency. Pecknold complains that McCarrick "opposed calls to deny Communion to pro-abortion politicians," although that is the position of most bishops, including the sainted John Paul II. He works in a favorable reference to Archbishop Carlo Maria Viganò, the deceitful ex-nuncio who lied to Pope Benedict XVI and lied about Pope Francis.

Pecknold sees larger forces at work in McCarrick's crimes. McCarrick "personified the spirit that swept the church in the immediate years after the council — one that mistook the council's teachings for an invitation to endless experimentation and the demolition of ancient moral barriers. McCarrick's laicization is a judgment not only against the man but also against that rebellious spirit." I suppose that is one way to look at the Second Vatican Council and its aftermath, but in my experience, most people who sought to return to the sources in order to bring the church up to date did not feel like rebels. They felt like faithful people trying to rescue the Gospel from 19th-century intellectual and cultural encrustations, renewing the church, not demolishing it. There are some horror stories, to be sure, but I do not remember any of them involving McCarrick. I do remember him leading a Mass at which the congregation did not kneel during the Eucharistic Prayer. He arrested the service until everyone was on their knees.

Pecknold claims that many in the post-conciliar church became so obsessed with "openness to the world" that they acquiesced in "turning altars around to face the people rather than the dying Jesus on the cross." You may see the change in the position of the altar as a return to the practice of the early Christian church, an attempt to more closely image the Last Supper, or you may think that facing liturgical east is preferable because it evokes other important symbols, but what the hell does ad orientem worship have to do with McCarrick abusing minors and seminarians? McCarrick, who would have celebrated the Mass facing away from the people for the first 10 years or so of his priesthood?

You expect this kind of vicious nonsense from LifeSiteNews or ChurchMilitant, but from a Catholic University professor? From EWTN? Okay: EWTN has always peddled nonsense. Still, the extent of the consistently vicious attacks on the pope and his closest aides on Arroyo's show is startling. Where is Michael Warsaw, the CEO of EWTN? Where is the Bishop of Birmingham, Alabama, where EWTN is based? I have said it before and will say it again, the bishops of this country need to lance this media boil. That was obvious at the time of the apostolic visitation of Mother Angelica's monastery in 2000. It has only become more obvious since.

I also must register my disappointment at the spirit of vindictiveness directed at McCarrick. Victims are allowed to be angry for the rest of their lives. So, too, are their families. I was surprised to read Jennifer Haselberger's questioning whether the punishment of laicization was severe enough. Haselberger is the brave canon lawyer who quit and blew the whistle on the covering up of clergy sex abuse and failure to follow the norms set forth in the 2002 Dallas Charter for the Protection of Minors by Archbishop John Nienstedt in the Twin Cities. "The reality is that, leaving aside the issue of embarrassment, and I'd be cautious on that, what difference does it make to McCarrick?" Haselberger told The Washington Post. "Realistically, when we think of justice, what will he experience? And he will know in his heart of hearts that he's still a priest."

I suspect that for McCarrick, a death sentence would have been preferable to laicization. But, really, what would Haselberger have us do? Flay him alive? Justice has been done, but we are still, as Christians, called to balance the scales of justice with Christ's message and mission of mercy. Clemency and pardons on account of old age and ill health are common in our civil judicial system. Should they be banished from the judicial processes of a church founded by the One who came to preach good news to the poor and to set the captives free? McCarrick did terrible things. He has been justly punished to be sure. But as we oppose capital punishment, even for the most heinous crimes, because of what it says about us, not just what it says about the condemned, so let Catholic Christians avoid this spirit of vindictiveness.

"Mercy and truth have met together," begins the general's toast in the climactic scene of "Babette's Feast," Pope Francis' favorite movie. "There comes a time when our eyes are opened. And we come to realize that mercy is infinite." We know the truth of what McCarrick did. We are still learning about how his misdeeds were ignored or covered up, and that forensic task must surely proceed. But we must not obstruct mercy when it seeks to meet truth. If we do, our faith is in vain. Grace, and grace alone, will heal the broken-hearted, but we believe that such grace is possible because we have heard of it with our own ears: "Jesus, remember me, when you come into your kingdom."