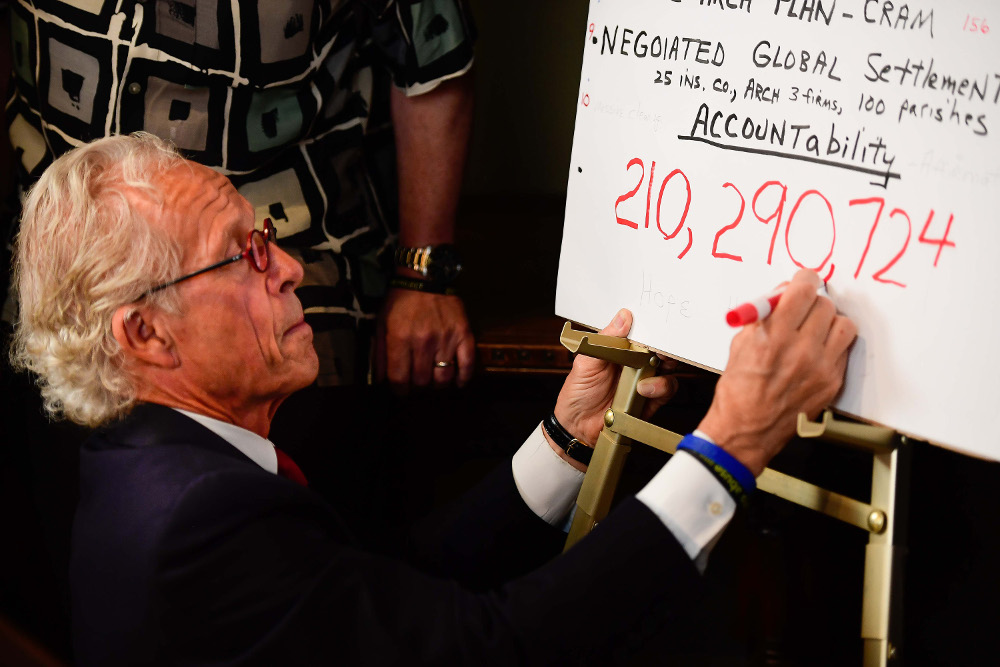 Attorney Jeff Anderson writes down the sum of the settlement reached between the Archdiocese of St. Paul-Minneapolis and clergy abuse survivors during a May 31 news conference detailing the agreement in St. Paul, Minnesota. (Minneapolis Star Tribune/TNS/Aaron Lavinsky)

Editor's note: An update was made to this story at 11 a.m. Central time June 1 with reactions from abuse survivors and advocates.

A $210 million settlement has been reached in the bankruptcy of the St. Paul-Minneapolis Archdiocese, what attorneys for more than 400 survivors of clergy sexual abuse are calling the "largest settlement ever reached in a Catholic bankruptcy case."

At a press conference in his St. Paul office May 31, Jeff Anderson, attorney for abuse victims, announced that a consensual agreement was reached late May 30, essentially concluding an often contentious process begun nearly three and half years ago.

That total represents more than triple the archdiocese's initial proposed plan of $65 million, and $50 million more than its most recent proposal. The settlement, pending approval by U.S. Bankruptcy Court Judge Robert Kressel, will resolve all litigation against the archdiocese and its parishes and other entities related to the clergy sexual abuse scandal. A trust fund, headed by an independent trustee, would be responsible for distributing payments among 450 abuse survivors.

"This has been a long day coming," said Jim Keenan, an abuse survivor and chair of the creditors' committee. "It's a triumph … an absolute triumph."

Keenan, who estimated he has been in court with the church for 13 years, said that by rejecting the archdiocese's initial offer and putting forth their own, the creditors' committee "changed the playing field. They have to listen to victims now, and that is huge."

"It's worth more than the red number on the bottom of that page," he said.

The settlement stands as the largest reached in the Catholic Church's clergy sexual abuse scandal through bankruptcy, surpassing a $198 million settlement in 2007 by the San Diego Diocese. The $660 million payment to abuse survivors by the Los Angeles Archdiocese, also in 2007, remains the largest sum awarded.

Read this next: Catholic dioceses and orders that filed for bankruptcy and other major settlements

All three parties increased their contributions to the fund, said Thomas Abood, chair of the archdiocese's finance council and its reorganization task force, and who Archbishop Bernard Hebda credited as the one who "personally negotiated today's agreement on behalf of the archdiocese."

"While today marks the end of a very difficult period for many, today really signals a new beginning," Hebda said at a press conference outside the chancery offices, now located in the an office building after the sale last year of its chancery headquarters on Cathedral Hill. "The completion of the bankruptcy process allows pursuit of a new day that has many realities: atonement, healing and restoration of trust."

The archbishop said he was "very sorry" that the church let down those who were sexually abused as children, and he thanked them for coming forward.

"Without their courage and persistence, today would not have been possible. … I recognize that the abuse stole so much from you: your childhood, your innocence, your safety, your ability to trust, and in many cases, your faith," Hebda said.

News of a possible settlement came May 31, with Anderson announcing a press conference for 1 p.m. Central time, but offered no other details. He later tweeted that it would address the details of "the consensual bankruptcy plan reached between sexual abuse survivors and the Archdiocese of Saint Paul & Minneapolis."

At the press conference, he called the settlement "a story of trauma to triumph, and the pursuit of truth and accountability."

The moment was filled with tears and raw emotions, with abuse survivors and fellow attorneys flanking each side of the longtime abuse attorney. Marie Mielke, an abuse survivor and member of the creditors' committee, said the settlement represented to her that her alleged abuser Fr. Michael Keating "didn't take anything" from her. The efforts of abuse survivors were bent on protecting such trauma from happening to other children, she said, adding her heart aches for those carrying their own burdens of sexual abuse.

"I just want to reach out to you now to say you are not alone, you are worth it, you are enough, you are beautiful," Mielke said.

Anderson credited Minnesota's Child Victims Act, passed in 2013, that "really opened a window and an opportunity for survivors to have a voice" and take action.

Anderson listed 10 components he said were part of the settlement, much of it recapping the events that have transpired through the Twin Cities since revelations of mishandled abuse allegations by the archdiocese came to light in the fall of 2013. That included the naming of 91 clerics credibly accused of abuse not previously known, and the release of 100,000 pages of documents — a number the attorney projected will ultimately double.

The Twin Cities' bankruptcy saga began with the archdiocese's filing for Chapter 11 reorganization in January 2015. Weaved through it have been the resignations of Archbishop John Nienstedt and Auxiliary Bishop Lee Piché, along with numerous archdiocesan officials, as well as the filing and eventual settlement of civil and criminal charges for the archdiocese's handling of sexual abuse allegations against former priest Curtis Wehmeyer.

The archdiocese's plan would have provided up to $162 million, though the archdiocese's contribution would be limited to $13.8 million, with a $500,000 counseling fund established for sexual abuse survivors.

At one point, the claimants sought nearly $1 billion, what it alleged to be nearly half of the archdiocese's total assets.

Abood said mediation "was far from a simple matter." Before last night's deal was struck, he said there were 18 full days of mediation sessions just to reach a point where final negotiations could occur.

Attorney and legal fees, estimated currently at $20 million, will be taken out of the settlement, he added.

Over the course of 41 months, the bankruptcy proceedings danced from hopeful truces to combative exchanges between the archdiocese and survivors' attorneys.

At the onset, Anderson had predicted that the Twin Cities bankruptcy would wrap within two years, and would not mirror that of the Milwaukee Archdiocese, which concluded in November 2015 —nearly five years after its filing — with a $21 million settlement split among 456 abuse survivors. That optimism stemmed from a settlement reached three months earlier with the St. Paul-Minneapolis Archdiocese and the Winona, Minnesota, Diocese he hailed as ushering in "a new day" and "a new way" in preventing child sexual abuse in the church.

By May 2016, a year and a half into the bankruptcy, Anderson declared that "new day" in relations between his firm and the archdiocese had ended, as the two sides clashed over what constituted fair compensation, and the true value of the archdiocese's total assets, what survivors' attorneys alleged to be nearly $2 billion.

As part of the civil and criminal settlements, reached with Ramsey County in December 2015 and July 2016, respectively, the archdiocese agreed to court oversight for four years, through February 2020, along with three audits to verify compliance with the full settlement terms. Results from the first audit, released in January and conducted by Stonebridge Business Partners, the same Rochester, New York, firm that conducts the annual audit of the U.S. bishops' Charter for the Protection of Children and Young People, found the archdiocese as "substantially compliant."

The settlement agreement also calls for the archdiocese to hold a one-day conference on restorative justice and reconciliation within 18 months of the settling its bankruptcy. In late April, two parishes held "healing circle" sessions conducted by Janine Geske, a retired Wisconsin Supreme Court justice who founded the Restorative Justice Initiative at Marquette University.

The turnout of 50 people for the session at Our Lady of Lourdes Parish in Minneapolis was heartening to its pastor, Fr. Dan Griffith, who told NCR he hoped more such healing-focused initiatives "will bear fruit in the coming months."

"I'm heartened that a settlement has been reached, and I'm particularly happy for victim survivors of clergy abuse in the archdiocese," he said. "Now we can move resolutely toward greater healing and restoration for those who have suffered abuse, and for our local church."

The uncertainty of bankruptcy has loomed over the archdiocese like a shadow, said Charles Reid, a civil and canon law professor at the University of St. Thomas in Minneapolis. Once finalized, its end he said may offer the church "a foundation from which to begin to win people's trust."

First and foremost to doing so, he said, is demonstrating an ongoing vigilance toward child protection. To that end, Reid pointed to the abuse prevention parameters outlined in the Ramsey County as important measures.

Jennifer Haselberger, the former chancery official whose reporting to local media and law enforcement precipitated the years-long abuse scandal, remains skeptical of the steps taken by the archdiocese, noting that Fr. Jonathan Shelley was returned in January to limited ministry working with inmates. In 2014, Washington County prosecutor declined to pursue criminal charges related to alleged child pornography on Shelley's computer, determining none of the photos met the statutory definition of pornographic work involving a minor.

As for the settlement, Haselberger said it was not a pastoral decision or the conclusion of a process intent on repairing harm or fairly compensating survivors. "This was a financial decision made by an organization," adding that strategy meetings for bankruptcy had begun in the chancery before her departure as chancellor for canonical affairs in April 2013.

"This should have happened years ago," she said.

The settlement demonstrated the power of statute of limitations reform, said Terance McKiernan, co-director of the watchdog group BishopAccountability.org that tracks bankruptcies and settlements from the church's sexual abuse crisis.

"You can draw a straight line between the Child Victims Act and this day," he told NCR.

He said the size of the settlement seems to suggest that "survivors are going to be fairly compensated." It could also serve as a "bellwether," he added, for others to come in two other Minnesota dioceses, Duluth and New Ulm, currently going through their own bankruptcy proceedings. The St. Cloud diocese announced in February its intention to file for Chapter 11 reorganization but has yet to formally do so.

"I hope it's a sign that these settlements are going to be correct, that they're going to do what really needs to be done by the survivors in these communities," McKiernan said.

"I hope also that the institutional church realizes that this should never happen again," he added.

A version of this story appeared in the June 15-28, 2018 print issue under the headline: $210 million to settle bankruptcy.