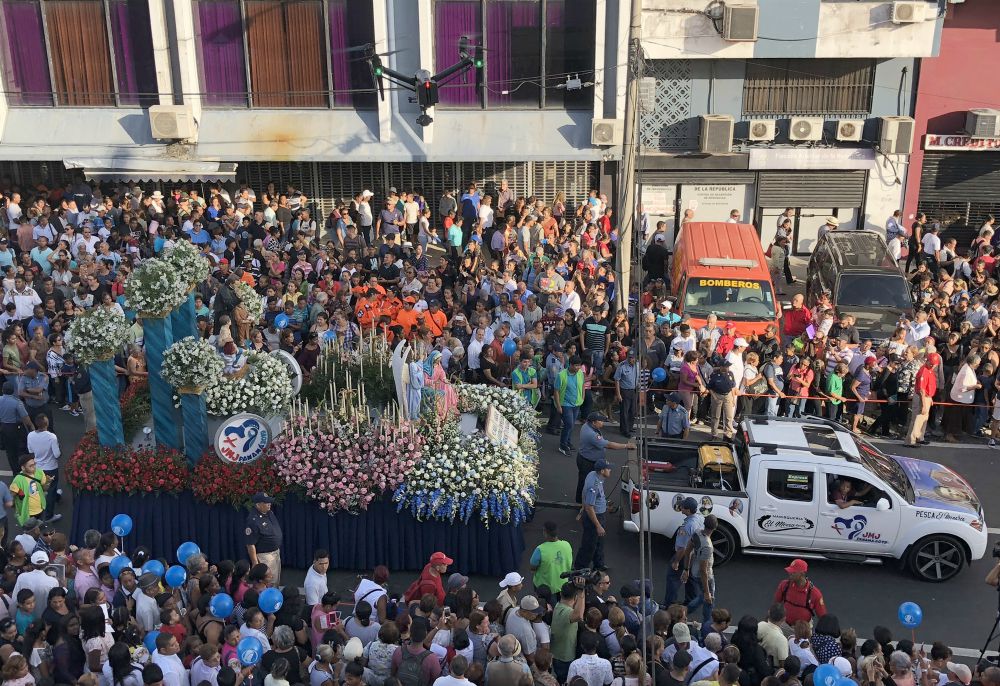 People pack the street during a celebration in honor of St. John Bosco on his feast day, Jan. 31, in Panama City. The 19th-century saint, who founded the Salesian order, was called to serve poor and neglected children. Discussed in this column: Documents from the fifth CELAM conference in 2007 affirmed popular religion, such as celebrations of patron saints. (CNS/Brian Bransfield)

Monday, I began my review of Rafael Luciani's important new book Pope Francis and the Theology of the People, and I finished by noting that he traces the decisive influence of the various meetings of the Latin American bishops' conference, CELAM, through the years. I will pick that theme up as I conclude my review today, noting some connections to contemporary ecclesial issues.

From Medellín, in 1968, he notes the bishops committed themselves to "a church that treats others as agents with shared responsibility; seeing the locus of the people's situation as a place for God's revelation; a church that understands itself not only as bearing and leading the poor, but also as being borne and evangelized by them." How much does that resonate with the Von Hügel address delivered by Cardinal Blase Cupich last week at Cambridge University? The cardinal was talking about Amoris Laetitia and the challenges of family life, but he repeatedly applied these principles to that discussion as well. The pastoral conversion at the heart of the papacy of Francis finds its hermeneutical keys in these texts from CELAM.

Luciani turns to the San Miguel Document, adopted by the Argentine bishops in 1969, throughout the book. He writes:

The San Miguel Document recognizes the people's culture as the ethno-mythic core that must be preserved, and it asserts that people need to be freed from any outside influences that would change them through ideology. To understand the popular realm means to understand the community matrix of the experience of faith. As Rafael Tello has said, "In order to be oriented to God, popular culture looks at concrete human beings who, being social, exist in community, that is, in a people, which as a whole lives among earthly realities. This is their world." Thus the popular realm is the site of liberating or prophetic ministry, insofar as this means responding to the signs of the times as evidenced in the sociocultural reality of poor peoples, who constitute the majority of humankind.

It is not much of a challenge to realize how different this post-Vatican II experience of faith has been in Latin America from that in the U.S. where increasingly a highly privatized piety is the hallmark of Catholic identity. And, again from the San Miguel Document, Luciani finds another harbinger of Pope Francis when that text speaks of "a church of the poor in fidelity to their being a sacrament of Christ."

The CELAM meeting at Puebla, Mexico, in 1979 incorporated insights from the synods of bishops that had transpired since Medellín and especially Blessed Pope Paul VI's great apostolic exhortation Evangelii Nuntiandi. The final document at Puebla links evangelization of culture with what had traditionally been thought of as Catholic social teaching, and states, "it is no longer a matter of the Church's social ministry, but it is simply pastoral ministry or evangelization, which includes, as an integral part, the social dimension or advancement of the human in terms of development and liberation."

The Puebla document also notes that "new situations that arise from sociocultural changes call for a new evangelization," a theme that would become dominant in the pontificate of St. Pope John Paul II, even as that theme took on a different character during the reign of the Polish pontiff. But for both Puebla and John Paul II, and quite different from our American penchant for separating not only church and state but religion and society, the liberation brought about by the Gospel, "takes in all the different dimensions of life: the social, the political, the economic, the cultural, and all their interrelationships. Through all these dimensions must flow the transforming treasure of the Gospel." One hears those words from Puebla and thinks of the words of St. Pope John Paul II at his inaugural Mass the previous October when he proclaimed, "Open wide the doors for Christ," and enumerated the doors of culture, economy and even state that he proposed to open.

Related: Theology of the people critical to understanding Francis

It is at Aparecida, in 2007, that the Fifth CELAM conference distills the theology of previous sessions and leavens it with the thinking of Pope Paul VI, explicitly echoing his words to the peasants at Bogotá in 1968: "You are a sign, a likeness, a mystery of Christ's presence." The bishops gathered in Brazil, like their predecessors at previous CELAM meetings, rejected the prevailing "standardizing logic of cultural globalization" as Luciani puts it. And again opening a window into a central theme of Pope Francis' pontificate, Aparecida's document affirms popular religion — "patron saint celebrations, novenas, rosaries, the Way of the Cross, processions, dances and songs of religious folklore, affection for the saints" — not as "ritual expressions parallel to the official ones. They express a mystique that is manifest in its own [popular, cultural] manner," an "experience of interior pilgrimage" that relies on "the internal action of grace." This is no baptizing of modernity nor an iteration of liberal Catholicism. This is theology that stands with the people, with actual real people and the culture they create, celebrating precisely those religious expressions that modern and learned folk disdain. 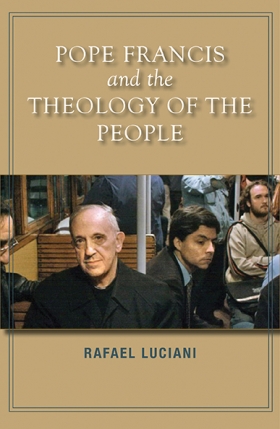 People pack the street during a celebration in honor of St. John Bosco on his feast day, Jan. 31, in Panama City. The 19th-century saint, who founded the Salesian order, was called to serve poor and neglected children. Discussed in this column: Documents from the fifth CELAM conference in 2007 affirmed popular religion, such as celebrations of patron saints. (CNS/Brian Bransfield)

The critiques of modernity that runs through the various documents of CELAM meetings come to fruition in Evangelii Gaudium, the Holy Father's programmatic apostolic exhortation issued in 2013. The neo-liberal paradigms that dominated at the Davos world economic forum in January are rejected outright and there is no number of Napa Institute conferences that will bring the church to baptize them. It is on this point, above all, that there is clear continuity in Catholic social teaching between the pre-conciliar papal magisterium, the documents of Vatican II, the papal magisteriums of Popes Paul VI, John Paul II, Benedict XVI, and Francis. In a word, the attempt by American Catholic neo-conservatives such as Michael Novak, Richard John Neuhaus and George Weigel to claim a new direction in social teaching based on a tendentious reading of John Paul II's encyclical Centesimus Annus, that attempt is shown here to be an utterly failed project.

Subsequent chapters are entitled "Pastoral Geopolitics of Peoples and Their Cultures" and "From Ecclesial Culture to Personal Encounter with Jesus." I hoped the geopolitics chapter would help me understand what I have long considered a deficit in Catholic social teaching (including that of Pope Francis), the failure to recognize the changed political landscape when one moves from the national to the international. It correctly notes the ways that in modern, globalized culture "man has been reduced to one of his needs alone: consumption" and that there are remedies in law a nation can adopt to address the ills that flow therefrom. It is, I believe, the absence of any normative international legal structure that often makes papal teaching in this area sound completely unrealistic. Luciani did not address this issue, so I remain befuddled, but it is wrong to criticize an author for failing to write the chapter I wanted to read.

"What actually humanizes is intercultural and interreligious interaction and integration between the different groups coexisting in a society, the symbiosis that is generated in a horizontal relationship, built on a first-name basis of subject to subject."

What is different with Francis as explained by Luciani, is the emphasis on people and culture, and the goal of humanization. "What humanizes is not simply recognition of pluricultural reality, which would be limited to respect for spaces acquired and gained socioculturally and politically in terms of rights, in particular political rights," Luciani explains. "What actually humanizes is intercultural and interreligious interaction and integration between the different groups coexisting in a society, the symbiosis that is generated in a horizontal relationship, built on a first-name basis of subject to subject." Luciani's insight here will require additional theological reflection. What is clear, even to a non-theologian like myself, is that the theme of inculturation, so pronounced in Papa Bergoglio's thought, is even richer than it seemed at first and it distinguishes Francis from his immediate predecessors. The trajectory is Vatican II to Paul VI to Francis.

The final chapter, on ecclesial culture, addresses what Pope Francis means when he invokes "the spirit of Vatican II" and how, with Karl Rahner, he recognizes the need to move past the Tridentine model of ecclesial culture to a missionary and evangelizing ecclesiology. The section on "the pathology of power" should be a must-read for all Catholics in positions of authority, lay or clerical alike. It certainly shapes Pope Francis' frequent exhortations against worldly clergy and against pride in general.

This is a marvelous book and an important one. While reading it, I have been in the midst of renovating the old farmhouse in which I grew up. As I explained to one of my favorite pastors, such an endeavor is an almost daily temptation to be immersed in middle-class and upper middle-class fretting about styles and money, so easy to forget to be grateful that, unlike too many of my fellow humans, I have a roof over my head and food on my plate. As I have observed before, the great gift of Latino immigration into the United States is that they are saving Catholicism, which was in danger of becoming an upper middle-class club for people with conservative sexual ethics. Luciani explains what we intuit as we watch Pope Francis: that our wonderful Holy Father is unafraid of the radical call of Christian discipleship, that he correctly recognizes the ideological threats to such discipleship and proposes an alternative path forward for the faithful people of God. Buckle up, fellow Catholics: This pope is leading us forward by leading us back to that vigor which characterized the early Christians, and Rafael Luciani's book is a kind of theological GPS for the journey.