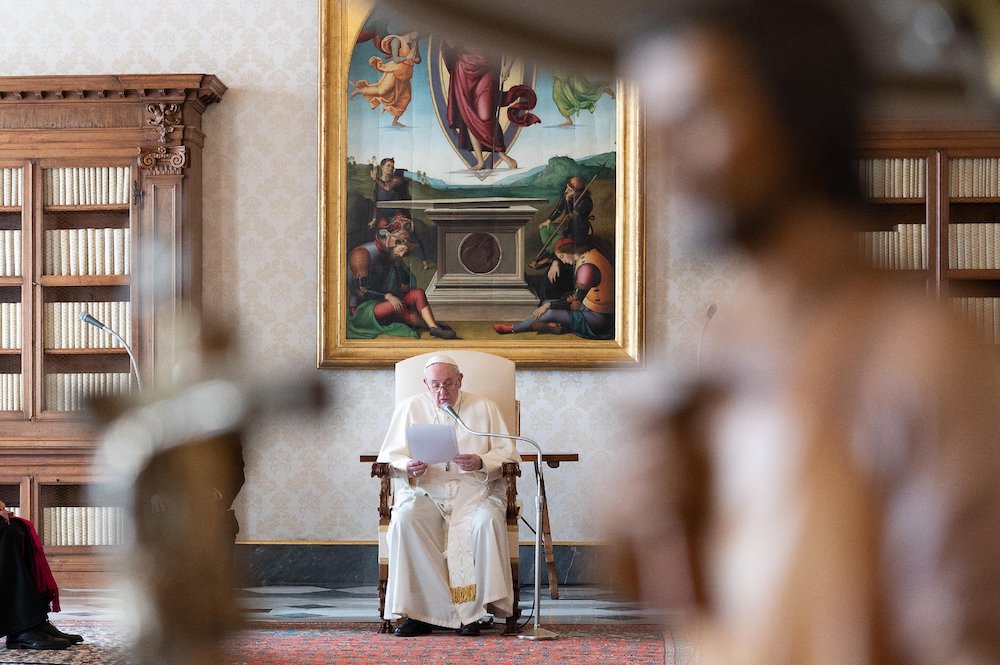 Pope Francis leads his general audience in the library of the Apostolic Palace at the Vatican Nov. 25. (CNS/Vatican Media)

At last week's general audience, Pope Francis expressed his concern about Catholic groups that chart their own path. His words are a challenge to those on both the left and the right who discount the importance of thinking with the church.

"At times, I feel a great sadness when I see a community that, with goodwill, takes a wrong path because it thinks it is making the church through gatherings, as if it were a political party: the majority, the minority, what this one thinks of this or that or the other, [saying], 'This is like a synod, a synodal path that we must take," the Holy Father said. "I ask myself, 'Where is the Holy Spirit there? Where is prayer? Where is the community's love? Where is the Eucharist?' Without these four coordinates, the church becomes a human society, a political party," he said. "But there is no Holy Spirit."

We are accustomed to the pope using harsh words against the conservative legalists in the church. "A rigidity born of the fear of change, which ends up erecting fences and obstacles on the terrain of the common good, turning it into a minefield of incomprehension and hatred," Francis scolded in last year's Christmas address to the Roman Curia, the Vatican equivalent of a State of the Union address. "Let us always remember that behind every form of rigidity lies some kind of imbalance. Rigidity and imbalance feed one another in a vicious circle. And today this temptation to rigidity has become very real."

Last week, however, his words seemed directed at us, the more liberal wing of the Catholic Church. And it behooves us to pay attention because, if we are honest with ourselves, we know the pope is diagnosing a real problem.

It is one of the saddest facts about a certain kind of liberal Catholic that, as the pope said, with nothing but goodwill, they take a wrong path with an agenda that may be defensible or even laudable on other grounds, but is no longer a Catholic path. They consider the doctrines that have defined our church for centuries as so much silly putty in their hands, to be stretched any which way to achieve an objective that may not be reconcilable with the Catholic faith. I have said it before and will say it again: Just because a Catholic has a thought does not mean it is a Catholic thought that has been had.

Or, especially among us Americans, we forget that ours is a universal church and that reforms that seem overdue for us would risk breaking the communion of the church throughout the world. All humans are capable of myopia, but the Catholic thinker must acknowledge and wrestle with claims beyond her culture. Justice and unity both have claims on our hearts and minds.

I have been unstinting in my criticism of those conservative Catholic groups like "Priests for Life" that reduce the church's public witness to fighting abortion. This is a gross distortion of the fullness of the church's teaching. But it is equally problematic when liberal Catholics do it, such as when they decline to defend the unborn, or make excuses for politicians who refuse to defend the unborn. The same teaching that leads us liberals to fight for the undocumented and the poor must include the unborn or we are no longer thinking with the church. If we love the church, we must be willing to stand apart not only from groups like "Priests for Life" but also groups like "Catholics for Choice."

Similarly, those who believe opposition to tolerance for gay and lesbian persons is a central part of our religion — it isn't — are as problematic as those who clamor for gay marriage without any concern about the effect such a change would have on the unity of the universal church.

There are those Catholics on the left who avail themselves of social science in diagnosing what ails the church, and there is nothing wrong with that. But it becomes wrong when we forget that the Holy Spirit is at work in the life of the church, that analytical models may be fine so far as they go, but the Spirit blows where it wills. Improved management techniques can help introduce greater accountability in the life of the church, but the most important reform of the church in history, the founding and spread of the mendicant orders in the 13th century, did not start with a report from McKinsey; it started when St. Francis first kissed a leper.

The Catholic intellectual and moral tradition should certainly engage the world of ideas beyond itself. But why do so many essayists invoke that tradition in sentimental and nonrigorous ways while citing academic foolishness, from Marxism to gender theory, as if these were beyond question?

Is there a fad on the political left that the Catholic left has resisted? I can't think of any. The ability of the secular left and the Catholic left to self-marginalize never ceases to astound, but let's be clear: When someone says they believe transgender rights is the civil rights issue of our time, as Joe Biden once did, they are playing to the cameras for a small, and elite, audience. The rest of the country and the church scratches their heads. One of the reasons Biden managed to win this last election is because he did not repeat such foolishness.

When I read the Holy Father's encyclical Fratelli Tutti, I saw a voice different from the mainstream left. As a whole and in so many distinct paragraphs, that document challenged the Catholic right far more than it challenged the Catholic left. How could it not? The contemporary American Catholic right is so far from traditional Catholic social doctrine, so drunk on the libertarianism of the age, that every pope since Leo XIII challenges them.

But there were moments when reading that encyclical that I thought that the pope was speaking in ways no longer common on the Catholic left. At the very beginning, the Holy Father cites St. Francis' attitude, shared with his brothers, "to be subject to every human creature for God's sake." Subjection of self is not held in very high regard these days when self-assertion is the standard.

Similarly, the pope writes, "Although I have written [this encyclical] from the Christian convictions that inspire and sustain me, I have sought to make this reflection an invitation to dialogue among all people of good will." He cites the Scriptures throughout and begins the entire document with a powerful, multilayered reflection on the parable of the good Samaritan.

This kind of deep dependence on the tradition is often absent from much Catholic writing today, in which Scriptural references serve as proof texts, not as foundational to a particular argument.

In Paragraph 13, the pope accurately diagnoses the dead end that has been deconstructionism, and in the following paragraph of the text, he speaks out against culture colonization of which the West is so often guilty. In Paragraph 166, Francis discusses concupiscence — when was the last time you saw a theologian writing here at NCR about that?

And at Paragraph 206, Francis confronts the problem with relativism, which really is a problem, even though it is common on the Catholic left to hear people preface their arguments with the words, "Speaking as a [fill in the blank]," words that are sometimes used to invite an interlocutor into a different set of experiences, and other times to mark a claim of privileged hermeneutic, the end of discussion by erecting a wall of relativism.

Conservative Catholics have more to worry about when they hear Francis is about to give a major talk or draft a new encyclical. But the pope invites us on the left side of the spectrum to stretch and to grow as well. Last week's general audience address was one for the ages and I commend it to all.