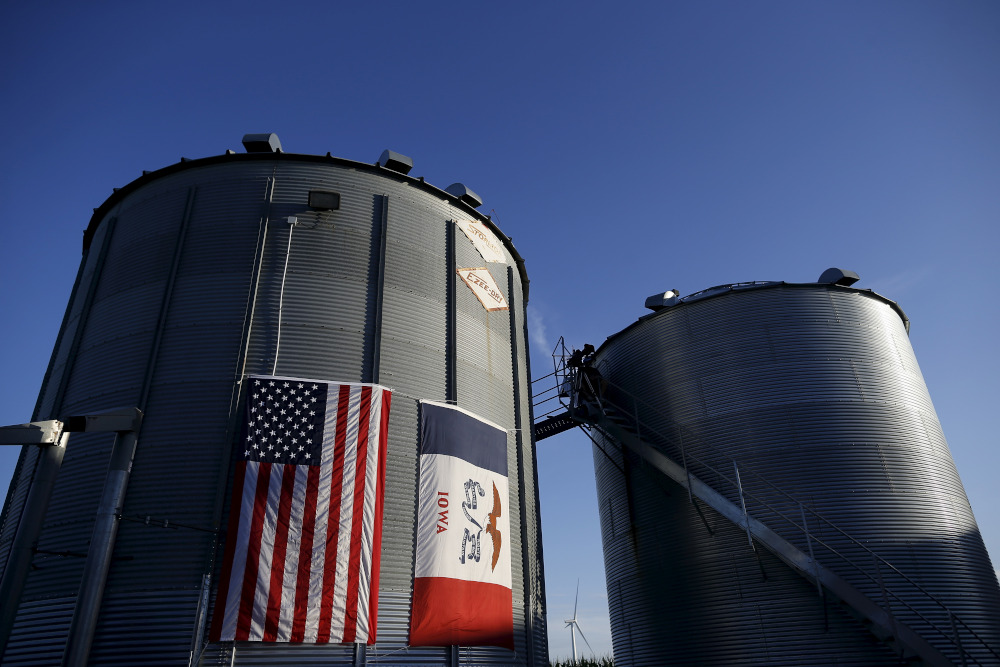 In this 2015 file photo, grain silos are seen in Haverhill, Iowa. (CNS/Reuters/Jim Young)

Last night's Iowa debate was something of a yawn. The moderators began with more than a half hour of questions about foreign policy that made more than half the country want to switch to "Chicago P.D." Wolf Blitzer tried his best to get the contestants fighting with one another, especially on the subject of former vice president Joe Biden's vote to authorize the Iraq War, but no one took the bait.

Even when the moderators raised the straightforward issue of whether Sen. Bernie Sanders did nor did not tell Sen. Elizabeth Warren that he did not think a woman could win the White House in 2020, neither candidate went for the other's jugular, although that moment gave Warren the one viral snapshot of the night, pointing out that the male candidates on the stage had lost a combined 10 elections in the past 30 years while she and Sen. Amy Klobuchar were the only candidates who had never lost a race.

This was the last debate before Iowa voters go to the caucuses on Feb. 3. And, to say that the race was fluid going into last night's debate is a vast understatement: The most remarkable thing about the latest Des Moines Register poll is not that it has Sanders in the lead and Buttigieg losing steam. It is that only 40% of voters said they had made up their minds. The next few weeks will see the impeachment trial dominating the news: Klobuchar, Sanders and Warren will need to be in their seats Monday through Saturday, which might give Biden and Buttigieg an edge as they are free to traverse the Hawkeye state. But impeachment will be diverting a lot of attention away from the campaign trail.

All the candidates faced a dilemma. On the one hand, now is the perfect time to create a viral moment that makes you stand out from the pack, look like a leader, move the voters in your direction. The easiest way to do that is to take on one of the other candidates. Sen. Kamala Harris had one such moment in the very first debate back in June, when she went after Biden because of a comment he made about collaborating with segregationist senators. The moment raised Harris' profile and she moved up in the polls, but then she could not sustain the momentum and dropped out of the race. In the December debate, Warren confronted Buttigieg over his fundraiser in a wine cave, and wine cave was a meme by midnight.

None of the candidates opted to be that aggressive. Instead, they all recognized the danger in attacking one of the other candidates, which has to do with the structure of the Iowa caucuses. At each caucus site, representatives of the candidates make a pitch and then the voters go to different parts of the room to caucus for their preferred candidate. The threshold for earning a delegate from each location is 15%. If any group falls short of that threshold, those voters are permitted to caucus for a different candidate. Being the second choice of voters for other candidates is a big deal in Iowa. Attacking someone whose voters might be up for grabs at dozens of precincts is not a smart strategy.

So, did the trajectory of the campaign change tonight? I suspect Klobuchar, who needed a strong night and did not have it, will drop out of consideration. Her answers were entirely inside the Beltway: She said she introduced a bill some years ago, which sadly did not pass; she serves on such-and-such a committee which examined such-and-such an issue. It was painful. She lost the philosophy and history and economics professors' votes when she declared that "we need to connect education with the economy. We are not going to have a shortage of MBAs; we're going to have a shortage of plumbers." But, she did not develop the point sufficiently to turn it into a winning moment.  After the December debate, all the pundits declared her the winner, and she began to move up in the polls. No one was praising her performance last night.

Mayor Pete Buttigieg was a study in low energy until his closing statement which was excellent but also came past 11 p.m. The foreign policy discussion at the beginning was a chance for him to shine, and he did not rise to the occasion. He peddled his anti-Washington, generational change theme which is fundamentally dishonest: We have heard it before, and we know that the problem is that some politicians, at both the federal and state level, are beholden to powerful, moneyed interests, not that some at the trough are Washington veterans and some are not. Did he really spend time discussing the problem of the federal deficit? That is a top issue at the Brookings Institution, not in Des Moines.

Biden had a strong closing but the rest of the night he was weak, very weak. "Character is on the ballot," he closed. "American character …. We have to restore American's soul." His campaign is a mix of two themes, this pitch about character and his appeal to his experience. But I do not think he realizes the degree to which his experience is a liability. During the foreign policy discussion about the Middle East he said, "We have lost our standing in the region." I made a marginal note: Hillaryesque. And while he presents himself as the man who is steady and strong, most of his performance last night was unsteady and weak.

Bernie is Bernie. He hit Biden on his Iraq war vote. He made the straightforward case for Medicare for All, focusing on the insanity — it is the correct adjective — of America's paying twice what other countries do for health care that is far less comprehensive. On trade, he passes every purity test and grasps the essential problem with most trade agreements, that the enforcement mechanisms have more holes than Swiss cheese, although he did not hit that particular nail on the head last night. He was the only candidate to reference the Green New Deal, a touchstone for progressive voters.

Tom Steyer had an excellent debate. No one challenged on his impeachment drive which, more than anything, gave credence to the GOP allegation that Democrats have had impeachment in mind from the moment President Donald Trump won. But his answers were crisp and thoughtful. I do not think it will make a difference. Putting up a billionaire against Trump is simply too counter-intuitive.

There will be TV ads and radio ads and events, but last night was, for most voters, their last taste of the candidates.

Warren was high energy until the closing statements. In October and November, she fumbled in discussing health care policy but she also failed to bring every answer back to her central theme — that corruption is the problem — as she had done in earlier debates. Last night, even during the boring discussion of foreign policy, she was the only person to discuss the revolving door between the Pentagon and the defense industry. On health care, she dodged all bullets and presented herself as the person who could unite the party. That theme of uniting the party came up again in the discussion of gender, when she hit the only home run of the night. At the end, in her closing statement, she fell back into Harvard professor mode, delivering a laundry list of leftie cultural issues that made millions of Americans roll their eyes, if they were still watching.

If you run a restaurant, one of the most important tasks is to make sure the coffee is always fresh. Why? Because that is the last taste most customers experience and they will return home or to work with that taste in their mouth. There will be TV ads and radio ads and events, but last night was, for most voters, their last taste of the candidates. I think Sanders and Warren gave their voters plenty of reasons to stick with them and might have convinced a few others to back their campaigns. Biden and Buttigieg did nothing to help themselves but did not make the kind of self-inflicted wound that would permanently damage their candidacies. Klobuchar may be out of the race. Maybe Steyer will catch fire but I doubt it.

In one sense, it was a good night for the Democratic party: The candidates resisted the temptation to get into a tit-for-tat shouting match. On the other hand, anyone who is going to beat Trump has to demonstrate some toughness and a bare knuckles debate might have given some insight there.  Normally, only two or three candidates earn a ticket coming out of Iowa, but this year — and based on last night's debate — it is conceivable there will be four tickets: Biden, Buttigieg, Sanders and Warren. The same four could also punch their tickets in New Hampshire. Barring the banana peels strewn along the path of all campaigns, for the first time last night a thought occurred: Nevada may be the contest that first separates the winner from the rest of the field. And, it is anybody's guess who is going to win Nevada! Never a dull moment.