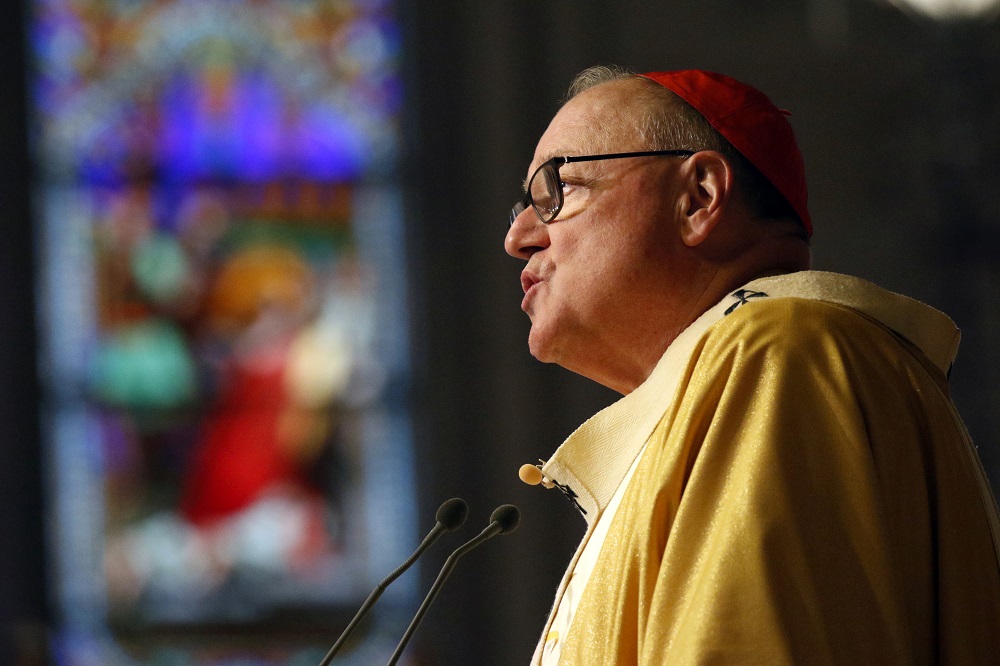 The archbishop of New York, Cardinal Timothy Dolan, announced he was resigning as the spiritual leader of the "capital of the world" in order to dedicate all his energies to his new position as co-chairman of the Committee to Re-elect the President. The resignation has yet to be accepted by Pope Francis, but there is little doubt the Supreme Pontiff will grant Dolan's request to be relieved of his spiritual duties.

Sources close to the campaign said they had intended to announce the job shift by the 70-year old prelate later in the year. But it became obvious over the weekend, after a phone call between Catholic leaders and the president, followed by an ingratiating homily by the cardinal Sunday morning, that the news was likely to leak any moment.

"The cardinal was supposed to keep this hush-hush until the summer, but he just couldn't contain himself on that call, effusively praising the president," a source close to President Donald Trump told NCR. "We thought those on the call, at least the clergy, would all spit out their coffee when the president called himself 'the best [president] in the history of the Church,' " the source said, "but apparently they all got lessons from the president's coronavirus response team about keeping a poker face when the president says something outrageous. I guess Dolan got confused by the poker reference and thought he needed to go 'all in.'"

In a related development, in Seneca, Illinois, residents reported a strange sound emanating from the Mt. Calvary Cemetery. Upon inspection, police determined that the mortal remains of Msgr. John Tracy Ellis, who directed Dolan's doctoral dissertation, were turning over in the grave. Ellis, in his book American Catholicism, had written, "The overwhelming number of immigrants of the period — Catholic and non-Catholic alike — clung to their ancient customs while simultaneously they became loyal citizens and contributed labor and ideas to the country. Few will deny that the American cultural pattern has been the richer for it." One of those few lives in the White House.

This is a parody. Mostly. But the fact that the hierarchy of the Catholic Church is being roped into the president's reelection efforts is now obvious and it is not a parody.

The conference call on Saturday was initially conceived as an opportunity to address the issue of Catholic education during this time of national crisis. Only a few Catholic leaders were scheduled to participate but the list grew quickly and eventually some 600 people were on the call.

The president, unsurprisingly, acted on the call as he has conducted himself during the daily press briefings about the coronavirus: as if it was a campaign event. He reportedly took credit for the inclusion of Catholic schools and parishes in the paycheck protection program passed by Congress, although Democratic leaders in the Congress were also pushing for such inclusion. The bills passed by nearly unanimous margins in both the House and Senate. The president highlighted his pro-life policies regarding abortion but skipped over his anti-life and anti-family policies towards immigrants.

None of the bishops apparently spoke up to defend the rights of immigrants, many of whom are exceedingly vulnerable to the spread of contagious diseases and are afraid to come forward and seek medical treatment because of their immigration status. True, many immigrant children attend the Catholic schools the call was designed to help, but in dealing with Trump, the U.S. bishops have become like Neville Chamberlain, convinced that they can bend the tyrant to their purpose with sweet reasonableness and good intentions.

Any doubts that the president hijacked what was to have been a policy call and turned it into a campaign event were dispelled by Cardinal Dolan's sermon on Sunday. He noted that the president had announced his intention to watch the 10:15 a.m. Sunday Mass via livestream, and Dolan cited St. Paul's admonition to pray for civil leaders, "in these trying days especially, as one nation under God." He mentioned that there are "a lot of disagreements in our country as there is in any vibrant democracy," overlooking the fact that the president steadfastly refuses to serve as a point of national unity, and that the disagreements we face on account of the president’s leadership — for example, whether or not to drink bleach in the hope that it would cure the virus — these are not disagreements other vibrant democracies face, only ours.

Coming on the heels of a presidential call with a variety of religious leaders to discuss how they could help the nation cope with the virus, in which Crux reported the president actively sought the clergy's political support, Cardinal Dolan's effusive praise on the call Saturday is clearly part of the reelection effort.

Politico is reporting that other Republican candidates are getting nervous about Trump's sagging poll numbers. Turning to Catholic leaders is a natural step to take to bolster the president’s campaign. Catholic media has been enlisted as well. Raymond Arroyo helpfully spent much of his show last Thursday attacking China in an interview with Cardinal Joseph Zen. Zen attacked Pope Francis as much as the Chinese Communist government, but that is to be expected. The alignment of conservative white Catholics with Trump not only parallels dislike for Pope Francis, the two are linked in all manner of unhealthy, un-Catholic ways.

I have a bit of advice for the U.S. bishops: Stay away from the president. Avoid getting mentioned in any article that mentions him. Talk to his staff, as is necessary, but know that he himself will always coopt any event and any person into his own psychodrama. You will become a political pawn in his game because he is incapable of any other mode. His moral framework is reptilian and any association with him will end up burning you. And Cardinal Dolan? If you can't be more discriminating about your former neighbor, maybe you really should look for a new neighborhood.