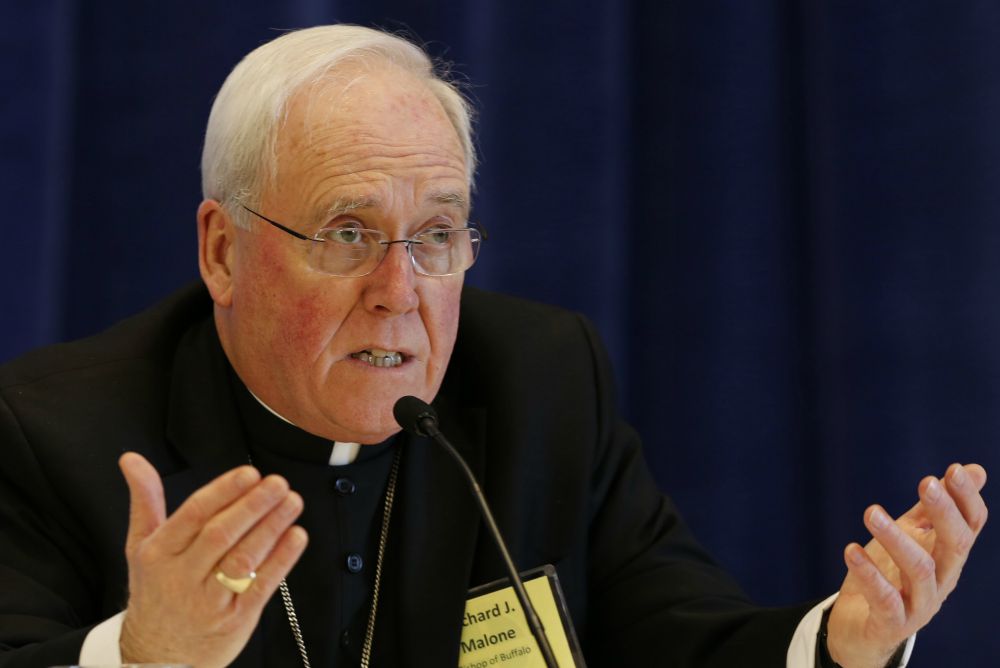 Monday, the Catholic Herald reported that New York Cardinal Timothy Dolan was preparing to make an announcement regarding Buffalo, New York, Bishop Richard Malone. "[Cardinal Dolan] has been following the situation very closely, and has been consulting extensively," Joseph Zwilling, longtime communications director for the New York Archdiocese told the Herald by email. "I would anticipate that we will hear something within the near future regarding this matter," he concluded.

Malone has been embattled since last year when, on "60 Minutes," his former secretary, Siobhan O'Connor, alleged Malone covered up cases of clergy sex abuse and provided documents that supported her allegation. Malone has denied the allegations.

This summer, there was a series of charges and counter-charges involving Malone's handling of what he himself deemed a "love triangle." Malone removed a pastor whom a seminarian alleged had made unwanted sexual advances on him, but a love letter from the bishop's priest secretary to the same seminarian raised the possibility that the pastor was taking the fall. The priest secretary is now on a leave of absence as well.

The situation in Buffalo has unfolded at the same time as the universal church, under the leadership of Pope Francis, has finally taken steps to hold bishops accountable not merely for any sexual abuse they commit, but also for covering up the abuse of others. In May, the Holy Father issued the letter "Vos estis lux mundi" on his own initiative (motu proprio) that accorded metropolitan archbishops responsibility for conducting investigations into suffragan bishops against whom an allegation has been made. In a first for the ever-slow Vatican, the new law contained deadlines: Once the metropolitan requests authority to conduct an investigation, the relevant dicastery in the Vatican curia has 30 days to respond, and then the metropolitan must file a monthly report and complete the investigation within 90 days.

The clock only starts ticking — and the accountability measures only become concrete — when the metropolitan requests authority to conduct the investigation. Article 10, Section 1, states: "Unless the report is manifestly unfounded, the Metropolitan immediately requests, from the competent Dicastery, that he be assigned to commence the investigation. If the Metropolitan considers the report manifestly unfounded, he shall so inform the Pontifical Representative." It is a great relief to realize Dolan is apparently now recognizing the legal force of the adverb in that section: immediately.

Just last week, the archdiocese seemed far more equivocal about the situation in Buffalo. "Neither the Nuncio [papal ambassador] nor the Holy See have asked, to date, for Cardinal Dolan to take any action regarding Bishop Malone and Buffalo," Zwilling told Crux, even though Vos estis puts the burden on the metropolitan, not the nuncio, to start an investigation. "He has been following the situation there closely, since, for a year, some thoughtful clergy and lay leaders have been in touch with him about it. He has also benefited from frequent contact with Bishop Malone."

That seeming equivocation was worrisome. Vos estis took effect June 1, and based solely on the evidence contained in the "60 Minutes" program, there was sufficient cause to ask the Vatican for permission to begin an investigation on June 2. I asked Zwilling if anything had changed over the weekend to explain the change in tone. "No change between the two statements," Zwilling emailed me. "Cardinal Dolan is very aware of his responsibilities under Vos estis lux mundi. He has been following the situation closely for over a year. He has been consulting extensively." Zwilling has always been straight with me, so I take him at his word, but I would not be surprised to learn the nuncio urged the cardinal to take concrete action over the weekend.

The bishops have to realize, to paraphrase Benjamin Franklin in an entirely different context, they must all hang together or they most assuredly will hang separately. Put differently, you do not need two skunks to stink up a room, only one, and unless the metropolitan archbishops are seen to be prompt and just in exercising their responsibilities, the credibility of the entire hierarchy will be further eroded — and there is not much left to erode.

In addition to the new accountability measures contained in Vos estis, we should remember the earlier motu proprio "Come una madre amorevole," issued in 2016. There, the pope used quite expansive language to justify the removal of a bishop from office:

The diocesan Bishop or Eparch, or one who even holds a temporary title and is responsible for a Particular Church, or other community of faithful that is its legal equivalent, according to can. 368 CIC or can. 313 CCEO, can be legitimately removed from this office if he has through negligence committed or through omission facilitated acts that have caused grave harm to others, either to physical persons or to the community as a whole. The harm may be physical, moral, spiritual or through the use of patrimony.

That section came to mind when I heard the newly released audio of Malone worried mostly about his own hide, that the revelations concerning the love triangle "could be the end for me as bishop."

There may be false accusations against a bishop who is unpopular for other reasons, to be sure: If he is exonerated, the church must go to all lengths to demonstrate that the bishop has been found innocent, and he should be confirmed anew in his office.

Two months from today, the U.S. bishops will commence their plenary meeting in Baltimore. Going simply on the documentation in the public record, there is sufficient reason to remove Malone as bishop of Buffalo, and the Vatican and Dolan should see if they can't achieve that before that November meeting. Otherwise, who will believe the metropolitan model is actually working?