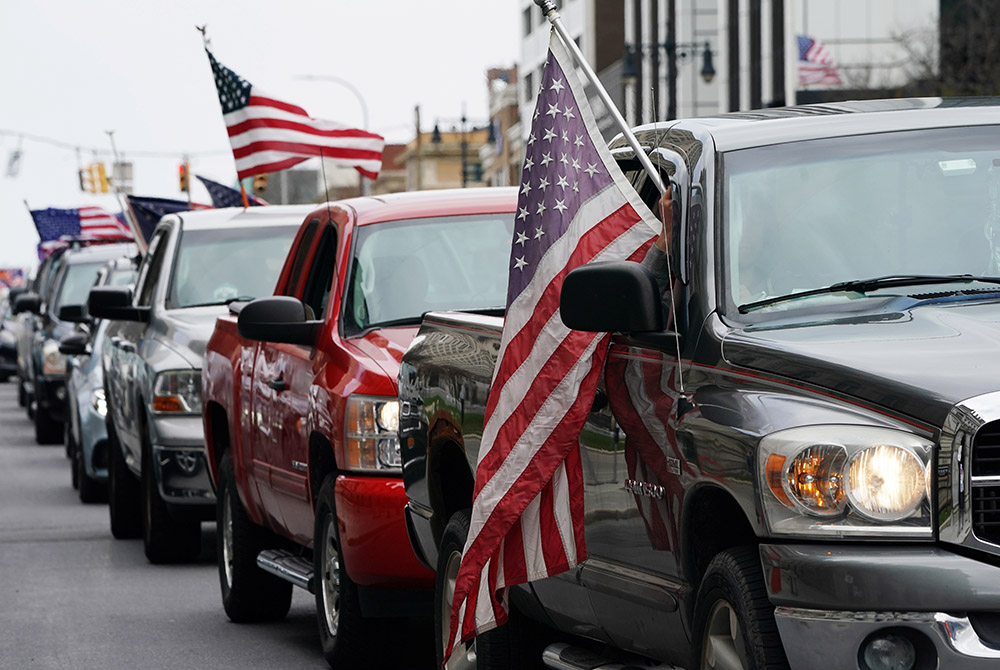 When I first opened the pages of Cathleen Kaveny's book Ethics at the Edges of Law: Christian Moralists and American Legal Thought, I had not anticipated that the nation would, on account of the coronavirus, be forced to confront some of the most foundational issues of law and culture. Watching these libertarian Tea Party activists wave their Gadsden "Don't Tread on Me" flags as they climb the steps of their state capitols, protesting public health restrictions as infringements of their civil liberties, it is easy to dismiss them as yahoos, incapable of admitting that their dream of untreadable autonomy is a nightmare already attained in the anarchy of a country like Somalia. But here we are. 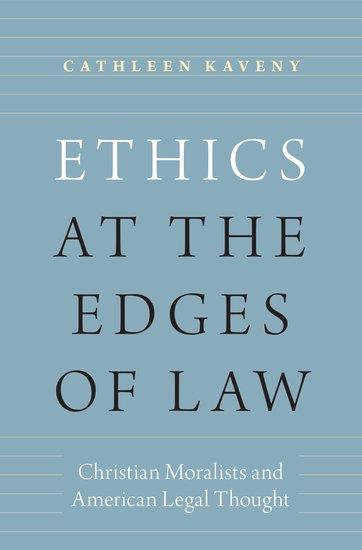 "Interdisciplinary" is one of those catchy words, not quite jargon, that academics like to invoke which really do not mean very much. If you are organizing an academic conference, you might bring together an historian with an economist and a theologian and each will look at a particular issue from their vantage point, but there is no real effort at, nor aptitude for, synthesis. Ours is an age of hyper-specialization, which makes interdisciplinary efforts difficult and they often yield nothing but mush. If there is any cross-pollination, it occurs amongst the audience members who may, or more likely may not, allow that interdisciplinary discussion to cause them to embark on an intellectual path that might otherwise have remained untrod. Meanwhile, academics must attend to increasingly minute topics and subtopics, generating peer-reviewed articles for the Northeast Minnesota Ecclesiastical Review that will be read by few in their own field and precisely no one outside it. Interdisciplinary scholarship has been a phantom.

Until Cathleen Kaveny came along. The Boston College theologian and law professor's book brings Christian moral theologians such as John Noonan, Stanley Hauerwas, Paul Ramsey and Mercy Sr. Margaret Farley into dialogue with the American legal tradition. The result is not amorphous at all but, instead, a dialogue that yields real insights into the lessons moral theologians can learn from your local courtroom. It is less clear that the mutual enrichment works as well in reverse. And, as the politics of the pandemic has shown, it is not just at the edges, but at the foundations of law that we need to consider ethics and the demands on humankind our moral aspirations require. 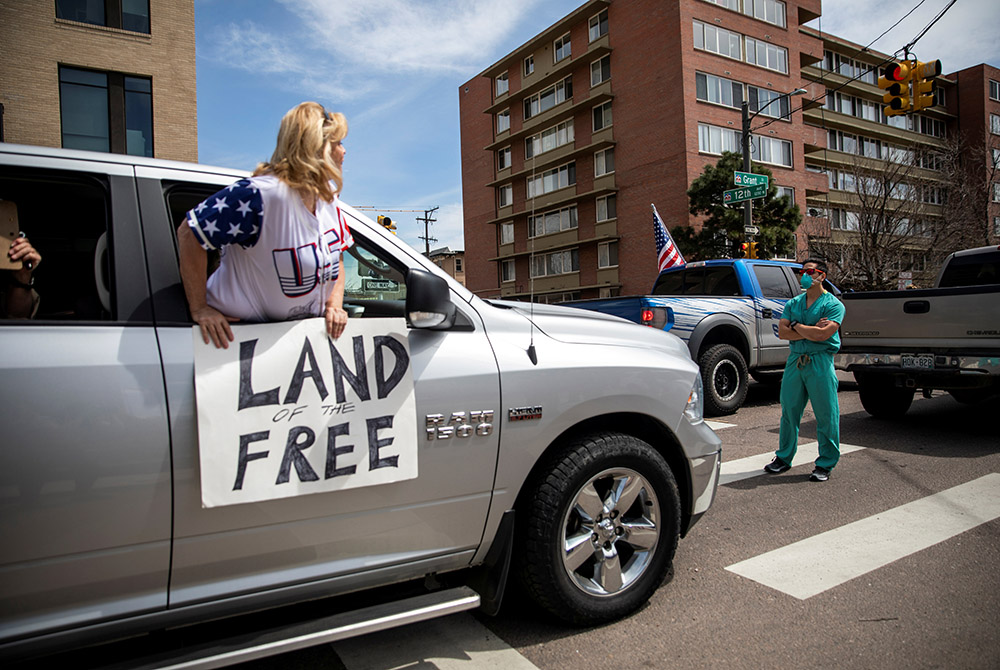 A health care worker in Denver stands in the street as a counterprotest to hundreds of other people who gathered to demand the stay-at-home order be lifted April 19 during the coronavirus pandemic. (CNS/Reuters/Alyson McClaran)

Let's look in detail at how Kaveny begins the book to discern her method. She credits one of her mentors, John Noonan, for his part in reintroducing the idea of historicity into Catholic ethical thinking in this country with his seminal work on the development of Catholic moral teaching about usury in the medieval period. In a word, that teaching changed. This was news to the Neo-Scholastic moral theologians of the mid-20th century whose syllogisms floated above history, providing certainty if little else.

Noonan's impact on Kaveny is clear: "We manifest our fidelity to the persons of the past not in slavish repetition of old formulas but rather in sensitively attempting to discern the core purposes of traditional doctrine and in creatively applying it to a new situation," she writes. "Such a process requires us both to understand and to judge our predecessors. In sifting through their thought, we must separate insights of enduring value from the rough bundle of time-bound presuppositions and failures of will and vision that trap them." The Noonanesque (and Newmanesque) echo is clear as a bell.

Moral theologians and judges must both consider the necessity of rules and societal norms as well as the particular situation of individuals in coming to a judgment about a particular act. Noonan had examined Judge Benjamin Cardozo's ruling in one of the most famous tort cases in history, Palsgraf vs. Long Island Railroad. Noonan criticized Cardozo's decision in which he not only ruled against the impoverished mother of three, but required her to pay the court costs for the railroad. Kaveny agrees that the decision deserved criticism, but comes at the issue differently from Noonan:

Criticizing Cardozo's failure to address the issues of social justice raised by the case, he locates its source in Cardozo's inability to see the persons standing before his bench. But to adopt this construal of responsibility toward persons would begin to blur the distinction between respect for persons and regard for impersonal rules that Noonan wants to maintain. To talk about precedent and the more generalizable features of persons' lives is to begin to talk about rules again, albeit fairly specific ones. If the objection to Cardozo's opinion is not so much that he failed to attend to Mrs. Palsgraf's particular troubles but to the more general feature of her social status, why not say that Cardozo articulated the rule of tort law in an unjust fashion?

Kaveny presses further, noting that Noonan's wrestling with "the simultaneous merciful favor and just judgment of God" might elucidate some of the tensions his legal approach poses in this work. Citing Noonan's essential conception of Christian ethics as a matter of imitating Christ, Kaveny begins with a foundational observation: "First, since the relation between Christ's power as impersonal judge and his personal love as savior is ultimately a theological mystery, we cannot expect to work out its ethical implications in a fully systematic way." Think of how differently the debate regarding Pope Francis' apostolic exhortation Amoris Laetitia would have been if this observation had been stipulated by all concerned. Secondly, "when God's impartiality is set aside in the Bible, it is set aside on behalf of the weak."

The third conclusion is the one most challenging to more traditional ethical approaches: "divine mercy and judgment are ultimately focused on each person in all her individuality." The legal corollary from this ethical postulate is clear: "[N]o matter how sensitive a rule or category might be to general features of human need, earthly judges can never afford to ignore the particularity of the person standing before them. In the end, if a judge must err, it is better to do so in favor of the person rather than the rule. Equity trumps law."

Having examined how Noonan's ethical training affects his jurisprudence, now Kaveny looks at the opposite flow, how lawyerliness can and should affect Christian ethics, using Noonan's work on usury and contraception as a touchstone. She posits two core conclusions, the first that "legal argument is advocacy, not only of a particular conclusion or result but also of a certain way of viewing the world that supports and surrounds it … a truly excellent legal brief does not merely compile evidence but also proposes a vision of reality (or at least that portion of reality which is in dispute) that is more complete and compelling than the vision offered by the opposition."

Her second conclusion is less foundational and more cultural, but also sheds an interesting interdisciplinary light on these human conundrums. "[T]he fact that legal argument is oriented toward achieving a certain practical result for one's client means that the way lawyers approach authoritative sources differs from that of many scholars. … [T]he dominant question for a lawyer is not what to say to a controlling opinion, but what to do with it." The distinction is not small. "The opinion, itself one word in the continuing conversation of law, provides the raw material and the framework that enable the lawyer to exercise both creativity and judgment in proposing the next word. Some purposes are emphasized, some phrasing borrowed, other elements are downplayed or marginalized." This lawyerly approach allowed Noonan to amend his book on contraception after Pope Paul VI issued the encyclical Humanae Vitae in 1968, but to do so in such a way that he still found more possibilities for the development of doctrine than some more conservative ethicists discovered in that same encyclical.

Along the way, Kaveny's arguments are happily littered with piquant observations. "The burgeoning literature on the development of moral doctrine conveys the impression that the concept of 'development' itself is the theological equivalent of nuclear energy — acknowledged by all as a powerful and potentially helpful tool in theory, but intensely feared by some as dangerous and even deadly in practice," she writes. Or this: "Yet an unwelcome by-product of the salutary expansion of the field of moral theology has been the loss of a common canon that characterizes the field, or a common set of sensibilities that characterize its practitioners." Or this; "The culture wars in the Catholic Church have meant that the concern about the coherent practice of the discipline of moral theology has become too narrowly focused on the 'bottom-line' positions people hold." Each one of these sentences invites further reflection and development.

I shall conclude the review on Monday.