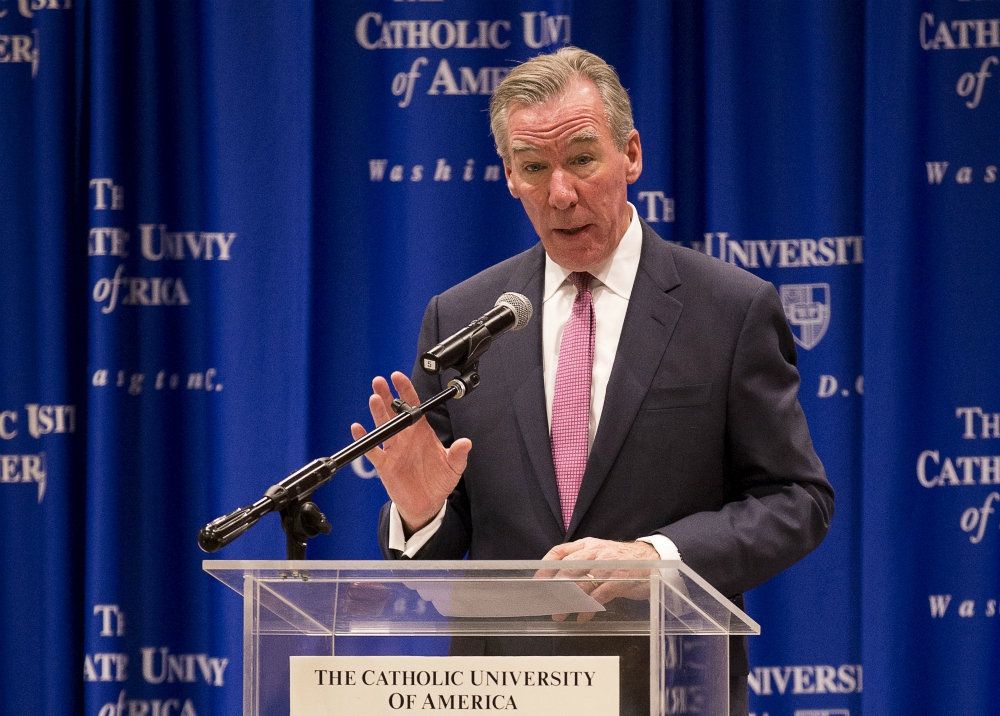 Tonight is the annual Cardinals Dinner, a fundraiser for scholarships at the Catholic University of America. It is a festive evening, and not the kind of event at which the principals get to discuss business. But if, say, the cardinals find themselves in the sacristy before Mass and they have a moment, they should ask themselves a question: How do we save this university?

The sad fact is that the Catholic University of America is ill, and the only issue is whether the illness is terminal.

Also last week, we learned that an overwhelming number of faculty voted their lack of confidence in both President John Garvey and Provost Andrew Abela. The vote is not binding in any contractual way but is further evidence of problems at the school.

Last month, I called attention to an essay at Commonweal by Professor Julia Young that demonstrated what a special place Catholic University once was and how badly misguided the current efforts at reform are.

And, last year, my former colleague Tom Roberts authored one of the best takedowns I have read in a long while, having attended a conference honoring libertarian sugar daddy Charles Koch that was co-sponsored by Catholic University's Tim & Steph Busch School of Business and Economics and the Napa Institute. Normally, the right wing would throw a fit when a Catholic university honors a pro-choice, pro-gay-marriage public figure, but Koch gave $10 million to the business school, so no outrage was forthcoming from the right-wing bleachers.

Catholic University has lost its way. The school has always had a unique place in the landscape of Catholic higher education. It is the only pontifical university in the country. It was also founded as a research university, admitting only graduate students at first. It has long had a first-rate music school and architecture school, one of the nation's leading schools of social work, an outstanding politics department and a renowned drama program.

In recent years, however, it has succumbed to an agenda driven by conservative Catholics who wanted to emphasize the school's Catholic identity. I also think our Catholic universities should emphasize their Catholic identity, but precisely because of what I learned as a student at Catholic University, I understand how rich and varied that identity is. As an undergraduate, taking all the required courses — four theology, four philosophy, four sciences and four humanities outside my major — I was acquainted with the different ways of knowing. As a seminarian, I came to understand the intellectual rigor of our Catholic theological tradition.

After leaving seminary, I stayed on for three years of graduate study in church history. Although I never took my comps or wrote a dissertation because I had realized I did not want to pursue a career in the academy, those three years ignited a passion for reading about the history of the church that has never left me.

Sadly, the Catholic identity on offer today is more akin to what earns you an endorsement from the poorly named Cardinal Newman Society. Garvey introduced single-sex dorms, as if that would cut down on the hookup culture on campus. He should go to the weight room some Monday and listen to the football team discuss their conquests.

In the long shadow of the fiasco surrounding the removal of Fr. Charles Curran, the theology department has moved steadily to the right, and while there are happy exceptions, professors convinced of their own orthodoxy can publicly assert the pope is committing material heresy.

Getting approval for a liberal Democrat to speak on campus is arduous but a libertarian like Koch can be feted for three days. And then there is the business school.

The nonsense on stilts being peddled by the Catholic University business school is something altogether different. It is trying to baptize libertarian, laissez-faire economics, and it cannot be done.

The celebration of Charles Koch was not an aberration, it was par for the course. At this year's iteration of the business school collaboration with the Napa Institute, the featured speakers include George Gilder, champion of Reaganomics; Arthur Brooks, who is stepping down as head of the American Enterprise Institute; and Jay Richards, whose Twitter handle used to be "@freemarketjay" and who hosts a smarmy pro-business TV show on EWTN. I was on a panel with Richards and Garvey at the libertarian Cato Institute in advance of Pope Francis' trip to the U.S. The results were not pretty.

The theme of this year's Catholic University/Napa Institute conference is the "dignity of work," but there is not a single labor leader listed. This is their modus operandi: Take a theme from Catholic social teaching and distort it to suit the political agenda of the Tim Busches and Carl Andersons of the world. But I would sooner turn to Roseanne Barr for a balanced presentation on race relations than I would look to the Busch School of Business and Economics for a balanced presentation of Catholic social doctrine.

After the 2008 economic meltdown, many colleges hit hard times, especially those like Catholic University where law school admissions dried up, depriving the school of one of its cash cows. The business school seemed an answer to its admissions prayers as enrollment quickly shot up.

But the leaders of the university spent so much time highlighting the new business school, they forgot to remind prospective students about the wonderful music school or architecture school or drama program, and so admissions across the entire university began to slow and, eventually, they leveled off at the business school also. That is what brought the university to its present financial crisis.

To be fair, the school has never been fiscally healthy since Bishop Thomas Shahan hypothecated the university's endowment in 1914 as part of fundraising for the National Shrine. Previously, the school had a healthy endowment from the Caldwell sisters, who were wards of the school's real founder, Bishop John Lancaster Spalding of Peoria, Illinois, who was prevented from becoming archbishop of Chicago when it was disclosed he had fathered a child with one of the Caldwell girls!

Catholic University is owned by the bishops as a whole and the U.S. cardinals form a board with reserved powers. As they gather tonight to raise money for the school, I hope they take the occasion to begin thinking about what drastic steps are needed to turn the university around. More on that Wednesday.