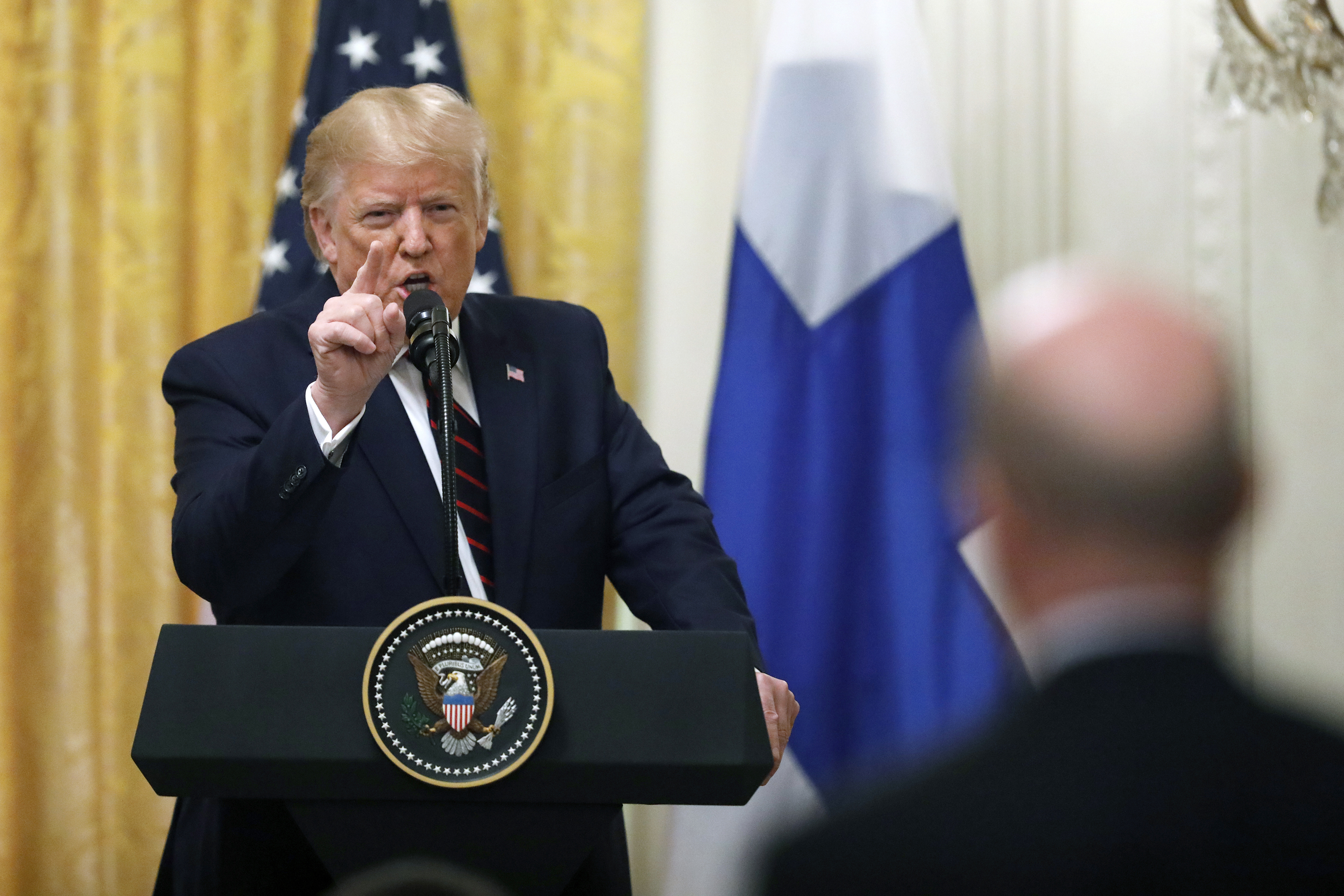 President Donald Trump speaks during a news conference at the White House in Washington, on Oct. 2, 2019. (AP Photo/Carolyn Kaster)

The impeachment clock is ticking. Every night, cable news anchors lead their show with charges and counter-charges. Panels of partisans, some of them also experts, are brought in to analyze each new development in the saga. But, what we are seeing is, at root, confirmation of that most evident of Christian doctrines, the only one which really requires no act of faith, only an act of observation: original sin.

Of course, all politics evidences original sin in varying degrees. Our founding fathers, concerned to prevent any sort of tyranny, relied on various devices like the separation of powers to create shifting majorities and to harness self-interest towards a sort of mutual advancement. Self-interest is not a Christian virtue. Even the best politicians must lie at times. Deceit violates an explicit commandment. But, what we see with President Donald Trump and his cast of sycophants and co-conspirators — some of them beginning to flee the sinking ship on advice of counsel — is a rare thing: All seven deadly sins on display at once.

Greed has long been a motivating factor in Trump's life. In his pre-political days, he was mostly greedy for money and fame. Now that he is president, he is still greedy for money. Why else propose hosting the G7 summit next year at his Trump National Doral resort near Miami, a summit scheduled to take place in June when Miami is hot and muggy? His greed now also extends beyond money. He wants power, and the more of it, the better. He sometimes gets the crowds at his rallies worked up by promising he will serve more than two terms. Certainly, nothing he has done in office would indicate a willingness to acknowledge constitutional limits on his power.

Which leads to lust. Forget about the usual focus of lust: We heard about his libido and the gross excesses to which he thinks himself entitled in that regard on that horrible tape. That is Melania's worry, not mine. It is his lust for power that worries me. I am per se suspicious of these businesspeople — Michael Bloomberg, Howard Schultz, Tom Steyer, Carly Fiorina — who think their success in the world of business somehow equips them for political leadership. That kind of ambition is difficult to constrain. In Trump's case, he claims other people's victories as his own just as he runs from responsibility when an ally loses, as happened Tuesday night in Kentucky's gubernatorial contest. And, what but a lust for power would have led him into this Ukraine quagmire?

The evidence of gluttony is an extension of his greed and lust for power: He not only wants power, he can't get enough of it. Never enough money. Never enough women. Never enough wives. Like all gluttons, he leaves a mess in his wake: Instead of discarded bones, there are discarded workers and ruined investors. Yesterday, I linked to a story about his dealings in Atlantic City. Did he harbor any sense of responsibility, even a sense of remorse that he and his fellow casino owners never diversified so that when the gambling business went South, Atlantic City and its workers were laid low? Nah. "I had the good sense to leave Atlantic City," he said in the first GOP debate. "I left Atlantic City before it totally cratered, and I made a lot of money in Atlantic City, and I'm very proud of it." The glutton cares only for his own needs: If denying arms to Ukraine harmed that fledgling democracy and aided Mother Russia, it is no concern of his.

Another sin that emerges from both his business dealings and his presidency is sloth. None of his businesses ever made anything except money. Henry Ford built cars. Thomas Edison invented things. Trump is a PR guy, selling nothing but himself, a carnival barker who struck it rich. I suppose there is a kind of genius at work there, but it is an evil genius. As president, he famously can't be bothered reading his briefing papers. Like a 2-year-old, whatever information aides need to impart must be done orally. He criticized President Barack Obama for playing golf too much but, as of Oct. 26, Trump had 224 golf outings as president. The estimated cost to taxpayers? Over $100 million. Are you tired of winning, America?

With all his accomplishments, such as they are, why would he be envious? I do not think you need a degree in psychology to recognize a certain insecurity in the way he constantly tries to compare himself favorably with his predecessor. In the past five months, he has averaged a Twitter mention of Obama in 2.4 tweets per day. The number of times he has mentioned Obama in 2019 has gone up significantly over 2018. It must be envy, because it surely is not very smart. With all the non-stop drama surrounding this White House, who does not feel a yearning for "No Drama Obama"?

I predict that we will see more and more wrath in the coming months as more and more Republicans find it in their political interest to distance themselves from Trump and his corrupt presidency. When Sen. Mitt Romney expressed concern about the president calling on Ukraine and China to help dig up dirt on his political opponents, the president turned to Twitter to vent his rage: "Mitt Romney never knew how to win. He is a pompous 'ass' who has been fighting me from the beginning, except when he begged me for my endorsement for his Senate run (I gave it to him), and when he begged me to be Secretary of State (I didn't give it to him). He is so bad for R's!" The sophomoric quality of the insults only partially masks their venom. (And, sometimes, their veracity: Romney really did beg to be Secretary of State.) I pray to God that I shall live to see the day when Sen. Lindsay Graham breaks with POTUS. I have no use for either of them, but the display of raw emotion would be worth it.

Finally, we come to the deadliest of the seven deadly sins, pride. "I alone can fix it," he famously said at the Republican National Convention. The examples are too numerous to count. What astounds, really, is that Trump's pride is the pride of the con man. He is proud of his ability to make people think he is a man of abilities when he really is a man of few gifts beyond those we associate with showmanship.

One of the reasons pride is so deadly is because it is impossible to attend to its opposite virtue. If we are greedy, we can seek to be more generous. If we are gluttonous, we can concentrate on becoming more abstemious. But, if you try and focus on being more humble, as soon as you attend to your own humility, it melts like a snowflake in the hand. We learn humility on the hard anvil of suffering. God, in his providence, chastens us to make us humble. Let us hope that in this impeachment process, Mr. Trump will come to know humility as he never has before. He may lose his office, but he might just save his soul.