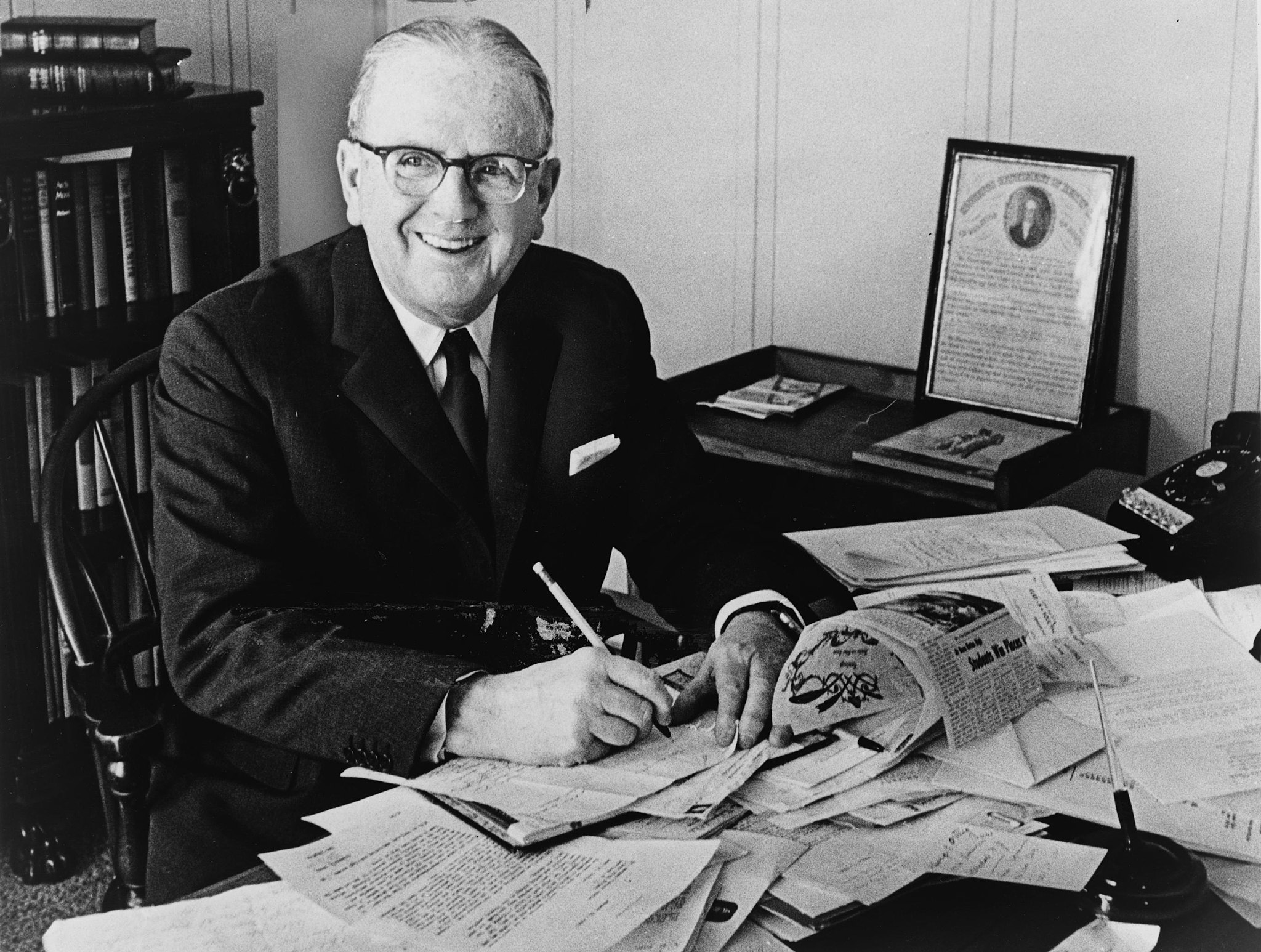 The Rev. Norman Vincent Peale, seen here in 1966, was named by Jesuit Fr. Antonio Spardaro and Rev. Marcelo Figueroa, a Presbyterian minister, as one of the orginators of the prosperity gospel. (Wikimedia Commons/World Telegram/Roger Higgins)

Jesuit Fr. Antonio Spadaro and Rev. Marcelo Figueroa are at it again. Last year, their provocative essay, "Evangelical Fundamentalism and Catholic Integralism: A Surprising Ecumenism," caused all manner of discomfort to religious Americans by forcing us to confront the reduction of religion to ethics and thence to politics that had become so dominant in our culture. Now, with the publication of "The Prosperity Gospel: Dangerous and Different," they are stirring up trouble again. Happily.

Right out of the box, they level their indictment against the prosperity gospel's theology: "The risk of this form of religious anthropocentrism, which puts humans and their well-being at the center, is that it transforms God into a power at our service, the Church into a supermarket of faith, and religion into a utilitarian phenomenon that is eminently sensationalist and pragmatic," they write. Indeed, it is almost a category mistake to call this theology. It is a projection of our most crass and materialistic desires onto the Godhead.

One of the reasons that Spadaro and Figueroa rile so many on the right is that they eschew the false politeness that regrettably characterizes too much writing on the Catholic left. So, when they catalogue the many and varied sources of the prosperity gospel and they come to Norman Vincent Peale, they write straightforwardly that he "gained an enormous following with his books whose titles speak for themselves: The Power of Positive Thinking, You Can If You Think You Can, A Guide to Confident Living. Peale was a successful preacher and managed to mix marketing and preaching." Speak for themselves, indeed.

Interestingly, while they earlier cite President Trump and how his invocation of "the American Dream" dovetails with the prosperity gospel in significant ways, the authors fail to note that the Trump family began attending Peale's Marble Collegiate Church in the 1950s precisely because they warmed to his preaching. Peale presided at Trump's first wedding and his successor did the honors at Trump's second wedding. Now, as then, I render the same verdict that Adlai Stevenson rendered on Rev. Peale after the preacher warned against voting for John Kennedy because of his Catholicism. "Speaking as a Christian," said Stevenson, "I find Paul appealing and Peale appalling."

The authors, nonetheless, have done an admirable job collecting the observations of other theologians on the subject. My favorite comes from James Goff in Christianity Today who said the prosperity gospel reduces God the Father to "a sort of 'cosmic bellhop' that responds to the needs and desires of his creatures." Ouch.

Among the theological anchors of the prosperity gospel is a consequentialism rooted in an essentially Pelagian understanding of salvation. Their proof text for this line of thinking is Galatians 6:7 "Do not be deceived; God is not mocked, for you reap whatever you sow." But, as Spadaro and Figueroa point out, if the prosperity preachers and their flocks would just keep reading, they would encounter this — in the very next verse — in Galatians: "If you sow to your own flesh, you will reap corruption from the flesh; but if you sow to the Spirit, you will reap eternal life from the Spirit." Not for the first, nor the last, is preaching confused with cherry picking by some of our Protestant brethren. Thank God for the lectionary, which makes such proof texting more difficult.

Prosperity preachers also like to cite Deuteronomy 28:1-14, which lists the blessings God will bestow upon those who follow his commandments. This is the ground from which springs the prosperity gospel's understanding of covenant. Interestingly, Joseph Ratzinger, later Pope Benedict XVI, for whom the concept of covenant was also central, likewise turned to the 28th chapter of Deuteronomy as a critical text for his theology, but he focused on the verses that follow, in which God details the curses he will visit upon his people for their disobedience. Ratzinger, also, brought immense theological sophistication to his reading of these Hebrew Scriptures.

The part of this essay that will cause the most agita in certain circles is the linkage between "the American Dream" and the prosperity gospel, a linkage that the authors portray as essential — that is, it is hard to imagine the prosperity gospel getting its start in any other country — but in no way pre-determined. (Perhaps it is better to say in this context, predestined.) The authors do not mock the desire for a better life that has brought millions of people to America's shores. Catholic social teaching enshrines the belief in a living wage as well as the right of people to migrate when violence, including the violence of poverty, requires them to leave their homeland. Besides, the aspiration to "come to America" was always about "yearning to breathe free" and not just about wages; there was a spiritual component, a commitment to human dignity that was not in addition to the hope for a decent livelihood, but of which that concern for a decent livelihood was a part.

But the authors recognize that materialism creates its own appetites, and the acquisitiveness of American culture is the factual rock upon which the ideology of neo-liberalism is built. Further, the authors note that it is just a small step from seeing America as a providential nation to seeing God's providence in one's getting a bigger bank account. Indeed, you could say the prosperity gospellers are the ones who mock the spiritual yearnings that were also part of the American Dream with their materialistic reductionism and their sense that it is not enough to be working class, earning a living wage. Nonetheless, I predict that Spadaro's critics, and they are many, will exaggerate what he and Figueroa say here to paint them as anti-American, which they are not. 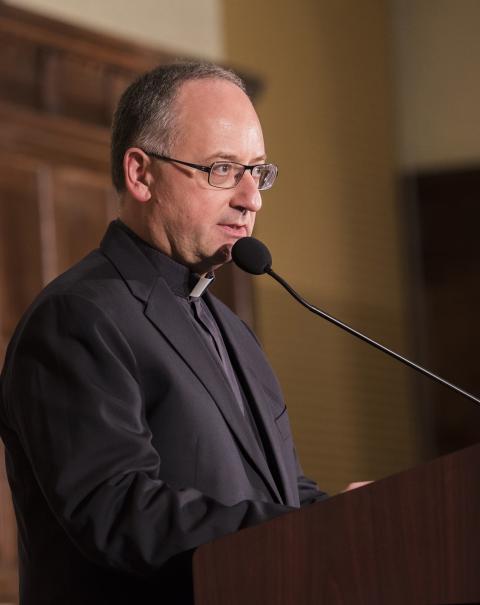 Another point of controversy will surely arise from this sentence: "In some societies where meritocracy has coincided with the socio-economic level without any concern given to the enormous differences in opportunity, this 'Gospel,' which puts the accent on the faith as a 'merit' to climb the social ladder, is unjust and radically anti-evangelical." Here they provide a religious reference to the argument put forward by Matthew Stewart about the meritocratic pretensions of America's new aristocracy.

Another point of contention will surround their argument about the political usefulness of this false Gospel to plutocrats everywhere. "So the risk is that the poor who are fascinated by this pseudo-Gospel remain dazzled in a socio-political emptiness that easily allows other forces to shape their world, making them innocuous and defenseless," they write. "The prosperity gospel is not a cause of real change, a fundamental aspect of the vision that is innate to the social doctrine of the Church." I am reminded of Chesterton's observation about the Catholicism remaining "a new and dangerous thing" while other ideologies have grown stale and passing.

More work needs to be done. I would like the authors to unpack this passage:

While Max Weber spoke of the relationship between Protestantism and capitalism in the context of evangelical austerity, the prosperity gospel theologians spread the idea of riches in proportional relation to personal faith. Without any social sense, and framed within an experience of individual benefit, this conception knowingly or unknowingly gives an extremist rereading of Calvinistic theologies of predestination. Soteriology is somehow anchored in time and place and is emptied of its traditional eschatological vision.

The issue is not just a collapsed eschaton. Part of what unites the Weberian diagnosis and the prosperity gospel is the thoroughly Protestant denial of the mediation of grace through relationships, that is, through the church, and, indeed, through creation itself. One of the most dangerous developments in Catholicism in the United States is the degree to which our spirituality has become Protestantized, in which the individual believer's relationship with Jesus is exalted at the expense of a more traditional Catholic ecclesial and sacramental spirituality.

I also would hope the authors will someday broaden their lens when they indict the prosperity gospel preachers for Pelagianism. "The vision of faith offered by the prosperity gospel is in clear contradiction to the concept of a humanity marked by sin with a need for eschatological salvation, tied to Jesus Christ as savior and not to the success of its own works," they write. Sadly, the same could be said of many liberal Catholic writers as well.

Spadaro and Figueroa are doing the church in the United States a great service. Sometimes we need observers from abroad to point out things that are too close for us to notice, or to see things from a vantage point that is foreclosed to those of us who are daily in the midst of the socio-cultural realities they comment upon. At a time when too much commentary from the Catholic left is dull and predictable, they provoke. Let the debate begin.

A version of this story appeared in the Aug 10-23, 2018 print issue under the headline: Spadaro and Figueroa rile the Christian right again in new essay.