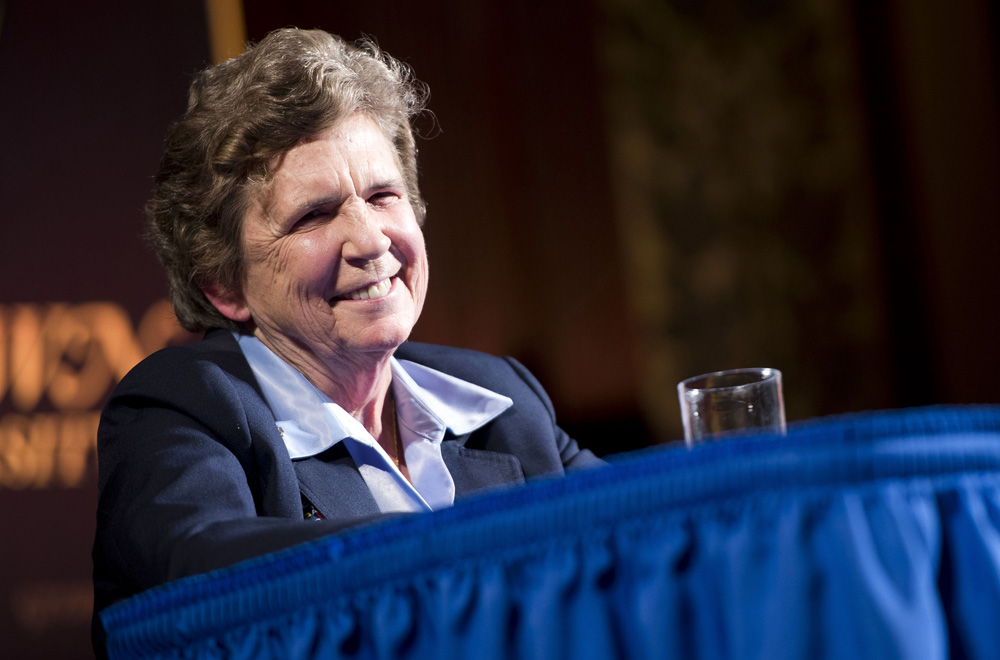 Last week, Daughter of Charity Sr. Carol Keehan announced her retirement as president and CEO of the Catholic Health Association or CHA, a post she has held since 2005. CHA will conduct a national search for a successor: There can be no real replacing Sister Carol.

I remember well the first time I met Sister Carol. It was the late 1990s and I had an assignment from the New York Times Magazine to do a short commentary about someone who lived in surprising circumstances. I talked this over with my friend, Msgr. Lorenzo Albacete, who said, "You must write about Sister Carol. She is the only CEO I know who lives in a one room cell like all the other sisters in her convent." He arranged a meeting at her office at the hospital. She was friendly, a little wary of someone from the press, although the Albacete seal of approval quickly overcame that. I remember her having several large volumes on her desk and her pointing to them and saying, "I got into this work because I want to help the poor. I found out that to really help them in this day and age I had to learn all about Medicaid regulations."

Later, I went to her convent in Bladensburg, near St. Elizabeth Seton High School. She lived, as Albacete had said, in one room, a bed and a desk. The closet had perhaps half a dozen identical outfits. We walked around the convent and she explained that whenever she could, she enjoyed cooking for the other sisters, a pastime she continues to this day.

The article never ran, but over the years we became friends. We would run into each other at Catholic events in D.C.: the annual party for the anniversary of the pope’s election at the nunciature, the episcopal ordination Mass for Archbishop Gus Di Noia, and meetings of the bishops’ conference. I learned that she was the first and only nun to be invited to Davos, and on more than one occasion. It is highly doubtful the Affordable Care Act would have passed without Sister Carol’s very public support, support that put her at odds with the bishops and earned her a tongue-lashing from a senior staffer at the conference that was so aggressive, more than one bishop has cited the incident to me as an example of how the culture warrior mentality consumed the fifth floor at the conference’s headquarters. President Barack Obama was more appreciative: He gave her one of the pens he used to sign the legislation into law. Sister Carol read a passage from the Hebrew Scriptures at the month’s mind Mass when my father died.

The healing ministry of Jesus is one of the most prominent themes in the Gospels. The Lord always seems to be curing people as he walked through life and so the church he founded must follow his example and do likewise. No one in this country has done more to continue that ministry than the Daughters of Charity, and no one Daughter of Charity has done more to bring that healing ministry to more people, and especially to more poor people, than Sr. Carol.

I am not the only person who thinks so. "I have always enjoyed working with Sr. Carol on so many important issues," Washington’s Cardinal Donald Wuerl told me in a phone interview last week. "I’ve appreciated her practical, real-life experience, her deep faith commitment, her hard-earned wisdom and her delightful sense of humor."

John Carr, who was working for the bishops during the Affordable Care Act battle and consequently found himself on the opposite side of the vote for final passage, could scarcely contain his praise for his friend. "I’ve known Sr. Carol as a young sister running the Center for Life at Providence Hospital in Washington and CHA’s President advocating health care for all, in our local parish and at the White House, wrestling with challenges of workers’ rights in Catholic Hospitals and religious liberty in health legislation," Carr wrote in an email. "She has always focused on the ‘least of these,’ not the rich and powerful, seeking care for those who are sick, poor or forgotten. She is a faithful disciple of Jesus, a courageous Daughter of Charity and an example of the Gospel in action where faith and health care, service and public policy come together."

Chicago’s Cardinal Blase Cupich noted that Sr. Carol is emblematic of so many religious women whose lives of service have witnessed to the Gospel throughout the history of Catholicism. "Sr. Carol represents the best of religious women, all of whom have served the church so well, often in ways that go unrecognized," Cupich told NCR last week. "And your story about her retirement is an opportunity to thank all of them."

When Sir Isaiah Berlin died, Leon Wieseltier recalled a line from the Talmud: "When a sage dies, all are his kin." Wieseltier pointed out that the rabbis were not answering a philosophic question but a practical one: Who was obligated to perform some of the rites of mourning? They answered that all in the community were obligated to rend their garments. I wish Sr. Carol many more years of contributing to the life of the church and the health of the poor in this country and around the world. If the pope were to start thinking about naming women cardinals, she would be at the top of my list. She is retiring; she has not died.

But, to borrow the rabbis’ insight, we can say: All those millions of Americans who benefit from the Affordable Care Act should bemoan her retirement. All those who are treated in our Catholic hospitals must regret her retirement. All those who care about the future of Catholicism, so tarnished and bloodied by the outrageous behavior of male clerics, must bemoan the retirement of a woman who made us proud to be Catholic. All who recognize the deficit of solidarity in this country, and the varied ways women religious counter that deficit with solidarity and humble service, should regret her retirement. One person, I hope, will not regret it and that is Sr. Carol herself. She has more than earned a bit of rest and relaxation, even if, as I suspect, she will still be cooking for her sisters whenever she can.