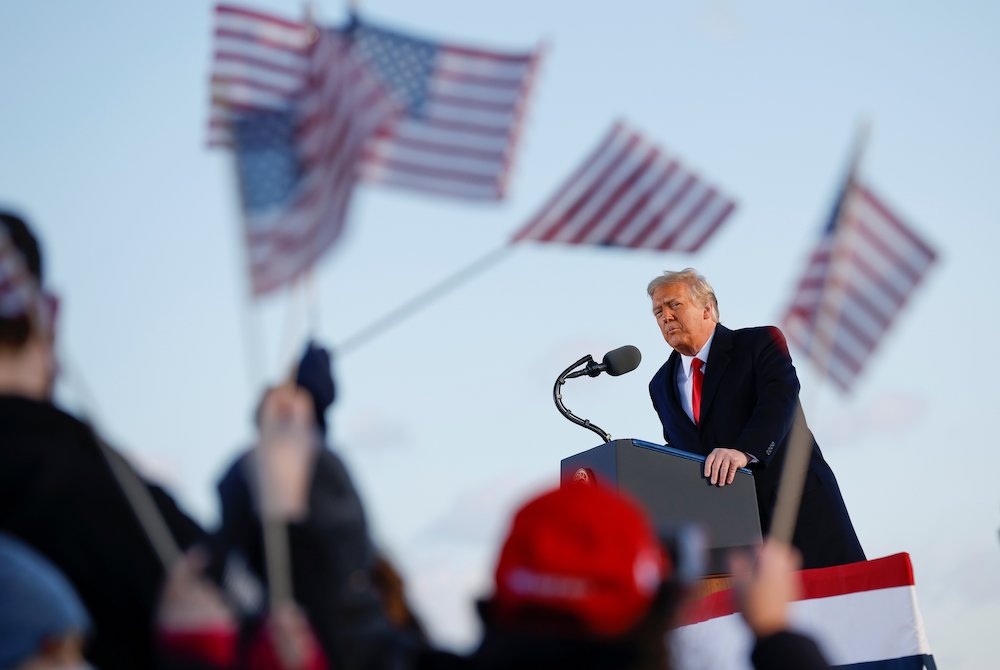 If the Republican Party goes the way of dinosaurs and bell-bottomed jeans, historians will name the month of January 2021 as the point at which the demise became irreversible.

By nightfall on Jan. 6, it was obvious to all that President Donald Trump's attempt to undermine the legitimacy of the election he had lost, and to overturn the result, was the kind of lie that could lead to violence. We know that, in part, because it did lead to violence.

The mob that attacked the Capitol building was quite clear in their intent: They planned to stop the Constitution from working, to arrest the certification of the Electoral College votes, to "stop the steal," as they put it. And, as we look forward to the start of next week's impeachment trial of Trump, it is important to remember this fact: If the election had been stolen, then the mob was right, wasn't it? If the election really had been stolen by the Democrats or by the elites or by Vice President Mike Pence, that would be treason. We have fought wars for less. That mob was a patriotic mob, if the election really had been stolen.

The problem is that the election had not been stolen. More than 60 court cases challenging different aspects of the vote count had all been tossed, often by judges Trump had appointed. Everyone in a position of responsibility knew this. Sen. Ted Cruz knew it. Sen. Josh Hawley knew it. House Republican Leader Kevin McCarthy knew it. Yet, even after the mob had stormed the halls of Congress, they still voted not to accept the electoral votes from Arizona and Pennsylvania.

Seven Republican senators who had planned to vote against accepting the Electoral College votes from those states changed their mind after the violence. Only four joined Cruz and Hawley in persisting in their objection. It seemed like finally the Republican Party was going to lance the Trumpian boil. It had only taken an armed assault on their chamber, the death of five people including a Capitol police officer, and a near-death experience for Pence to rouse the Republican Party from its trance, embrace the obvious truth and do the right thing.

Alas, the Senate vote was not what economists would call a leading indicator. It was the vote in the House, where 121 Republican members refused to acknowledge that Joe Biden had won fairly and squarely, that would indicate the path the GOP as a whole would take for the rest of the month and, possibly, forever.

What it was not was a profile in courage. There was a time when finding oneself on the losing end of an argument of state could end in you being deprived of your property, imprisoned or even executed. Falling afoul of a Tudor monarch or a Bourbon king or a Nazi party official was dangerous, so courage was required of those who wished to stand up against their oppressors. Trump is not in a position to cause personal harm to Republican members of Congress. They are only afraid for their political lives, not their actual lives. They do not want to face a primary opponent whom Trump supports.

The problem for Republicans is this: They do not know how much further off the deep end the former president will yet go. He is no longer surrounded by the apparatus of a White House staff. QAnon-spouting Congresswoman Marjorie Taylor Greene has said she will be meeting with the former president soon. Trump shook up his legal team one week before the impeachment trial begins, reportedly because the lawyers he ousted refused to relitigate the issue of election fraud.

It seems mainstream Republicans can't bring themselves to hold the former president accountable. All but five GOP senators voted last week to not even hold an impeachment trial. Remember the last impeachment? Sen. Susan Collins, explaining her vote to acquit the president, said she was confident he had "learned from this case." Really? What did he learn? Not to rely on Ukrainian politicians when you have a homegrown mob at hand? 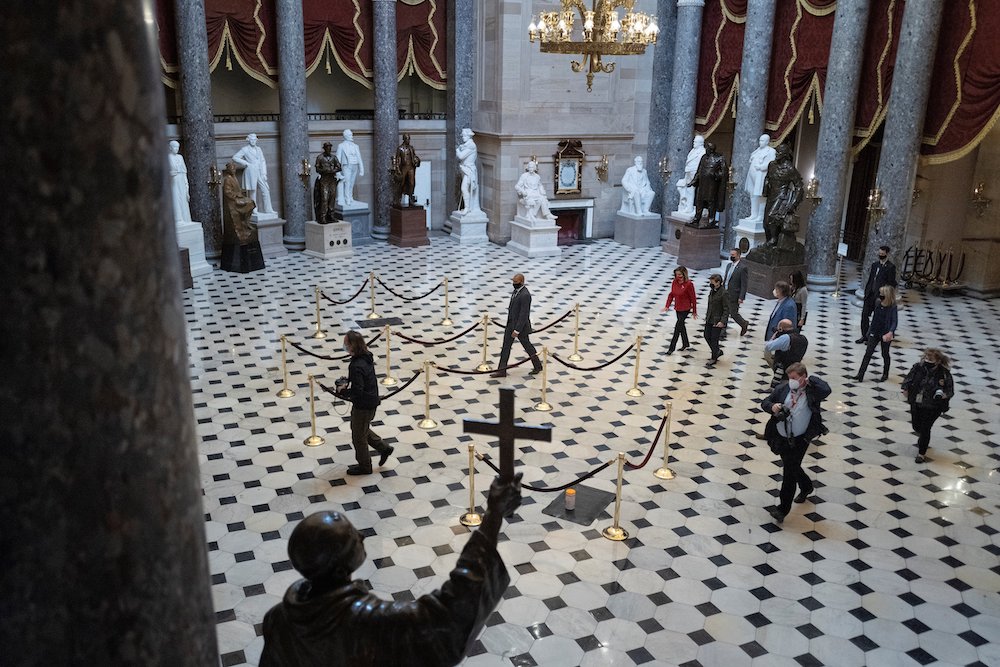 Speaker of the House Nancy Pelosi walks beside staff members and journalists through Statuary Hall of the U.S. Capitol in Washington Jan. 25, 2021. House impeachment managers delivered a single article of impeachment against former President Donald Trump to the Senate that same day. (CNS/Reuters/Tom Brenner)

On Jan. 6, then-Senate Majority Leader Mitch McConnell spoke on the floor of the chamber and asked his colleagues to proceed with the business of confirming Biden's election. He asked for an end to the craziness. He spoke forcefully, naming what Hawley and Cruz were advocating, the overturning of an election. He said there was no evidence of widespread fraud. The election had not been stolen. It was too little, too late. Minutes later, McConnell and the rest of the senators were forced to evacuate.

Monday night, now-Senate Minority Leader McConnell issued a statement condemning the conspiracy theories spouted by Taylor Greene. Yet he failed to mention the congresswoman by name. Admittedly, she is not a member of the chamber where he leads his party. I was glad he said it, but I am not convinced McConnell understands the need to break with Trump and Trumpism once and for all.

Politicians are famous for their willingness to shade the truth in order to preserve their power. I will stipulate that some Republicans, like some Democrats, think their vision of what the country needs is so necessary, so vital, and the alternative so dreadful, that maintaining power to enact that vision justifies at least a few lies and a few fibs.

That is no excuse now. No matter what Trump did that they liked, no matter the tax cuts and the judges and the tough stance against China, standing by Trump means coddling white supremacists and other domestic terrorists. Trump's attempt to subvert our democracy was so brazen, Republican leaders need to decide whether they are committed to the U.S. Constitution or to some Trumpian dystopia. They can't have it both ways.