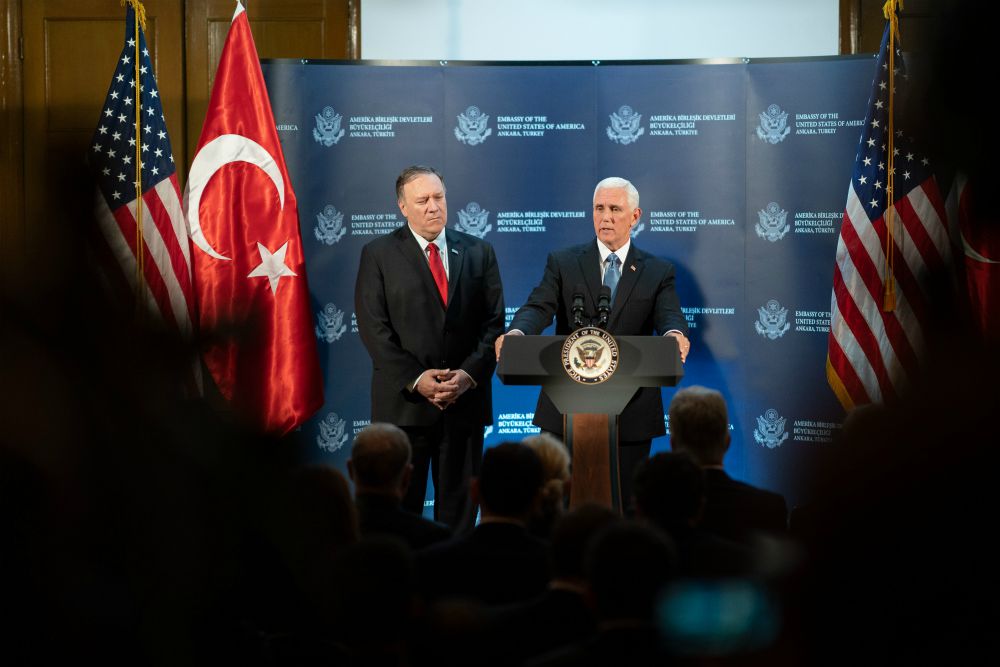 President Donald Trump's decision to abandon our Kurdish and Syrian democratic allies is an act of treachery of the highest order. He has left these groups — who lost thousands of soldiers in the effort to destroy ISIS — to the arms and ire of the Turkish and/or Syrian government, exposing not only soldiers who have stood by our side, but tens of thousands of civilians who have fled the terrors of ISIS or Syrian President Bashar Assad or both. The Trump administration's attempt to put a brave "peacekeeping" face on the humiliation of this self-imposed defeat by sending Vice President Mike Pence to negotiate a mere pause in the capitulation does nothing to efface the stain of the treachery.

To be sure, governments have committed treacherous acts before. Many of us recall NATO's unwillingness to support Dutch peacekeepers in Srebrenica, Bosnia 24 years ago, leaving 8,000 Bosnians to the mercy of Gen. Ratko Mladic's genocidal army. There was no mercy, and the 8,000 were slaughtered in a matter of days.

We now know that Richard Nixon conspired to frustrate the U.S. government's attempts at a peace accord in 1968 because he feared such an achievement would ruin his chances to win the presidential election that year.

We recall that the Red Army, as it neared the Polish capital of Warsaw in 1944, encouraged an uprising by the Polish underground in the city, but once it began, the Soviets pulled back, refused to offer any support and even denied the British and American air forces use of a landing ground in order to drop supplies. Last month, I visited the Museum of the Warsaw Uprising with friends, and none of us had dry eyes as we made our way through the exhibits of horror, all of it the result of Stalin's treachery.

But you need to return to the War of Spanish Succession to find an exact historical analogy in which a country ordered its soldiers in the field to desert an ally, exposing those allies to the wrath of the enemy alone. In May of 1712, the Duke of Ormonde, already in the field with the Dutch and Imperial allies, received orders "to avoid engaging in any siege, or hazarding a battle" because the government in London hoped a separate peace with France was about to be achieved. There was a postscript: "I had almost forgot to tell your Grace that communication is given of this order to the Court of France, so that if Mareschal de Villars takes, in any private way, notice of it to you, your Grace will answer accordingly. If this order is changed on either side, we shall, in honour, be obliged to give notice of it to the other."

Honour? The British government of the day had every right to negotiate an end to their participation in the war, but to conceal that fact from their allies of more than 10 years, while disclosing it to the enemy, when the armies were in the field, was to make of those allies sitting ducks for the French. Well could a future historian say of the episode, "Nothing in the history of civilized peoples has surpassed this black treachery."

Until now. Trump has done the exact same thing. He not only abandoned the Kurds: He has exposed them to the overwhelming and merciless power of the Turks.

Sen. Mitt Romney spoke for the nation's conscience when he took to the floor of the U.S. Senate last Thursday and condemned the president's decision to flee Syria. "It strikes at American honor," he said. "What we have done to the Kurds will stand as a bloodstain in the annals of American history." Romney went further and asked how the decision came about, and if Trump had merely acquiesced to an ultimatum from Turkish President Recep Erdogan, that our bully caved to their bully. Romney called for hearings into the matter. I wonder if the explanation is not found in the demonstrable affinity this president has for dictators. No matter the reason, the loss of honor is acute.

It is strange that honor has no source or precise corollary in Christian ethics. But a statesman whose word is no good is no statesman at all, and he can bring nothing good to his country or the world in the conduct of diplomacy. Who would trust this president ever again? The feckless Pence's attempt to put lipstick on the pig by negotiating a delay in Erdogan's aggression fooled no one except his own boss and Sean Hannity.

The rest of us know. The world knows. Previous incidents of shameless behavior by other countries in other ages do not excuse Trump's actions in Syria, nor relativize them. We are witnessing a shameful episode in the nation's history, made more shameful precisely because we recall those earlier episodes. It is one thing to disagree with a president, but quite another to feel ashamed at what he has done in the nation's name. Having undermined democratic norms at home, he now undermines the credibility of the United States abroad. His abandonment of the Kurds is not an impeachable offense, to be sure, but it is utterly indefensible.