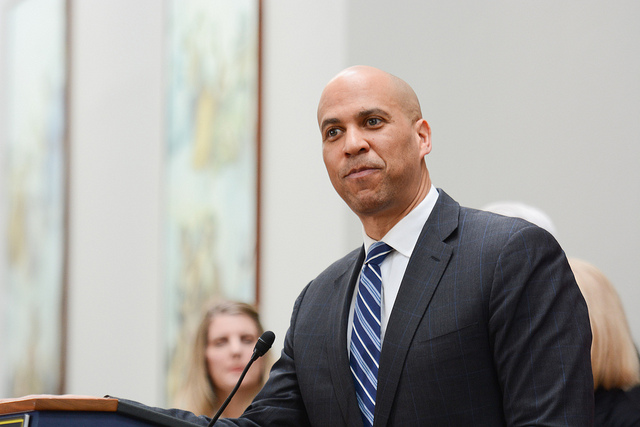 Sen. Cory Booker of New Jersey should be one of the leading candidates for the Democratic presidential nomination. He checks so many different boxes that other candidates leave unchecked, it is hard to see why he has not catapulted to the top of the polls, but he hasn't. Still, if there is any sleeper in the race, I think it might be Booker.

Booker has the perfect resume. Unlike most senators, he has executive experience as a mayor of a large, diverse city and he was, by most accounts, a very successful mayor. He lived in public housing, he saved a neighbor from a house fire, and he has done all the non-partisan things a mayor must do from fixing potholes to balancing a budget. I have always thought having a mayoralty in one's resume is a huge plus.

Unlike Mayor Pete Buttigieg, who has been garnering so much buzz, Booker has also been more than a mayor. He went on to win a seat in the Senate where he has been a stalwart partisan, confronting Republican judicial nominees, and also demonstrated an ability to work across the aisle to pass criminal justice reform legislation and provide economic stimulus for areas like Newark that were economically depressed.

Charm oozes from Booker. One of his first media appearances after he announced his candidacy was on the Rachel Maddow show. The two have a friendship dating back to their time at Stanford where, among other things, Booker played football. His participation in that all-American sport should offset the fact, incomprehensible to me and millions of Americans, that Booker is a vegan, an issue that has seemed not to concern Democratic primary voters even in farm country, but which is an obvious target for Republicans and the kind of cultural campaign President Trump will necessarily be running.

Senator Booker has introduced one of the most interesting policy ideas: baby bonds. Every child born in America would get a $1,000 bond when it is born. The government would add additional amounts each year for poorer families. The money cannot be touched until the child turns 18, and then can only be used for wealth creation: a down payment on a house or tuition at a college or the cost of an apprenticeship. The idea has the potential to address not only income inequality per se, but to close the wealth gap between white families and black and Latino families. Currently, the median white family has ten times the accumulated wealth of the median black family, a disparity that has only grown in recent years.

Of course, Booker has not been hostile to wealthy donors. He suffers from the disadvantage that comes from representing a state that is swimming in pharmaceutical companies, and taking lots and lots of money from those companies, just before heading into an election in which the cost of prescription drugs is going to be a major issue. He also is the first Democratic candidate to have a Super PAC even though he claims he doesn't want one.

Booker invokes the "beloved community" frequently, a concept popularized by Dr. Martin Luther King Jr., but which originated with philosopher Josiah Royce, a contemporary and colleague of William James. Earlier this year, David Brooks proclaimed Joyce "the philosopher we need today." If Booker can convince the polarized American people to place Roycian love at the center of politics, he will have achieved something quite remarkable.

Why then has Booker's campaign not generated the kind of buzz that Sen. Kamala Harris did when she first jumped into the race? Or which Mayor Pete has commanded in the past couple of weeks?

Part of the reason is that his answers to questions have become a little too formulaic, and the formulas are always pristinely politically correct. He speaks the language of the Ivy Leagues with too much fluency: His riff on "our common pain" falls flat because the discrete pains he describes are not common, so it does not actually describe our common history nor our contemporary experience. He lapses into checklists of causes and constituencies. Voters would like him more and trust him more if he managed to have one decidedly non-PC moment and then refuse to apologize for it.

The related reason Booker does not inspire confidence from voters is the flipside of why he is an inspiring speaker: The invocation of the "beloved community" seems appropriate coming from a preacher like Dr. King, but it is either naïve or arrogant coming from a politician. Americans want a president who will keep them safe in dangerous times, and all his talk about love makes one wonder if he would have the backbone to order troops into combat when necessary. The confusion of priestly and political roles raises questions about the enormity of his ambitions: About five minutes into his stump speech you want to ask him why he has never read Jean Bethke Elshtain's wonderful book Augustine and the Limits of Politics. When politicians promise the eschaton, they are over-promising.

It is early yet in the campaign.  Booker might yet catch the national mood of exhaustion with Trump's divisiveness. On the other hand, I suspect there are plenty of Democrats who do not want to love the party opposite, they want to punch Trump in the nose. They might vote for Booker to be their pastor, but not their president.