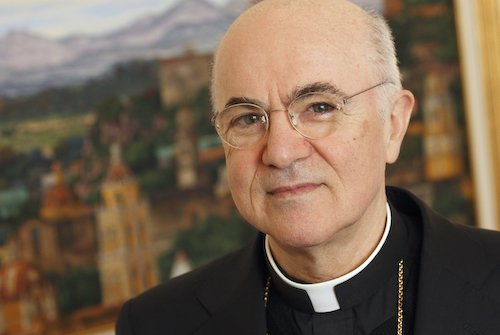 Italian Archbishop Carlo Maria Viganò, former apostolic nuncio to the United States, is pictured at his residence at the Vatican on Oct. 20, 2011 (CNS/Paul Haring) 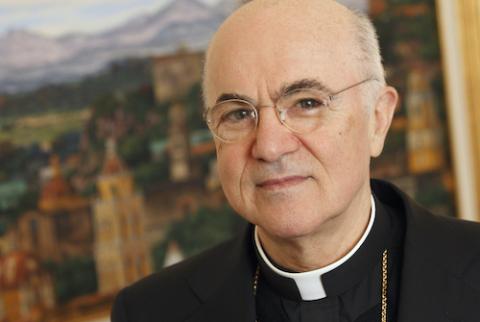 Italian Archbishop Carlo Maria Viganò, former apostolic nuncio to the United States, is pictured at his residence at the Vatican on Oct. 20, 2011 (CNS/Paul Haring)

No, President Donald Trump's decision to send out a tweet saying how honored he was to receive an unctuous letter from Archbishop Carlo Maria Viganò, the former apostolic nuncio to the United States, does not amount to a hill of beans politically. What interest the development holds — apart from its exquisite voyeuristic value — is on the religious side of the church-state ledger.

Let us start with the voyeurism. These two men, both in their mid-70s, both born into wealth, the archbishop as obsessed with his grievances as the president is fixated on his, obviously share an affinity for conspiracy theories. I was so hoping Viganò would bring up the Third Secret of Fatima with the president, expecting Trump to think he was talking about a housekeeper at Mar-a-Lago.

In other respects, they are quite different. Viganò is something of a modern Savonarola, convinced that sexual licentiousness, and especially homosexuality, is the root of all that ails modern society and the church.

Trump is a sexual libertine who, weeks after a mass shooting at a gay nightclub in Orlando by a man who claimed to belong to an Islamic terrorist organization, told the 2016 Republican National Convention, "As your president, I will do everything in my power to protect our LGBTQ citizens from the violence and oppression of a hateful foreign ideology." One could be cynical and conclude Trump thought his evangelical Christian base disliked Muslims even more than gays, but there is nothing in Trump's long public career to suggest the kind of homophobia the archbishop routinely displays.

I do not agree with David Gibson, director of the Center on Religion and Culture at Fordham University, who told the Tablet, "Trump is on dangerous terrain with white Catholics. Catholics who support him may not love Pope Francis, but if they see the president attack the Pope they may not be happy." The majority of white Catholics vote Republican, and they have long been willing to shop in the Catholic teaching cafeteria in order to support their candidates. (Of course, the cafeteria phenomenon is found on the Catholic left too, but they are not a part of the current brouhaha.) Catholics who support Trump are not likely to be moved by an attack on a pope they probably do not much care for anyway. 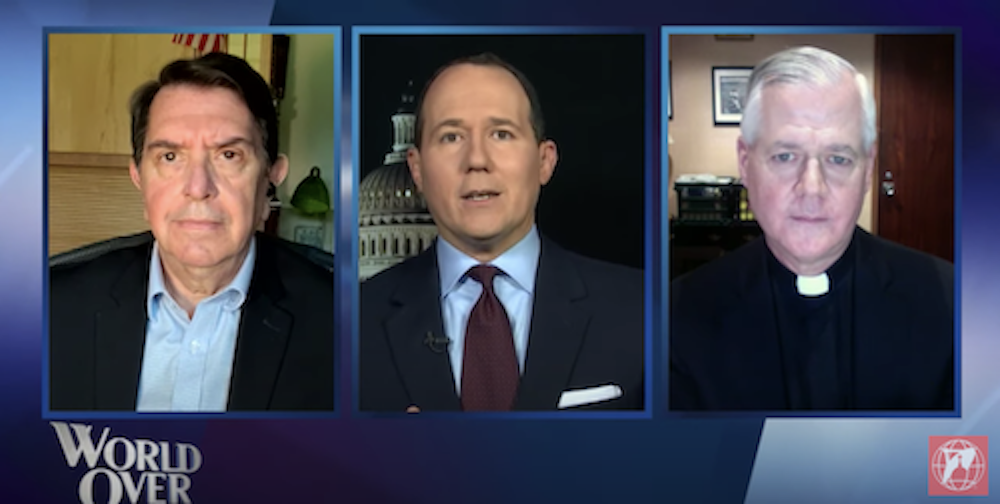 Robert Royal, Raymond Arroyo and Fr. Gerald Murray (NCR screenshot from The World Over on YouTube)

Raymond Arroyo and his "papal posse" on EWTN —  Fr. Gerald Murray and writer Robert Royal — did not spend too much time talking about Viganò but used his letter to complain about the treatment Trump received at the hands of Washington Archbishop Wilton Gregory when Gregory spoke against Trump's photo-op at the St. John Paul II Shrine. It was mind-numbingly absurd. Arroyo and his guests argued that Gregory was showing his antipathy toward the president and that bishops are well advised to respect the office of the presidency, no matter who is in the White House. None of the three remembered the treatment President Barack Obama received when he went to the University of Notre Dame in 2009.

While it is doubtful the Viganò episode will cause any political fallout, it might cause some Catholics to reconsider their religious stance. Arroyo's television show is one of the ways news items and opinions migrate from the extreme Catholic fringe into the mainstream of conservative Catholicism. I suspect Viganò's letter was so filled with craziness, even Arroyo knew it was a mistake to call attention to it. But, with his tweet, the president apparently introduced millions of his fellow Americans to the fact that an archbishop with a long and influential career can also write things that can charitably be called deranged.

Up until the president's tweet, Viganò's letter had been reported at LifeSiteNews, which is a fringe outlet. Those who frequent the site would not be alarmed by the bizarre conspiracy theories and apocalyptic tenor of the archbishop's letter. That is standard fare there. When items cross over into the Catholic mainstream from LifeSiteNews, usually via EWTN or their news service the Catholic News Agency, then the bishops need to pay attention and worry about the consequences. This time, it was the president's tweet that drove millions to the LifeSiteNews website. I wonder what they will make of the offerings there. Most Catholics, most conservative Catholics, do not question the Second Vatican Council, do not hate gay people, do not think the Second Coming is just around the corner and it will be bad for just about everyone. The pre-conciliar understandings of the faith the site peddles bear no resemblance to the teachings of St. Pope Paul VI, or St. Pope John Paul II, or Pope Emeritus Benedict XVI, that is, the teachings most Catholics have heard at Mass these many years.

I hope these first-time visitors to LifeSiteNews are appropriately horrified and rethink what they mean when they call themselves "conservative," maybe even reconsider whatever biases they have against Francis. But, change their politics? Not a shot.

Related: Tweet from Trump puts controversial Archbishop Viganò back into US politics