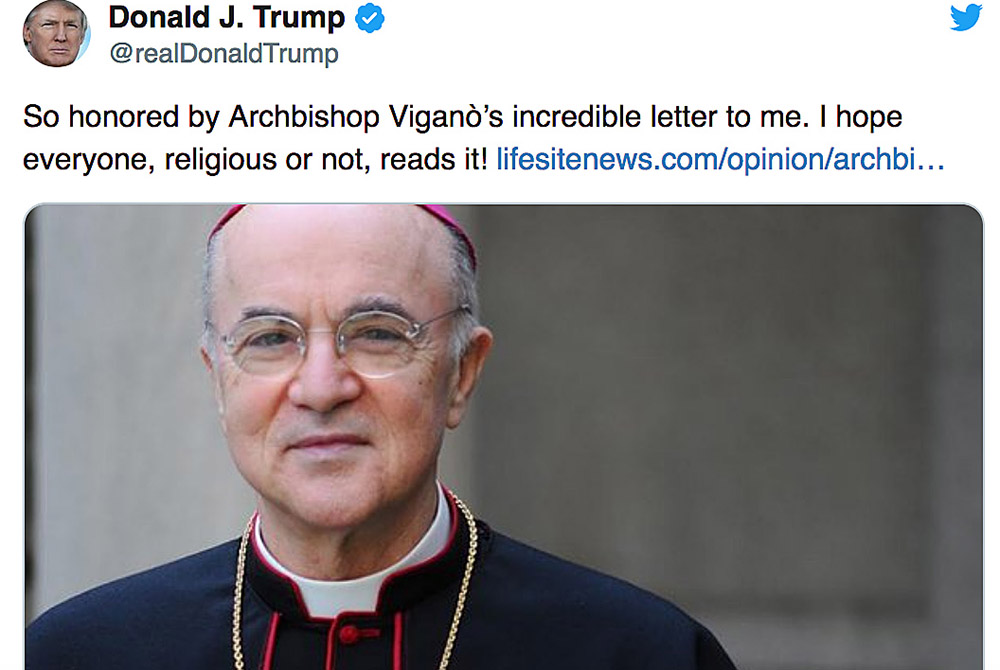 U.S. President Donald Trump tweeted June 10 that he was "honored" by an open letter written by Archbishop Carlo Maria Viganò, who served as nuncio to the United States from 2011 to 2016. (CNS photo/Twitter)

With one tweet, President Donald Trump introduced Archbishop Carlo Maria Viganò to a wider audience Wednesday night and returned the controversial Italian prelate into the fray of American politics.

The president wrote on Twitter June 10 he was "honored" by an open letter that Viganò, the former Vatican ambassador to the U.S. (2011-2016) and frequent Pope Francis critic, had written him days earlier and encouraged his 82 million followers to read it.

The letter was published June 6 by LifeSiteNews, a far-right website based in Canada known for extremist views on abortion and homosexuality and as a regular sounding board for the pope's critics.

In the letter, Viganò, 79, praised Trump and used veiled language about "the children of light and the children of darkness." He claimed that restrictions to prevent the spread of COVID-19 were part of a Masonic plot to establish a new world order.

Viganò also claimed that "civil disturbances" in the wake of George Floyd's death in police custody were provoked by "deep state" operatives because "the virus is inevitably fading" and "the social alarm of the pandemic is waning."

"Deep state" is a conspiracy theory alleging the existence of a hidden cabal in countries and within government offices that are attempting to undermine or usurp the authority of the legitimately elected government.

In his letter, Viganò praised the president for "wisely" opposing the "children of darkness whom we may easily identify with the deep state" and claimed that restrictions to stem the pandemic were a "colossal operation of social engineering."

He also dismissed recent protests against racism and police brutality across the U.S. and around the world, claiming they were an instrument used to influence the upcoming presidential elections and "build a world without freedom."

The former nuncio also alleged the existence of a "deep church" within Catholicism made up of "mercenary infidels who seek to scatter the flock and hand the sheep over to be devoured by ravenous wolves."

Viganò told Trump that "both of us are on the same side in this battle, albeit with different weapons," and he lauded what he saw as the president's efforts to promote Christian values, including the president's controversial visit June 2 to the St. John Paul II National Shrine in Washington.

The letter to Trump was released four days after Washington Archbishop Wilton Gregory denounced that visit, saying it was "baffling and reprehensible that any Catholic facility would allow itself to be so egregiously misused and manipulated in a fashion that violates our religious principles."

The visit to the shine came a day after federal authorities used tear gas and rubber bullets against peaceful protesters of racial injustice outside St. John's Episcopal Church in order to clear the way for Trump and Cabinet members to walk from the White House to the church for a photo.

Viganò later referred to Gregory as among "false shepherds" in a separate letter June 3 he addressed to the Washington Archdiocese. That letter, too, was published by LifeSite, which has started a petition requesting an apology from Gregory. 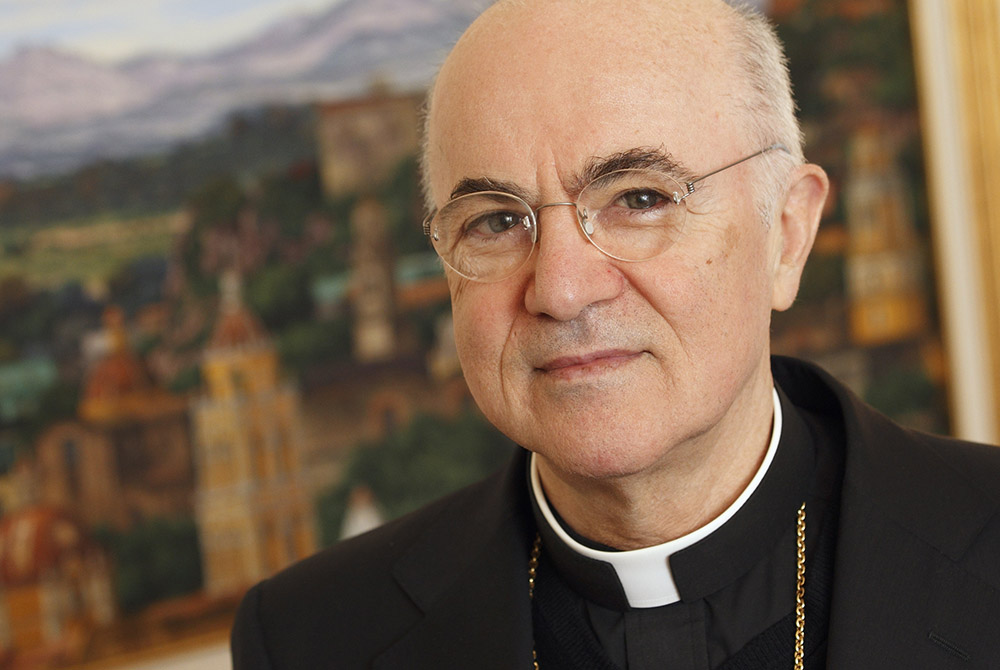 Italian Archbishop Carlo Maria Viganò, former apostolic nuncio to the United States, is pictured at his residence at the Vatican in this Oct. 20, 2011, file photo.

The episode comes as Trump has actively courted Catholic support for his reelection. The president has conducted two phone calls with Catholic leaders, and his campaign has launched a Catholics for Trump coalition. Members of his campaign team, as well as surrogates like anti-abortion activist Fr. Frank Pavone, shared Trump's tweet about Viganò.

A poll conducted in late May by the Public Religion Research Institute found Trump's support among white Catholics had dropped to 37%, down 12 percentage points from 2019.

After being removed as nuncio to the U.S. in 2016, Viganò resurfaced in church politics during the summer of 2018, when he issued an 11-page testimony accusing dozens of former and current high-ranking church officials of covering up sexual abuse allegations by former cardinal Theodore McCarrick. The archbishop accused Francis of being part of the cover-up and called on him to resign.

Viganò's allegations have been contested by reporting and several U.S. cardinals. Cardinal Marc Ouellet, prefect of the Vatican's Congregation for Bishops, called Viganò's claims an "unjust and unjustified attack on the facts" and "a political frame job." The Vatican is expected to release at some point its report on McCarrick, who was defrocked by Francis in 2019.

Church watchers have described Viganò as "extremely disgruntled" and attributed his attacks on Francis in part to frustrations in not being elevated to a cardinal and being denied promotions within the Vatican.

Viganò, who was in the center of the "Vatileaks" scandal, has been in hiding since his 2018 testimony went public. But he has continued to issue critiques of Francis and other church officials through friendly church websites and news outlets.

He criticized Francis' high-profile Feb. 2019 Vatican summit on sexual abuse for not addressing homosexuality. The former nuncio also condemned the Amazon synod in October for what he called "appalling idolatrous profanations" and said St. Peter's Basilica should be reconsecrated.

During an April interview with a Portuguese website, Viganò claimed there was a conspiracy in the Vatican to cover up the third secret of Fatima. In May, he signed onto a letter criticizing global measures to contain the coronavirus pandemic as "unjustifiably" violating personal freedoms, including the freedom to worship.

That letter led to a public spat between Viganò and fellow right-wing hero Cardinal Robert Sarah, who said that he never signed onto it.

During his time as Vatican ambassador to the U.S., Viganò was no stranger to interjecting himself into American politics. Along with recommending a number of "culture warrior" bishops to prominent archdioceses, he actively supported campaigns opposing same-sex marriage and abortion.

During Francis' U.S. trip in September 2015, Viganò arranged for the pope to meet with Kim Davis, a Kentucky law clerk who made headlines months earlier by refusing to issue marriage licenses to same-sex couples.

In July 2018, a month before his testimony published, Viganò was accused of directing two auxiliary bishops to destroy a document related to the investigation of alleged sexual misconduct by former St. Paul-Minneapolis Archbishop John Nienstedt. Vigano has denied any wrongdoing.

[Brian Roewe is an NCR staff writer. His email address is broewe@ncronline.org. Follow him on Twitter: @BrianRoewe. Catholic News Service contributed to this report.]

A version of this story appeared in the June 26-July 9, 2020 print issue under the headline: Tweet from Trump puts controversial Archbishop Viganò back into US politics.