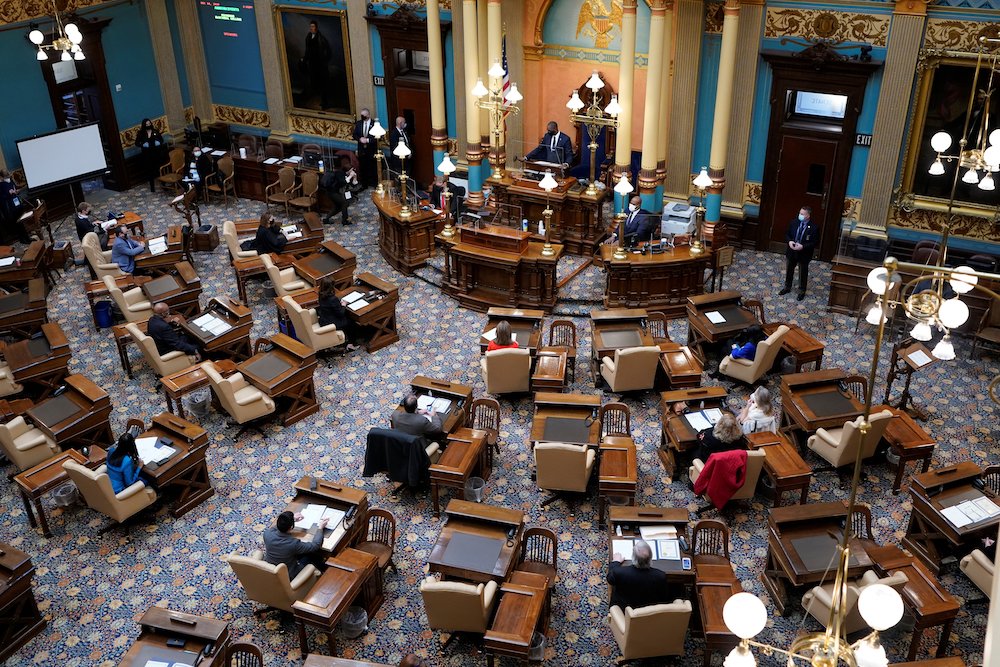 Michigan Lt. Gov. Garlin Gilchrist opens the state's Electoral College session at the state Capitol in Lansing Dec. 14, as the state cast all of its votes for President-elect Joe Biden. The Electoral College voted Dec. 14 to confirm Biden as president-elect when U.S. electors in each state cast their votes for president. The total was 306 for Biden and 232 for President Donald Trump. (CNS, pool via Reuters/Carlos Osorio)

On NCR's Facebook Live event on Dec. 16, Mark Kennedy Shriver correctly noted that the American people want President-elect Joe Biden to bring the country together, that most Americans are tired of the inability of politicians to come to agreement on addressing the nation's problems, and that Biden was the man to do it.

It is true that no one is better equipped to help heal the nation and restore confidence in government than Biden. But in order to unite the country, he needs the cooperation of the Republicans, or of at least some of them. What about the Republican Party's behavior in the weeks since the election would lead us to think they want to shed their Machiavellian approach to governance?

Senate Majority Leader Mitch McConnell needed 38 days after the election was called on Nov. 7 before he would acknowledge that Biden had won. President Donald Trump, of course, attacked him on Twitter the next day. Still, McConnell's long silence helped cement the idea in the minds of millions of Republicans that there was something fishy about this election, even though Biden won by the exact same Electoral College margin that Trump did in 2016 — 306 to 232. Then it was a landslide and now it is suspect.

Sen. Ron Johnson of Wisconsin has long been one of the leading sycophants in the Trump court. On Wednesday, he held a hearing of the Senate Committee on Homeland Security and Governmental Affairs, which he chairs. He, Sen. Rand Paul of Kentucky and Sen. Josh Hawley of Missouri repeated many of the conspiracy theories about election fraud that have been ably debunked. Indeed, at the Dec. 16 hearing, Chris Krebs, recently ousted head of the Homeland Security Department's Cybersecurity and Infrastructure Security Agency, testified that the election had been secure, that rumors about corrupted internet servers ignored the existence of a paper trail that confirmed the results generated by the computers.

Hawley thinks he knew better. He said he had spoken to 30 constituents back home and "every single one of them, every one of them, told me that they felt they had been disenfranchised, that their votes didn't matter, that the election had been rigged. These are normal, reasonable people, these are not crazy people."

The issue is not whether or not the constituents are crazy but where they get their information, and if they have been listening to Fox News or Rush Limbaugh or Gateway Pundit, you can bet they have been fed a steady diet of conspiracy theories and misinformation.

These Republican senators are not stupid men. They knew Biden had won about the same time I did, 4:30 in the morning after election night. Maybe it took them a little bit later. Maybe they only knew when the AP and every network called the race on the following Saturday. But they knew long before this week. Why then the obfuscation?

I suspect that Republican leaders recognize that their 40-year run as the party that sets the terms of political debate is coming to an end, and they will do anything, or almost anything, to put off the day when they lose power — because they know they could lose it for a long, long time.

It was Ronald Reagan who brought a contempt for government into the White House. "The nine most terrifying words in the English language are: 'I'm from the government, and I'm here to help,' " he liked to say, turning Hayekian nonsense into political gold. It was Reagan who campaigned on the nostalgic theme "Make America Great Again" and who trafficked in racist tropes that created a sense of grievance among many, too many, white working-class voters. It was Reagan who enacted policies that continue to shape our nation's economic life, increasing income inequality and diminishing corporate responsibility. If you have been watching the Showtime documentary on the Reagans, it is eye-opening how often he paved the path that Trump would trod 40 years later.

To be sure, Reagan was not vulgar like Trump, and the paths he paved could have led elsewhere. But it has been obvious for some time that the social contract Reagan renegotiated needs renegotiating again, that laissez-faire economics has not lifted all boats but has drowned too many fellow citizens, that it is evil to promote racism for political gain, and that we need a government that is competent and has enough power, expertise and empathy to do things like protect the populace during a pandemic. And the fact remains that those paths Reagan charted did lead to Trump.

McConnell and his buddies no doubt believe that the plutocracy they oversee is just dandy. For them and their rich friends it is. They certainly recognized Trump's ability to do what they had failed to accomplish, energize new voters. And, so, they have been willing to indulge the president in the hopes of retaining the allegiance of Trump's adoring fans.

It won't work. As we are seeing in Georgia, Trump's most loyal acolytes are in schism from the state's GOP. At one of last weekend's rallies to support the president's coup attempt, the crowd chanted "Destroy the GOP!" after conservative commentator Nick Fuentes complained too many Republicans were not doing enough to overturn the election result. I have to admit, watching the video of the rally, I hoped this one chant would really resonate.

Biden will no doubt try to unite the country. It behooves him to advocate for policies that make it as easy as possible for some moderate Republicans to jump ship. Remember that on Election Day, while Floridians were giving Trump a relatively easy win, 51% to 48%, they were also voting to raise the minimum wage to $15 an hour by a margin of 61% to 39%. The economic mess Biden is likely to inherit further requires an aggressive, progressive economic policy. Odd as it may seem for someone as unlike both Trump and Reagan as a politician can be, it may be Biden who begins establishing a new, more humane social contract for the country.